Illinois men’s basketball is going in the right direction 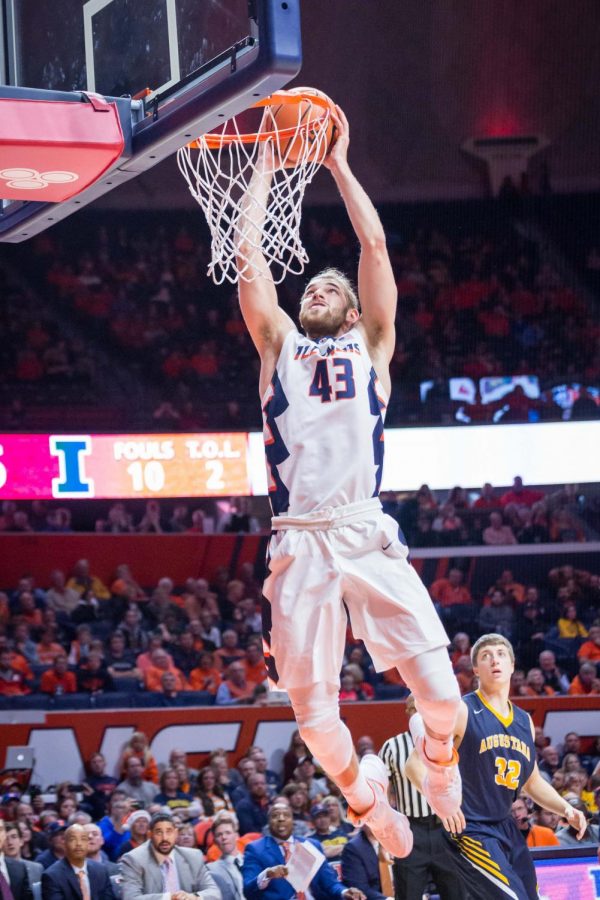 Illinois forward Michael Finke jumps for a slam dunk during the game against Augustana at the State Farm Center on Nov. 22. 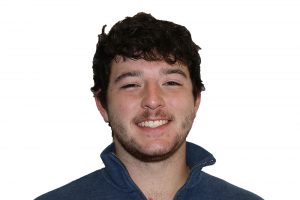 While the Illinois men’s basketball team is just 12 games into the start of a brand new era of Illini basketball, there is already a noticeable change in vibes about the program.

There’s a group of highly touted freshmen who have dazzled so far this season.

There’s a group of solid vets who are continuing to lead this young team.

And finally, there is a team that is exactly 23 points away from being undefeated at 12-0, that currently sits at 8-4.

Now, there’s a lot to make of all of that, but to break it down best, I will break it into sections.

While 8-4 is not necessarily the ideal record considering the team’s schedule to date, it’s certainly not a bad start. They picked up a solid win against a decent DePaul team, and while they have not been able to close out against other formidable opponents, they have been literally bounces away from winning in each of their losses. As I mentioned earlier, the combined score differential from their four losses is just 23 points, an average of 5.75 per loss.

All things considered, that’s not bad at all.

The schedule ramps up following a big win against Longwood, including two tough tests before heading into Big Ten play: one against a good New Mexico State team and then Braggin’ Rights against a surging Mizzou team. While the record doesn’t necessarily say it, I trust that Underwood and Co. will have his squad in order come Big Ten play.

The freshmen drew some of the most excitement I’ve seen around this program in a while, and so far, they’ve lived up to the hype.

Mark Smith started off the year hot, and though he has had some tough games, he has been generally good so far. When he gets to the rim, he’s basically automatic, and in games like UNLV when his shot is falling, there’s no stopping the man. He’s started every game but one, and it is clear he is going to get a lot of action in Big Ten play as well.

Trent Frazier has been phenomenal as of late. He’s shown flashes of it all year, but over the last couple of weeks, he has looked dominant. Something must have clicked with Frazier because he looks more confident than ever and is getting everything to fall. We saw it for the first time against UNLV when Frazier and Smith clicked on the same night, and that duo finished at the rim at will, while outside shots fell all game. It’s really fun to watch, and I expect to see it more often as the year goes on.

Da’Monte Williams has been one of the most consistent of the bunch. He has struggled to get his shot to fall at times, but for a kid coming off a torn ACL and transitioning to college basketball, he has been great. He’s a lockdown defender, and when he gets in that offensive zone, he can score with the best of them. It’s only up from here.

The other two new guys, Greg Eboigbodin and Matic Vesel, have not seen as much time, but have been solid in the time they’ve gotten.

Vesel has only made a couple of appearances, but it’s clear the talent is there. While we may not see him much this season, I expect him to be a huge part of this team in the long run.

As for Eboigbodin, he has shown some real flashes as of late. As a relatively late bloomer, you can see he is still pretty raw at times, but he has talent. He can grab boards with the best of them, and his length alone can make him an elite rim protector one day. He is not there yet, but his growth since the start of the season is very encouraging.

I won’t go as deep with them as I did the freshmen because they’re much more known to the fans, but it’s important to point out a few things with this group.

First off, Aaron Jordan. Jordan has been phenomenal this season, and I never saw it coming. He has been automatic from three and has been the perfect first man off the bench for this young team. We just saw him start for the first time against Longwood, where he proceeded to score a career-high 22 points and collect eight rebounds. In addition to his offense, he has provided great defense and some much-needed leadership. Look for the junior guard to keep it up.

The bigs have all been very solid this season. On a team lacking size, Michael Finke, Leron Black and Kipper Nichols have done what they need to do to step up and to fill that role. Black has been arguably the best player this season, and although he and Nichols are injured right now, they will play huge roles come Big Ten competition. They are too important to this team for them to survive without, and hopefully, they are back sooner than later.

As for Finke and Nichols, they have also both had their moments. Finke has gotten in trouble in a couple of big games, and it will be interesting to see how Underwood plans to defend Big Ten centers. With a smaller team, it has been tough so far, but the team has gotten by. Look for a big conference season from all three of the big men.

Te’Jon Lucas has also been very solid so far. Though he has not found his shot, he’s been much better lately and is starting to get in a rhythm. He’s the truest point guard on this team, and I expect to see him continue in that role while hopefully getting his shot to fall. Lucas has played a big part in helping the freshmen adjust, and he will be a huge key to the rest of the season.

Is this a tournament team?

Honestly, who really knows, but I will say this.

With such a young group and a relatively soft schedule, it is going to be a tough rest of the season. There will be growing pains, and building up a strong enough resume would likely include a solid Big Ten Tournament run and winning upward of 20-23 games, something that will not be easy with losses to each of their toughest opponents this season.

But, it is not impossible. The talent is definitely there, and Underwood is a proven winner. If anyone can get this group there, it’s him.

So, to wrap this up, while the future of this season is uncertain, there is one thing that’s pretty universally agreed upon: This program is heading in the right direction, and the Underwood era is officially underway