Illinois soccer’s rough season has team looking to the future 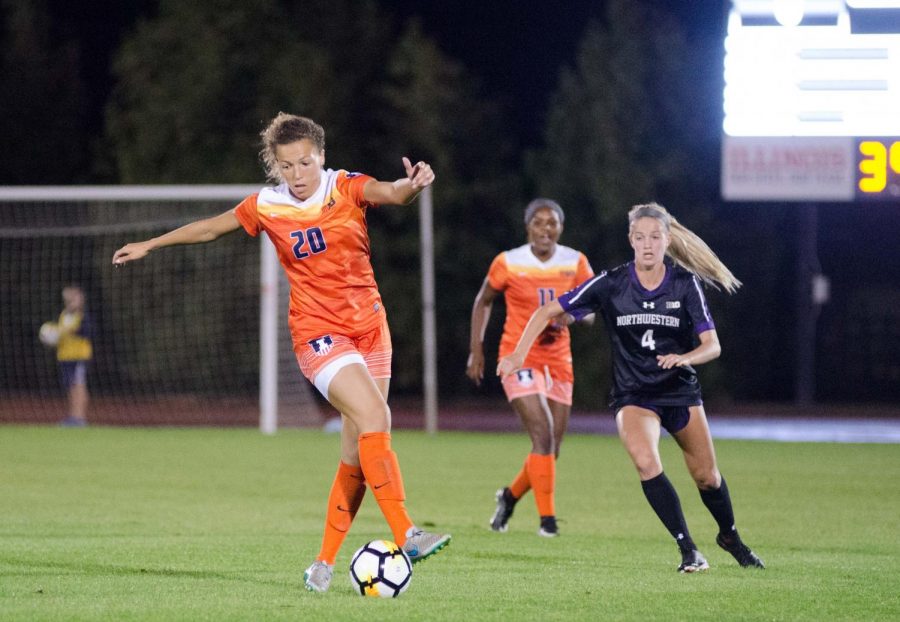 Senior forward Kara Marbury uses her footwork to advance the ball into Northwestern territory. The Illini won the matchup against the Wildcats 1-0, but that would be the Illini’s last win of the season, ending it with a four-game losing streak.

Coming off the heels of a less-than-stellar 2016 campaign, Illinois soccer was looking for a bounce-back season.

However, with many underclassmen on the roster, it was realistic to expect a rebuilding season from Janet Rayfield’s 2017 squad. While a 5-14 record is nothing to celebrate, Rayfield hopes it will lay the foundation for a successful future in Illini soccer.

Illinois opened by welcoming three consecutive power conference opponents, opening with a 3-1 defeat to Missouri, followed by a 2-1 victory over Depaul and then a 2-1 loss to Washington.

Sophomore midfielder Arianna Veland stood out early on, as she bagged two goals in the opening three matches.

The Illini then went on a seven-game road trip that ended with mixed results. Illinois was beaten 2-0 at Illinois State, but followed that with victories against Evansville and Miami, Ohio. Things got worse when Illinois went to Oklahoma for matchups against its two biggest schools, Oklahoma State and Oklahoma. Illinois dropped both fixtures and sported a 3-5 mark heading into conference play.

Illinois received a rather rude awakening when conference play kicked off in Columbus, Ohio, losing 7-0 to Ohio State. That disappointment was followed by another defeat, this time in double overtime at the hands of Penn State.

Illinois returned home, but the losses continued to pile up; both Maryland and Rutgers came to Champaign and earned victories.

However, the Illini did become the first team to score a goal against Rutgers and its U-20 US women’s national team goalkeeper, Casey Murphy. Rayfield took that as a positive and as a sign of improvement as the season progressed.

“I think it was another great effort from this Illini team that is really forming a personality that I’m really proud of in terms of the way they fight and the way they work,” Rayfield said. “Results aren’t always in your control, and I thought we battled back. Rutgers hasn’t given up a goal all year and (we) got one and thought we had a second one, so credit to our team I think for fighting today.”

As Illinois went on a two-game trip to Indiana sporting a six-game losing streak, the idea of trusting Rayfield’s process and continuing to play hard was on the players’ minds.

While Illinois could not break the streak in West Lafayette against Purdue, falling 1-0, the team finally nabbed a victory, as they won 3-1 against Indiana. Rayfield hoped the victory would spring her team on to further success.

“What you always get from Kara is an unbelievable work rate and an unbelievable desire to compete,” Rayfield said. “As we’ve started to play better soccer and keep the ball, it allows her to get higher and get closer to the goal, and that’s creating more chances, and she was able to finish two of those.”

The high note of Illinois’ season would follow, as Marbury again found the back of the net to defeat Northwestern, 1-0.

While it looked as though the season was turning around, the Illini would close the season on a four-game losing streak in which they failed to score.

Going forward, Rayfield knows the Illini’s inability to consistently find the back of the net hurt them, and developing that skill will be key for success next season.

“When you look at our performance, we’ve got to develop our players into goal-scorers. That is something we’ll look to do as we move on to next season,” Rayfield said. “I don’t think there was a game this season, except for Ohio State, that we didn’t feel like we could compete with the (other) team on the field. We’re gonna step out next fall expecting that we can compete with anybody in the country.”