Thoughts and predictions on Underwood after winter break 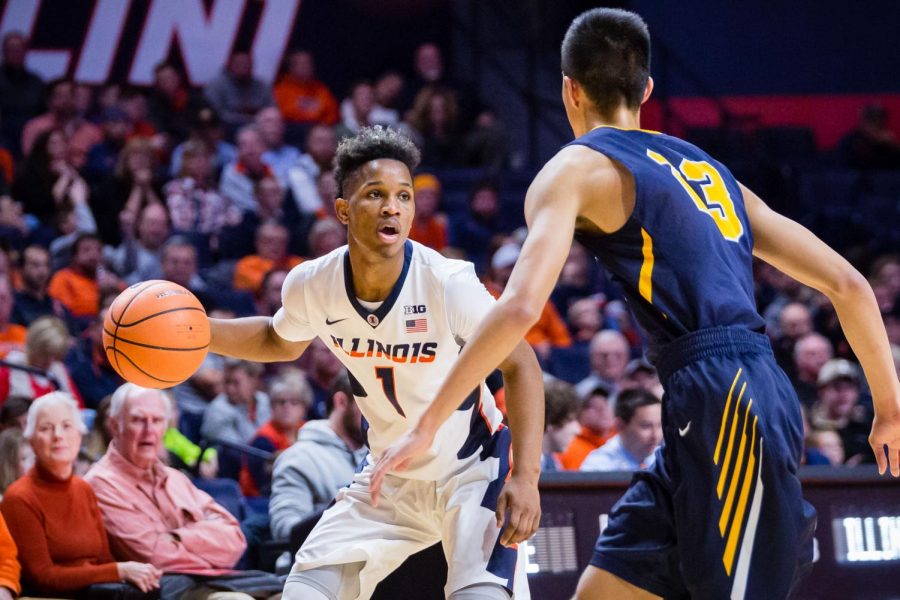 Illinois guard Trent Frazier looks for an open man during the game against Augustana on Nov. 22. The team under Brad Underwood hasn’t performed quite as was anticipated.

After a long, much-needed break, we are finally back on campus and ready to get the second semester going. However, while students were home for the holidays, the Illini men’s basketball team’s season was in full force.

The team played five games, going just 2-3 after dropping a couple of tough games and starting the Big Ten season at 0-5. There were ups and downs, highs and lows, but let’s take a look at some of the biggest developments from over break.

The start of the year was all about Mark Smith and his spectacular finishes at the rim, but over break, a couple of new stars emerged. Trent Frazier and Greg Eboigbodin played some of their best basketball games of the season, including career highs in all aspects for both players, and some huge moments in big games.

Frazier has been on fire as of late, averaging just over 15 points per game over the last eight games, including a career-high 27 against Iowa, and some extremely clutch moments in the games against Missouri and Michigan. While he didn’t get a ton of minutes at the beginning of the season, Frazier has certainly earned his spot and has cemented himself as one of the starting guards in Brad Underwood’s rotation.

Ebo has also had a great stretch of play. While his numbers may not jump out as strongly as Frazier’s, the amount of growth he has shown since the start of the season has been astounding, and he is carving out a very nice role for himself in the rotation. On a team that severely lacks big men, Ebo has already become probably the best rim protector on the team, and has even contributed his share on the offensive end. His post moves can be lacking at times, but 3-feet and in he has been able to finish with some strong dunks and using his size to his advantage. While Michael Finke struggles, Ebo is only getting better.

The story all season long has been the inconsistency of this team. For the first stretch of games, it was the slow starts, falling behind early in games. Recently, it’s been hot starts with the inability to close out.

No matter the order, the issue remains the same.

When looking at scores, especially if you look in half-to-half scores in majority of games, there has been one dominant half in the majority of the Illinois games. This has been for various reasons such as turnovers, poor shooting, bad defense or more. But, what’s kept Illinois from winning the majority of its games is a lack of discipline. Looking at the entire schedule so far — Wake Forest, Northwestern, Maryland, UNLV, New Mexico State, Minnesota, Michigan and Iowa — every game has been winnable but that came down to one bad half. If you didn’t notice, that’s eight games, and not-so-coincidentally, the Illini have eight losses.

While this is obviously disappointing, it also shows how good this team can and should be. In the halves where everything is flowing well — first half at Michigan, second half against Maryland, etc. — this team can be dominant. The lack of big men obviously hurts, but the guards can take this team a long way and Leron Black can certainly hold his own down low. A record of 10-8 is not where I would have imagined the Illini to be right now, and though the tournament is not necessarily out of the question yet, there is still a lot to fix, and the schedule is not getting any easier. Underwood and Co. will certainly be making their adjustments.

Where they go from here

So, with 13 games remaining, where will the Illini go from here?

Looking at the remaining opponents, it’s still very tough. After Nebraska, Illinois goes on the road to Wisconsin, returns home to take on Michigan State, plays a tough Indiana team and more. While I do firmly believe the talent is there to win most of these games, I do not see the rest of the season getting much better than where we are now.

Teams like MSU, Wisconsin, Purdue and Indiana are going to absolutely bully Illinois inside, and unless a lot of guys step up their games, the guards will not be enough to win. Frazier and Black will get their points, but without a legit rim protector and a lot of other pieces that this team is missing, there are not going to be any instant changes for the rest of this season.

While the team may struggle, here are a few things I predict will happen before the year is over.

Ebo will enter the starting lineup. This will happen for a few reasons. Finke has really struggled to get comfortable in Underwood’s system. The stretch-forward that we all expected to thrive with Underwood has not lived up to the hype, and he simply does not get it done well enough on the defensive end. On the other hand, while Ebo may not be the most polished player yet, he is already better on defense and is only improving. He very well may be one of the staples of the rotation in the future, and what better way to show that then sticking him into the fire for the rest of Big Ten play?

The Illini will upset a couple of top teams. While this may not seem that bold, I do think it is something that will happen. No matter which way you look at it, Illinois has been strong on defense and has given other teams trouble with how tight they play. The OSU’s and Michigan State’s of the conference have not seen Illinois teams play like this, and I can definitely see at least one of them folding under the pressure. Look for at least one or two big wins before the season is over.

Frazier to lead in scoring. This might be the boldest prediction with Black’s big year so far, but I think it is very possible that Frazier will take over the team. While there is no questioning Black’s abilities, Frazier has been the go-to guy at the end of games and is not afraid to take over. Black will continue to face foul trouble as he guards the bigger opponents, and that will only force the ball to go through Frazier even more. Look for the young guard to lead the Illini in scoring when all is said and done.