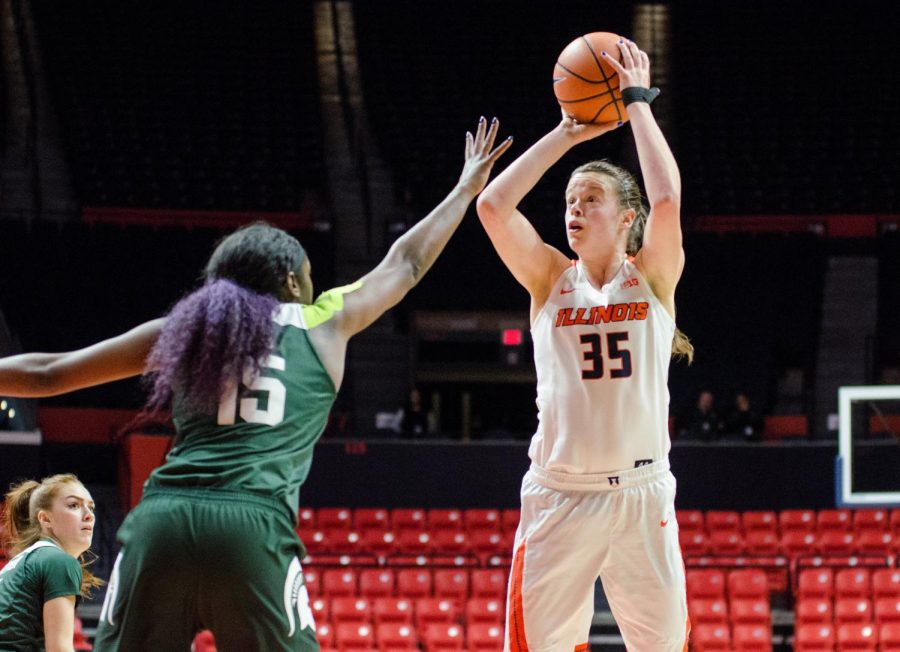 Illinois hasn’t seen much success in the Big Ten. This was no different Saturday evening when the Illini faced off against their first-ranked opponent during a two-game road stint.

“You look at the score and it’s a frustrating thing,” coach Nancy Fahey said. “And that’s the thing I was trying to tell (the players), that you know the frustration took the better of us a couple of times in different situations.”

The Wolverines out-scored the Illini every quarter, but Illinois’ fate was sealed after a 20-point performance from Michigan in the third period. Michigan outscored Illinois 4-to-20 in the third quarter alone and shot about 86 percent from the field during the second half.

There was an obvious change in the pace of the Wolverines’ game during the third quarter that set the Illini back, according to Fahey.

“I thought the first two quarters were rolling— down 13, I think we played particularly well,” Fahey said. “But their defense was obviously (good) and we had a lot of problems with scoring.”

The Illini resorted to a “2-3” zone offense, where a majority of scoring happens around the arc and a step or two towards the paint. According to Fahey, the Illini dropped the ball – somewhat literally – in this zone Saturday.

Michigan also silenced one of Illinois’ most lethal scorers – forward Alex Wittinger. Wittinger has collected five double-doubles so far this season and is positioned to make a permanent spot in the Illinois record books with 1,000 career points this season.

According to Fahey, the Wolverines double- and triple-teamed Wittinger, creating a challenge for one of the Illini’s most important assets.

“Despite the margin, you saw Alex get in there and try to battle,” Fahey said.

Key contributors like sophomore Courtney Joens stepped up despite the gap in scoring, Fahey said. Joens laced together her second start in a row with seven points and posted five boards.

Wittinger did, however, lead the Illini with eight points, along with sophomore guard Cierra Rice, who also netted eight.

Junior guard Jaelyne Kirkpatrick also returned to the court for the Illini Saturday after missing seven games. Despite coming up a little empty-handed in her Big Ten debut this season, Kirkpatrick delivered an added sense of energy to the court,  according to Fahey.

“I think she adds a spark to us,” Fahey said. “Coming off the bench, she talks really well. She gets the team organized and actually did a great job defensively.”

Illinois finished the contest shooting 18-for-66 from the free throw line and 5-for-21 in threes.