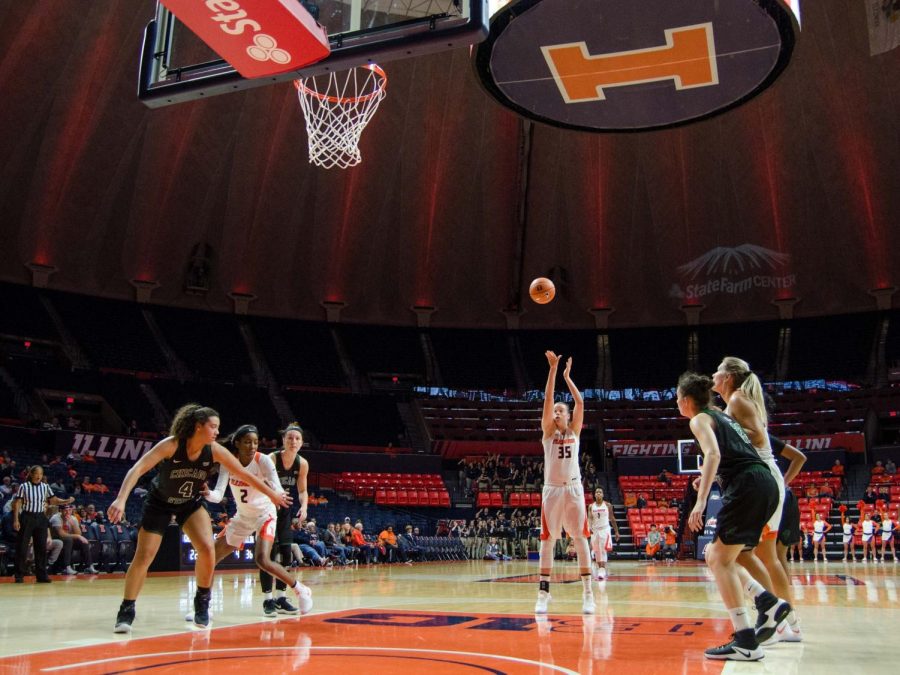 Illinois may have lost to Penn State Tuesday night, but for junior forward Alex Wittinger, the night marked a significant career milestone.

Wittinger tallied her 1,000-career-point in the midst of the Illini’s eighth loss in the Big Ten. Penn State edged Illinois 68-59, and Illinois now sits last in the Big Ten Conference with a record of 0-8 and 9-13 overall. With a little over a month left in the regular season, the  Illini are the only team in the Big Ten that have yet to win a game.

Wittinger locked down a triple-double Tuesday night, leading the team with 18 points, 10 rebounds and 11 blocks.

She is the second Illini ever to produce a triple-double and the only Illinois women’s basketball player to do so with blocked shots.

Head coach Nancy Fahey said that although Wittinger sunk her teeth into a school record, she wished that she could have done it with a win instead of a loss.

“We’re excited for Alex,” Fahey said. “But I know we wanted to do it in a different way. Although it is an individual accomplishment I know she appreciates her teammates passes and the ability to help reach that goal.”

Fahey also reflected on her journey alongside Wittinger during her first year as Illinois’ head coach this season.

“One of the first times I met her I asked her what her secret was,” Fahey said. “And she’s all about her angles – her angles and timing.”

Fahey said the team announced Wittinger’s achievement in the away locker room at halftime.

Penn State got off to a slow start in the first quarter but came back in full force with a 10-1 run during the final minutes. The Nittany Lions locked down a slight lead that they would hold onto for the entire game, ending the first period 14-11 ahead of the Illini.

According to Fahey, the game was all about tempo. The pace of the game kept changing, making it difficult for both teams to stay consistent Tuesday night.

“We had to play up-tempo sometimes,” Fahey said. “Then (Penn State) would kind of switch it back. There was a lot of switching back between zones, so we were just going to attack the basket.”

The third quarter proved to be another battle won by Penn State, however. The Nittany Lions moved ahead 48-38, marking the widest point-gap of the contest despite Illinois out-shooting Penn State 54-to-35 percent.

The fate of the game, however, came down to a tighter fourth-quarter showdown. Illinois and Penn State both collected 20 points each and made impressive runs from both sides of the court. Sophomore guard Brandi Beasley produced a massive 8-0 run in the last period and helped the Illini hold the Lions to only 23 percent of their shots, but it wasn’t enough for Illinois’ first Big Ten win.

Fahey said that Illinois’ loss was due to a lot of little things, including turnovers, and Penn State’s phenomenal shooting at the baseline.

“There were a lot of points out of their baselines and out-of-bounds plays which was a little frustrating for us,” Fahey said. “We’re starting to talk about four or five possessions that we want back and that we’d be taking a different way. That’s what changed things.”

Although Illinois added to its eight-game losing streak, the team showcased some major individual performances.

Beasley trailed Wittinger with 15 points and four rebounds, while sophomore guard Cierra Rice made 10 points for the Illini with three rebounds and going 2-for-4 from 3-point range.