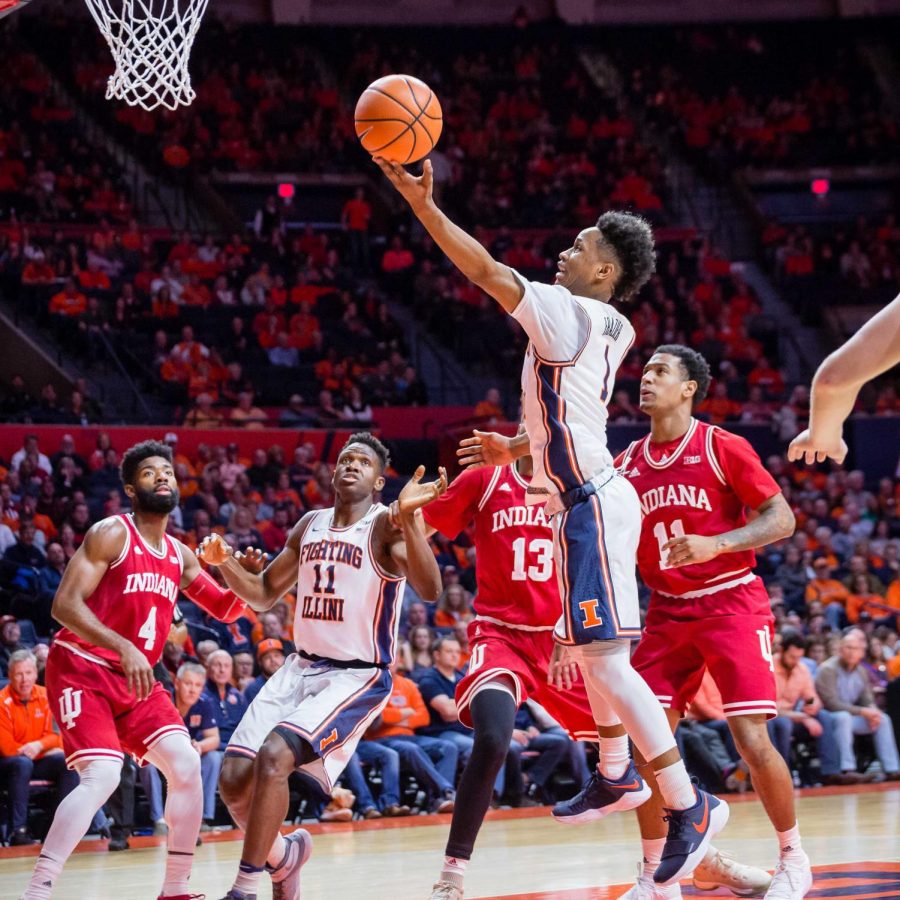 Illinois guard Trent Frazier goes up for a layup during the game against Indiana at State Farm Center on Wednesday, Jan. 24, 2018. The Illini won 73-71.

Up two with 8.3 seconds left, Trent Frazier had the chance to put the game on ice.

Illinois led Indiana 73-71 and two free throws would ensure the Illini’s first Big Ten victory of the season. The crowd went silent as Illini fans watched their standout freshman prepare to take the biggest free throws of his collegiate career.

After the second attempt, Zach McRoberts grabbed the rebound for the Hoosiers. But with the clock winding down, Indiana never got a shot off. Devonte Green turned it over on the team’s final possession, and Illinois survived.

“Here’s a young man that was happy we won and crying because he knew it wasn’t perfect,” said head coach Brad Underwood. “(But) without him, he’s never in that situation. I’m going to put the ball in Trent’s hands the rest of his career.”

Frazier scored 13 consecutive points to keep Illinois in the game in the first half, and finished with a team-high 19 points and three assists. Over his last five games he’s averaged 17.8 points and 3.8 assists.

He has emerged as the Illini’s best playmaker in the backcourt, but early on there were some growing pains. Through his first five games, Frazier averaged just 7.8 points and 1.8 assists.

“It’s my teammates and coaching staff,” Frazier said. “They have done an unbelievable job in helping me get my confidence back. I’ve been struggling the first half of the season, but I’ve really started to have a feel for the game.”

Underwood said most of Frazier’s maturation has been mental. The freshman is learning to read defenses better and progress through all of his options before making a play. These subtle adjustments weren’t necessary at the high school level.

At Wellington High School in Florida, Frazier averaged 27.6 points, 6.3 rebounds and 4.4 assists as a senior. He finished his career as the Wolverines’ all-time leading scorer with 1,742 points, posted a single-game school record of 52 points and finished runner-up in 2017 Florida Mr. Basketball voting.

But perhaps Frazier’s biggest accomplishment was helping his school win its first state title in 2015. Tied at 56, he drove to the hoop and was fouled with 0.4 seconds left. He stepped to the line and nailed the go-ahead free throw to secure Wellington’s one-point victory over Hagerty.

“I was really nervous,” Frazier said in a post-game interview with ESPN 106.3 FM. “But that’s why I practice … I box all of the sound out, take my time and knock them down.”

Nearly three years later, Frazier’s career came full circle. The ball was in his hands with a chance to help Illinois avoid the worst conference start in program history. He followed the same routine he had back in high school, but this time around he could not seal the deal.

It didn’t cost his team the game, and it didn’t stop the Illini from celebrating in the locker room. But it was another lesson learned on his basketball journey.

Frazier said Underwood pulled him to the side and reassured him, telling the freshman that he would trust him again with the game on the line.

“I’m going to be in that situation a hundred more times this year,” Frazier said. “I gotta step up and make those free throws, do it for the team.”