Illinois looks to pull even with Rutgers 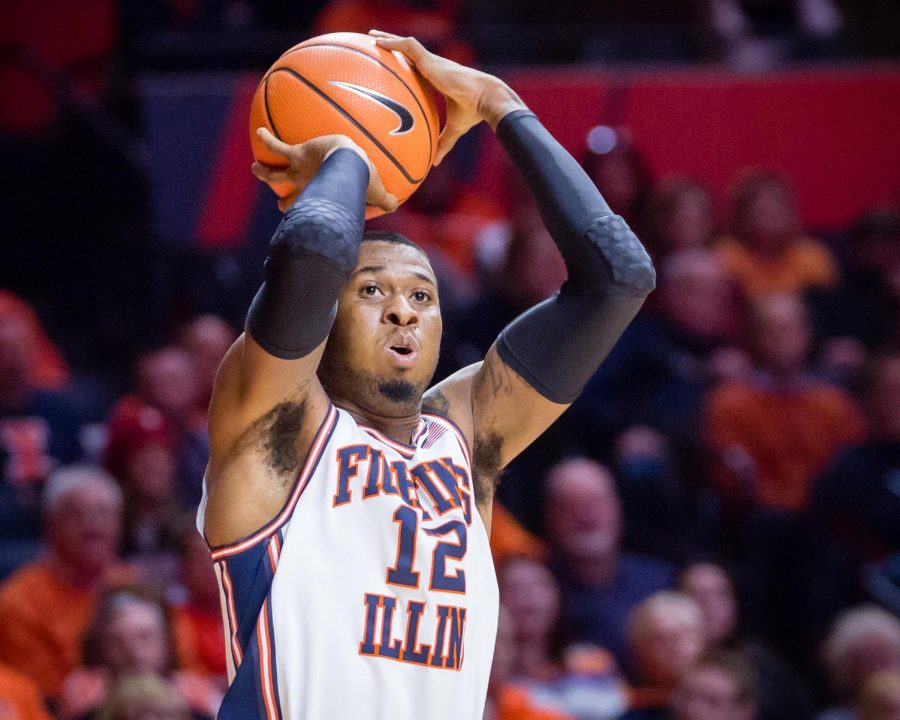 Illinois forward Leron Black shoots a three during the game against Indiana at State Farm Center on Wednesday, Jan. 24. The Illini won 73-71.

Trent Frazier drove down the lane, drew three defenders and kicked it out to Te’Jon Lucas. With a defender running at him, Lucas still had a good look, but swung the ball over one more time to a wide-open Kipper Nichols.

Nichols caught the ball, squared up and buried his 18th three-pointer of the season. The shot put Illinois ahead of Indiana by two possessions, and was the Illini’s only made field goal over nearly the final 11 minutes of the game.

The Illini are averaging 13.8 assists per game, ranked 11th in the Big Ten and managed to only dish out 10 against the Hoosiers. But Underwood said that they practice making the extra pass every day, and it will continue to be a point of emphasis against Rutgers on Tuesday night.

But Rutgers’ smothering defense hasn’t translated into much success on the other side of the floor. The Scarlet Knights are averaging a Big Ten-worst 66.7 points per game, and have lost five of their last six. The team scored a season-low 43 points in its most recent outing against Penn State and sits one game above Illinois in the Big Ten at 2-8.

However, the Scarlet Knights still have three players averaging double figures in scoring. Corey Sanders has been Rutgers’ leading scorer over the past three years, notching four 20-point games this season.

“Sanders is a guy that can go get (a basket),” Underwood said. “He’s a terrific midrange player. He’s got a great pullup (jumper); he gets you off balance. We have to do a good job on him.”

In just his third game back from suspension, Lucas will be one of the main defenders on Sanders. He did not play in matchups against Iowa, Nebraska and Wisconsin for violating an undisclosed team rule. He was held scoreless in his return against Michigan State, but scored 11 points on 50-percent shooting against Indiana.

“He does a lot of little things that don’t show up in a stat sheet,” Underwood said. “But they’re very, very important to winning.”

Underwood believes Lucas’ presence will take the load off of Frazier, as Illinois’ primary ball-handler and help create more spacing on the court.

In the Illini’s last game, that spacing was highlighted by Lucas’ extra pass to Nichols for what turned out to be arguably the biggest shot of the season. It also created more lanes to drive the ball and get to the foul line.

Illinois shot 23-of-32 from the charity stripe against Indiana, its highest total of free throw attempts in Big Ten play and its third-most in a game this season. The Illini are shooting 73.2 percent from the free throw line, while Rutgers is last in the conference at 63.2 percent.

The Illini are undefeated at home against the Scarlet Knights and are looking to earn their first back-to-back Big Ten victories since March of last season.

“I see a team that just continues to fight,” Underwood said. “I keep telling this team we’re not that far away.”