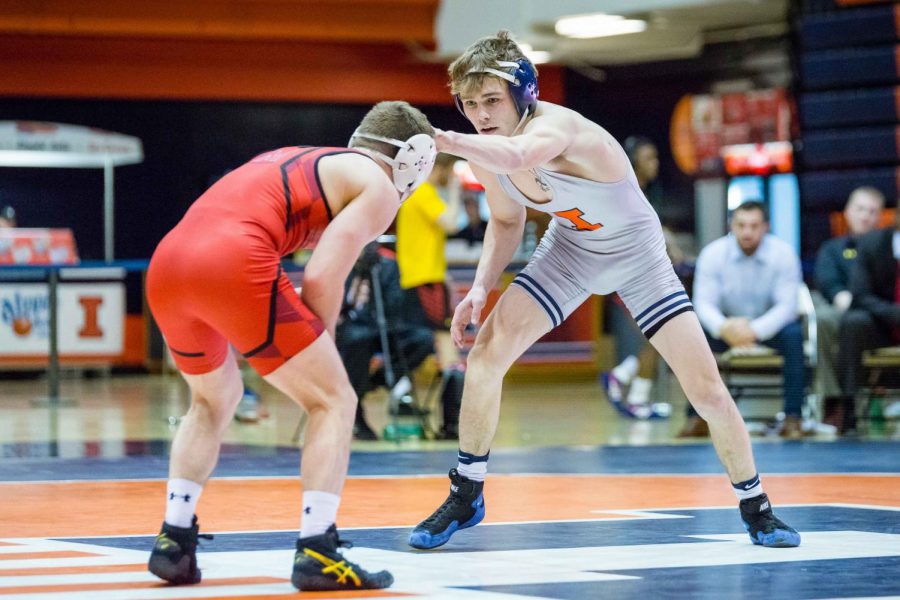 Illinois’ Travis Piotrowski wrestles with Maryland’s Brandon Cray in the 125 pound weight class during the meet at Huff Hall on Sunday, Jan. 28, 2018. The Illini won 25-18.

Maryland entered Sunday’s dual match looking for its first ever win against Illinois.

The Terrapins didn’t find it.

After scoring bonus points in each of its six victories, the Illinois Men’s Wrestling team defeated Maryland 25-18.

The Illini now have won 10 straight at home and improve to 5-3 on the season overall, 4-2 in the Big Ten. Maryland drops to 5-9 on the season and 0-8 in conference play.

Sophomore Travis Piotrowski started the dual off at 125 pounds against Maryland’s Brandon Cray. Piotrowski got off to an early lead, securing a takedown with 1:47 to go in the first period, followed by four points in the closing seconds of the first period to go up 6-0. He had an early escape in the second period, keeping Cray at a distance throughout while extending the lead 7-0. In the third period, Piotrowski secured another takedown, working his way to another near fall and an extra point from riding time to finish his match 14-0.

Following at 133 was freshman Dylan Duncan’s match against Jhared Simmons. Duncan dominated early throughout, starting with a takedown at the 2:13 mark and following that up with a near fall eight seconds later. In the second period, Duncan finished Simmons off with a tech fall to win, pushing the Illini to a 9-0 lead to start the dual.

“Those two guys are really young and really good.” Head coach Jim Heffernan said of Piotrowski and Duncan. “When you can get off to a good start it really makes a difference, and it’s good that we’re going to have those guys for a few more years.”

Marlyand tied the team score at 9-9 after two victories at 141 and 149. Maryland’s Ryan Diehl beat freshman Dylan Thurston with a pin, while sophomore Eric Barone lost to Maryland’s Alfred Bannister via a sudden takedown in overtime.

At 157, senior Kyle Langenderfer went up against Maryland’s Kyle Cochran. The first period was a stalemate, with neither being able to secure much riding time or score. However, Langenderfer managed to secure a tech fall at the 1:45 mark in the second period to secure the victory and push the Illini lead back up to seven.

Senior Isaiah Martinez followed up Langenderfer’s victory with a takedown immediately against Maryland’s Brendan Burnham. Martinez dominated throughout, securing nine takedowns and a second period tilt that would lead to a victory by tech fall. This win moved Martinez to No. 18 on the all-time wins list for the Illini.

“I’m probably not going to catch the number one spot this year because I’ve been wrestling internationally for the first half of the season, but I’m not really worried about that,” Martinez said. “I’m more concerned right now about getting the National Championship, and that’ll continue to be my focus.”

Maryland gained three more points at 174 pounds, as Josh Ugale won with a 9-6 decision over freshman David Riojas. Following Riojas’ defeat, junior Emery Parker (184) faced off against Maryland’s Niko Cappello. The two exchanged takedowns in the first early on, and Cappello managed an escape to go up 3-2. Up 6-4 early on in the second, Parker secured seven takedowns and two near falls, inching closer and closer to another victory by tech fall at the 0:38 second mark, pushing the Illini lead up to 25-12.

After officially securing victory, Maryland would go on to take the next two matches. At 197 pounds, junior Andre Lee went back and forth with Maryland’s David Brian-Whiseler. The match went into overtime, where Brian Whisler got a takedown to win the match.

“(Barone and Lee) have been in a lot of tight matches like that, and both need to find a way to win,” Heffernan said. “Those were two matches we thought we would win. When you’re in a match like this with opponents that are tough to score on, you just have to find a way to win, and that’s the bottom line.”

The dual concluded with another Maryland victory at Heavyweight, with Maryland’s Youssif Hemida beating senior Deuce Rachal in a 5-2 decision, making the final score 25-18 in favor of the Illini.

“Today, we did a good job scoring points and hustling, which we talked about a lot before the meet, so that’s good to see” Heffernan said. “It’s the fourth time Deuce has wrestled against (Hemida), and he’s continued closing the gap. His fire and energy were good. Isaiah looked very good, and Langenderfer looked good after a sluggish start, and Duncan has figured out ways to score from the top, which is all good news.”