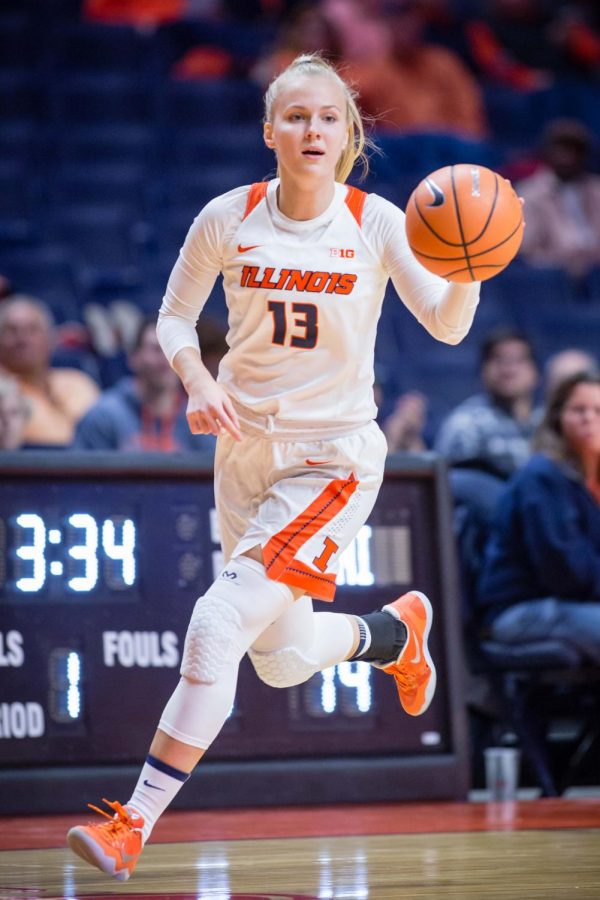 Illinois guard Petra Holešínská dribbles the ball down the floor during the game against Fort Wayne at the State Farm Center on Nov. 10, 2017. The Illini won 64-50.

Basketball has exploded into a phenomenon reaching far beyond the United States, just ask the members of the Illinois women’s basketball team.

According to the Pew Research Group, basketball is the second-most viewed sport globally, which shouldn’t surprise many Americans given 30.8 million people tuned in to watch the NBA Finals last year.

Sophomore guard Petra Holešínská and freshman Nancy Panagiotopoulou Andritsopoulou found their way to Illinois after growing up playing basketball in the Czech Republic and Greece, respectively. Holešínská was a key player for the Czech Republic National Team during high school and helped lead her club team to three national championships and one second-place finish at the European Champions Cup. She also rounded out her time before college playing in a professional basketball league.

Panagiotopoulou Andritsopoulou may be a freshman on the court, but she made several appearances for the Greek national team during the 2015 and 2016 FIBA Women’s European Championships before coming to Illinois.

But after competing with some of the best players in each of their respective countries, why did Panagiotopoulou Andritsopoulou and Holešínská choose to come to the United States?

For Panagiotopoulou Andritsopoulou, it was a long-awaited dream to play basketball in America.

“For my entire high school years, this is what I wanted to do,” Panagiotopoulou Andritsopoulou said. “I’ve been working so hard for it, so I knew I was going to come here.”

According to the 6-foot-3 Athens native, attending international school in Greece was an essential step in her journey to Illinois.

“I went to international high school, so many other student-athletes at my high school came overseas,” Panagiotopoulou Andritsopoulou said. “Also, my athletic director knows many people around here, and there are many Greeks everywhere – they really helped me.”

Unlike Panagiotopoulou Andritsopoulou, Holešínská wasn’t exposed to the American recruiting process until later in her high school career.

After competing at the world championships, Holešínská said she was approached by an American coach for the first time – exposing her to the possibility of playing collegiate basketball thousands of miles away from her home.

“(A coach) was in the Czech Republic and he watched me play,” Holešínská said. “I actually had other schools which were mid-majors, but (Illinois) was my biggest option.”

Former Illini Jenna Smith played basketball in the Czech Republic with Holešínská and helped introduce her to the Illinois program. Smith holds the program’s record for all-time scoring and rebounds, set in the 2009-10 season.

“We were really good friends with Jenna (Smith) and she was also one of the main reasons why I came here,” Holešínská said. “She loved it, I mean she’s the best scorer and best rebounder in school history and she really loved the campus, so we talked about it a lot.”

For both women, Illinois was a standout choice. But assimilating into American culture was a different story.

“It’s still different for me, especially the food,” Holešínská said. “My teammates had to help me a lot on and off the court at first. I know when we came in here it was just me and Cydnee Kinslow, and she basically showed me everything on campus.”

Panagiotopoulou Andritsopoulou said moving to America from Greece presented more of a challenge than what meets the eye.

“It was quite hard at first There are so many differences like in the way people behave,” Panagiotopoulou Andritsopoulou said. “I mean I’m kind of adjusted to it, but I can’t say that I like it. There are many things I don’t really like, but I’m getting used to it.”

In addition to social culture, the culture of basketball is notably different in America as well. According to Holešínská, adjusting to the American style of basketball during her freshman season was hard, but this year presents an entirely new wave of challenges as Illinois announced the hiring of new head coach Nancy Fahey.

“The competition, I feel like is more physical than back home. Back home it’s faster and the rules are kind of different,” Holešínská said. “We have a new coach, and we’re still learning, so it adds to it.”

In addition to relearning the game on American soil, Fahey said Panagiotopoulou Andritsopoulou and Holešínská’s success is equally as notable off the court.

“Just being in a different country, different languages, I’m just really impressed with their ability to absorb a lot of different things and still produce on the court,” Fahey said. “They’re obviously playing internationally, bringing a lot of experience that might be a little different.”

At the end of the day, the success of a team is not always drawn from the scoreboard or record book. According to Fahey, sometimes teammates can teach more about life than about the game of basketball.

“We aren’t all the same, we have different interests and backgrounds,” Fahey said. “I think it’s important if you can share that at an international level with your team and increases the educational value of being on a team.”