Illinois aiming to get first Big Ten win at Nebraska 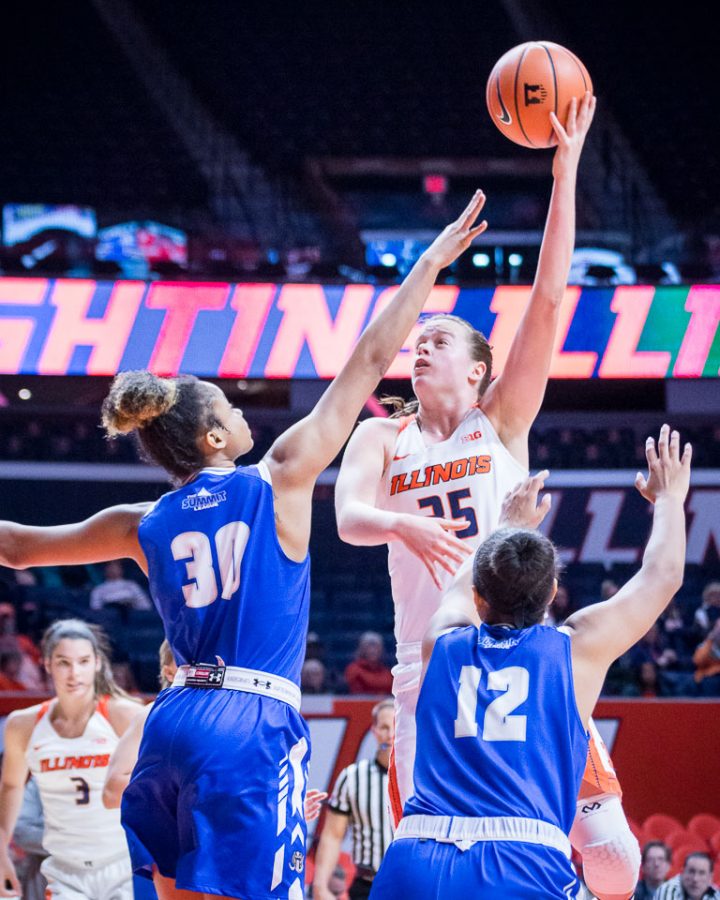 Illinois forward Alex Wittinger puts up a hook shot during the season-opening game against Fort Wayne at the State Farm Center on Friday, Nov. 10, 2017. Illinois won 64-50.

The last time Illinois saw Nebraska,  junior forward Alex Wittinger put up a season-high 23 points, but the Illini saw their overall record dip below 500 for the first time this year, falling 80-72 at the State Farm Center.

A lot can change in three weeks, especially in college basketball. But that couldn’t be less true for the Illinois women’s basketball team. The Illini have produced some well-rounded games this season, but have yet to sink their teeth into a conference win. In fact, Illinois hasn’t seen a Big Ten win in over a year.

On a more positive note, however, Illinois’ season isn’t over. After its Jan. 10 loss to the Cornhuskers, the Illini are looking for redemption in the return contest in Lincoln, Nebraska. Illinois enters the contest with an overall record of 9-14 (0-9 Big Ten Conference) while Nebraska comes in at 16-6 (7-2 Big Ten Conference).

Head coach Nancy Fahey said that her team knows the matchup will not be easy. The last time the two teams met Illinois was down by two points in the fourth quarter with a minute on the clock. Nebraska rang in enough last-second points to secure a victory – one Illinois hopes it can counteract this time around.

“It puts us in a position that the kids know this was a tough game,” Fahey said. “We played with them, obviously doing very well, but they’re at home (this time). I think it just gives kids a little different psyche when you’ve got a minute to go in a two-point ball game.”

Illinois nearly mirrored Nebraska in shooting percentage in the last meeting, hitting 45 percent of their shots, while Nebraska hit about 46 percent. At the free-throw line, Illinois netted about 68 percent of shots, and notably improved during the second half from 40 percent to a conversion rate of about 80 percent. Nebraska made about 63 percent from the line, staying consistent throughout the game.

Positively for the Illini, they only allowed six turnovers, compared to Nebraska’s 13. But Illinois came up short in the rebound and assist categories, with the Cornhuskers outrebounding the Illini 40-27, and posting 18 assists against 13 for the Illini.

Tipoff at Pinnacle Bank Arena is at 7:00 p.m. The game can be streamed live on FloHoops via fightingillini.com.