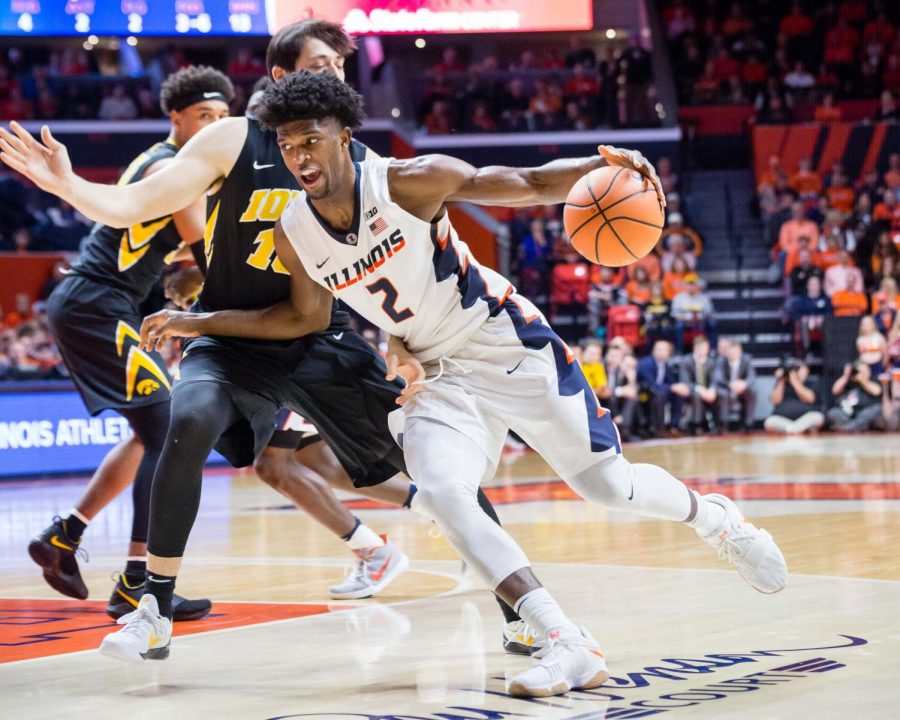 Illinois forward Kipper Nichols drives to the basket during the game against Iowa at the State Farm Center on Jan. 11. The Illini lost in overtime, 104-97, however, the Illini defeated the Scarlet Knights on Tuesday, 91-60.

I went into the Illini’s matchup against the Scarlet Knights expecting to see the beautifully terrible game I have grown accustomed to over the past few years, but Underwood and the Illini had different plans.

The matchups that have taken place over the past few years between the Illini and the Scarlet Knights – in football and in basketball — have been crazy to watch. No matter how good one team plays, the game always becomes ugly, and it always comes down to the wire.

Not on Tuesday, though. On Tuesday, the Illini decided to curb stomp them from the beginning, and then they never looked back.

How dare Underwood break this routine by preparing his team. That was the most boring game Illinois and Rutgers have had in years. I didn’t laugh once! I normally set the over/under at 10 1/2 laughs before halftime.

In all honesty, that was the best offensive game the Illini have played all season. Sure, it helps when your threes are falling, but they absolutely dismantled a normally good Rutgers defense. I really thought this was going to be a low-scoring contest. Trent Frazier, Kipper Nichols and the rest of the Illini proved me wrong.

In the past three games, Nichols has been absolutely huge. His game against Michigan State was just absurd, he put up a good game against Indiana and his play last night matched it. Before the season started, I listed Nichols as the most important Illini on the court. I didn’t think he was going to lead in any category, but I thought he would be up there in almost every one. I still think I am right. For the Illini to win games, Nichols needs to be active. He is the best athlete on this team, and he creates enough problems no matter where he is on the floor, to create space for his teammates.

Now that Nichols is making an impact again, opponents can’t hang back in the paint as freely and double Leron Black, or else Nichols can knock down the jumper. And when Nichols goes inside, he is drawing a lot of attention, taking some off Frazier. When the Illini have that third option on the court, it just makes them so much better.

That offense last night was fun to watch. I haven’t really said that at all this season.

Moving on from the game, let’s talk about the guest of honor. Deron Williams came to town, and it was awesome. It’s a shame that this was the only time he has been back since 2005, but he kept it real when talking about that 13-year gap. He didn’t like Mike Thomas. They didn’t get along, and that is not OK. Thirteen years is way too long for the best player to ever wear the the Illini’s jersey to not come back. I understand he has been in the league and the seasons overlap, but the University still should have persuaded him to come back at some point.

I am happy Williams got to see a good game last night, and I am also happy I didn’t actually see him in person. I know for a fact that professionalism would have been out the window if I would’ve gotten the chance to talk to him. Objectivity is tough when you meet your hero from age 10.

Illinois basketball is now on a two-game winning streak, and I have to say, they are exactly where I thought they would be. I never thought this was a tournament team, but while I do think I nailed the prediction that Nichols is the most important player, I air-balled when I said Frazier wasn’t going to be ready for Big Ten play. The kid has been balling, but it is pretty clear that he and Black can’t win games by themselves. The Illini need that third option, and it has been Nichols both games so far.