Illinois looks to knock off No. 17 Ohio State 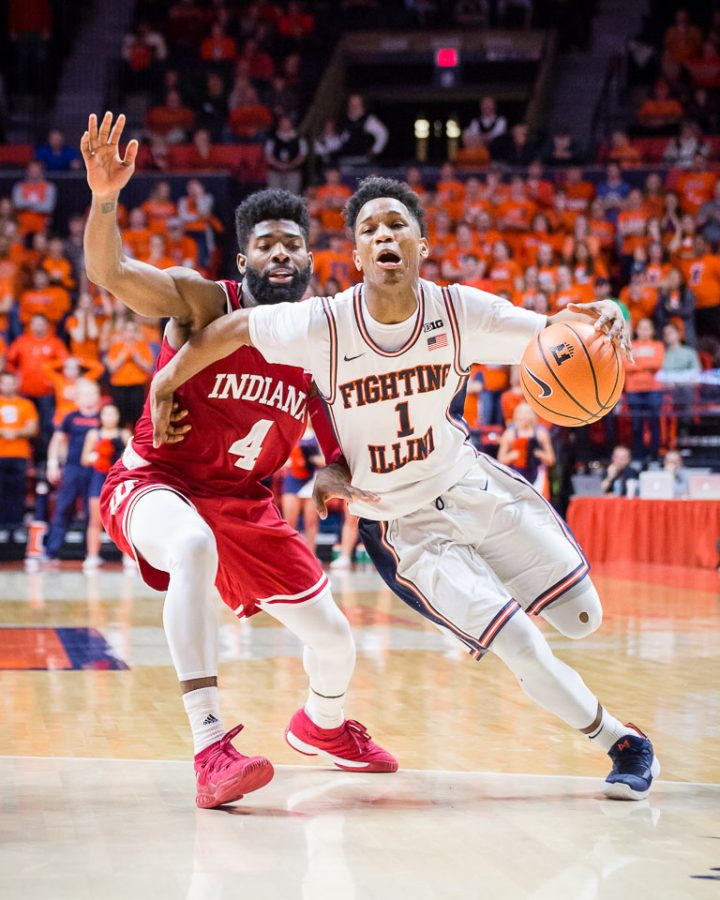 Illinois guard Trent Frazier tries to draw contact on his way to the basket during the game against Indiana at State Farm Center on Wednesday, Jan. 24, 2018.

That’s how head coach Brad Underwood described the freshman’s performance in the team’s last outing against Rutgers. Frazier knocked down five 3-pointers in just under four minutes, and scored 15 points during the first half of the Illini’s 31-point victory.

On Sunday, Illinois will face a more formidable opponent when it takes on No. 17 Ohio State.

“In my opinion, they’ve got the best player in the league,” Underwood said. “Keita (Bates-Diop) has had an incredible year. He scores it in every way possible. You put him with (Jae’Sean) Tate and those are two really, really good wings.

Tate and Bates-Diop are the Buckeyes’ leading scorers. Tate is averaging 12.9 points and six rebounds, while Bates-Diop leads the Big Ten at 19.6 points. The redshirt junior also leads his team with 210 rebounds and 45 blocks this season.

With a 6-foot-6, 225-pound frame, Underwood said Kipper Nichols will be very important in Illinois’ defensive schemes because of his versatility.

“He’s a guy that could very well guard (Jae’Sean) Tate and Kieta (Bates-Diop),” Underwood said. “We need that and he gives us that. That’s why he’s a vital, vital part of what we do.”

Nichols’ versatility isn’t limited to just defense. He has shown the ability to score in a multitude of ways on offense this season, and over the last three games it appears to be coming together. During that stretch, he is averaging a team-high 19.3 points per game on 60 percent shooting.

Frazier has also been on a tear lately. He’s scored in double figures in 12 of the last 13 games, and finished with 17 points in 19 minutes, after his offensive explosion against Rutgers.

“When guys get going with me, I’m riding that horse until it’s (over),” Underwood said. “I’m very, very much a heat check guy and Trent’s got that kind of ability.”

During Big Ten play, Frazier leads all freshmen in scoring, assists, steals and 3-pointers. His overall scoring average of 11.7 points per game are the most by an Illinois freshman since Dee Brown in the 2002-03 season.

While the Illini have relied heavily on their freshman, it has been the opposite for the Buckeyes. Ohio State has four players averaging double digits in scoring, and three of which are upperclassmen. Underwood said experience will be a key advantage for the Buckeyes, who are led by head coach Chris Holtmann.

Holtmann, like Underwood, is coaching his first season in the Big Ten. He has the Buckeyes sitting second in conference at 10-1, after winning just seven conference games all of last season.

The Illini are ranked second in the Big Ten with 7.5 steals per game, and have forced a turnover on 24.5 percent of their opponents’ possessions. Underwood plans on using this high-pressure defense to lead to an up-tempo offense, while handing Ohio State its second loss in three games.

“They go hand-in-hand,” Underwood said. “Good offense goes with good defense and vice versa. If we can become consistent shooting the basketball, we’ve got a whole other level to go to.”