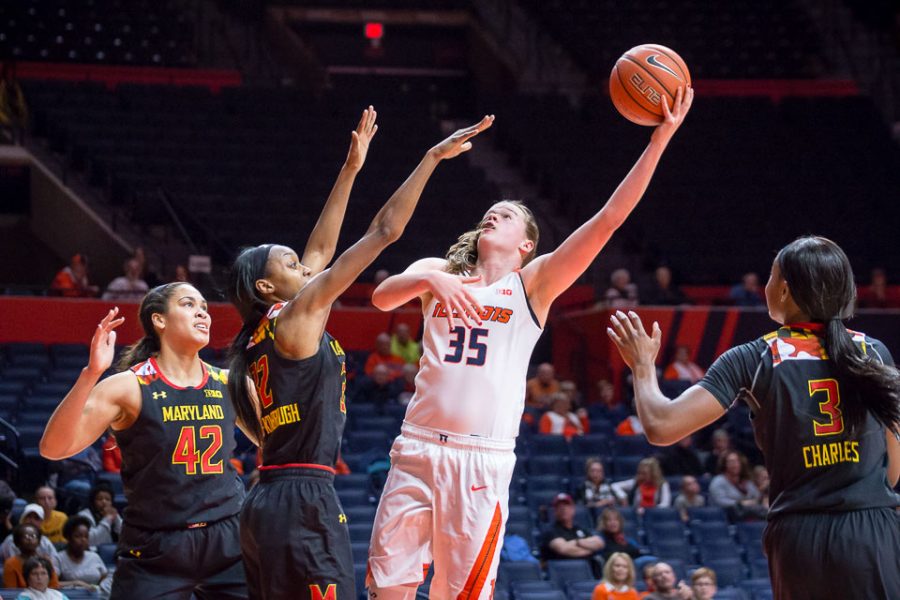 Illinois' Alex Wittinger (35) goes up for a layup during the game against Maryland at State Farm Center on Thursday, January 26.

The old cliché in basketball after a team loss is “they made shots we didn’t,” and while it is not the most original response, it accurately describes Illinois’ 73-54 loss to Purdue (16-8, 7-3 in the Big Ten Conference) on Sunday.

Purdue’s 6-foot-1-inch forward Ae’Rianna Harris asserted herself on the defensive end, blocking three shots and recording three steals. Illinois coach Nancy Fahey felt that Purdue’s size overall limited Illinois offensively, which caused the team to fail to even attempt a free throw until deep in the fourth quarter with the game out of hand.

“We’ve had that issue for a bit, not being aggressive off the bounce,” Fahey said. “They blocked some shots. We’re smaller; it’s tougher for us to get those shots up against those guys and draw fouls.”

The Illini’s inability to get to the charity stripe was due to the Boilermakers’ defense, which stayed out of foul trouble and allowed Purdue coach Sharon Versyp to get away with a shorter rotation.

“One of the things we pride ourselves on is our defense and staying out of foul trouble,” Versyp said. “We don’t have a long bench, so that’s been very important.”

While Alex Wittinger put up her usual contribution, leading the team with 20 points and eight rebounds, Illinois (9-16, 0-12 in Big Ten Conference) fell short, resulting in its 12th straight loss; however, Fahey stressed that the losing streak would not affect her message going forward.

“The message, quite frankly, is we have to live in the moment, and the moment now is playing Indiana,” Fahey said. “If you were at our practice, you’d be surprised (at) the energy level that this team has. This is tough (but) we gotta be tougher.”

Fahey’s inaugural season has not produced results on court, but her peers in the Big Ten coaching sphere do not foresee that continuing. Wisconsin coach Jonathan Tsipis had high praise for Fahey after the Badgers 70-61 victory in Champaign, and Versyp echoed the same sort of sentiments after the game as well.

“Nancy’s won championships, and she’ll build a program here,” Versyp said. “When I played, I went through three different coaches. A lot of teams at Purdue went through three different coaches, but it’s about the players being loyal to the program and they have to buy in. That’s the biggest thing any time you take over a program, and Nancy’s doing that, (and) the kids are playing hard for her.”