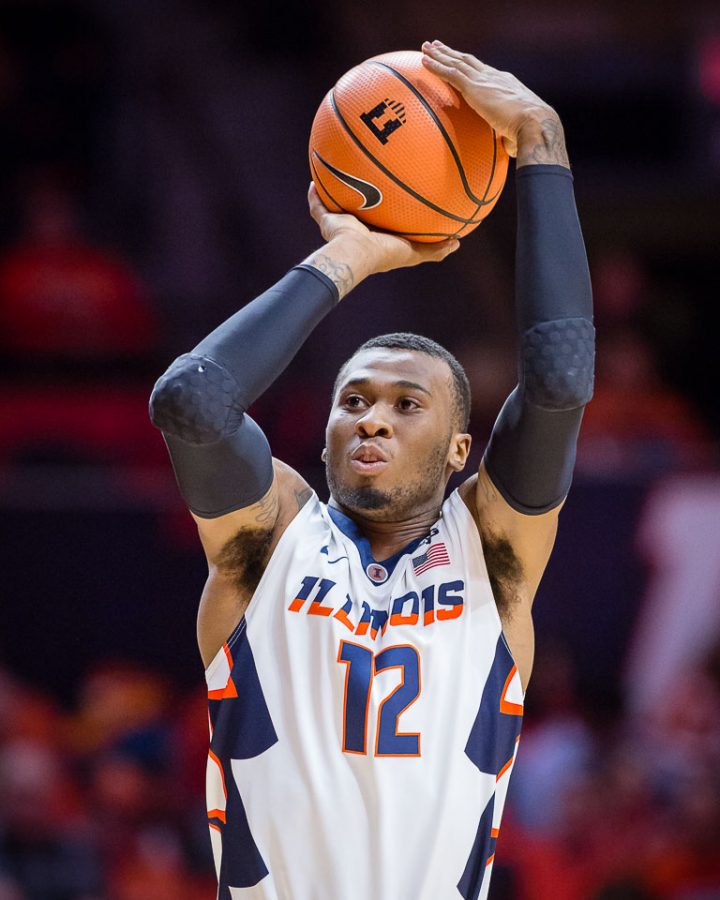 Illinois forward Leron Black (12) shoots the ball during the game against Wisconsin at the State Farm Center on Thursday, Feb. 8, 2018.

On Illinois’ final possession of the game, Te’Jon Lucas threw a skip pass to Kipper Nichols but it was too high. Nichols jumped to try and save it but the ball grazed his fingertips before sailing out of bounds.

It was the Illini’s 12th turnover of the game and a summary of their overall season. Illinois has stayed within striking distance in most of its contests, but when it’s time to seal the deal, winning seems just out of reach. On Wednesday, that trend continued in a 78-68 loss to Indiana.

“We got off to a really good start,” head coach Brad Underwood said. “That’s something that’s kind of been a common theme lately. Offensively we got going and (then went into a) drought again.”

In just the second start of his career, Greg Eboigbodin scored Illinois’ first points on a dunk. The Illini got off to a quick 5-0 start, and led for nearly the first eight minutes of the game. But after a layup by Lucas to put Illinois ahead 14-12, the team missed its next six shots and turned it over four times.

During that stretch, Indiana went on a 14-0 run and closed out the half with a 10-point lead. The Hoosiers made 55.6 percent of their shots in the opening period, while the Illini shot just 31.3 percent. Aaron Jordan made Illinois’ lone 3-pointer, as the rest of the team went 0-11 from behind the arc in the first half.

The Illini opened the second half on a 24-14 run, which cut the Hoosiers’ lead down to two. But that was as close as Illinois would get. Nichols had a chance to tie the game with two free throws, but missed the front end of a 1-and-1.

Illinois kept it close the rest of the way, but ultimately Indiana’s balanced offense was too much to overcome. Five Hoosiers scored in double figures, including Juwan Morgan. The junior recorded his eighth double-double of the season and blocked a career-high five shots.

“I think what he’s done for our team, on both ends of the floor, has been really big,” head coach Archie Miller said.

Leron Black and Nichols led the way for Illinois. Black scored a Big Ten career-high 20 points on 8-of-12 shooting, while Nichols scored all 16 of his points in the second half.

Underwood commended Black for his performance and said that his team missed a few opportunities to feed him the ball due to over-dribbling. Illinois finished the game with only 12 assists and shot just 40.7 percent from the field and 21.1 percent from behind the arc.

The Illini have lost six straight games against the Hoosiers at Bloomington Assembly Hall. Michael Finke didn’t make the trip and missed his second consecutive game with a concussion. Da’Monte Williams traveled with the team, but didn’t suit up because of an undisclosed leg injury. Both players will have a few days to recover before Illinois faces Nebraska.

Underwood believes the Illini showed a lot of resiliency in their 10-point loss to the Hoosiers, and hopes that their second-half energy carries over into their matchup with the Cornhuskers.

“If we play this way on Sunday in front our home fans, they’re going to enjoy watching it,” Underwood said. “I liked a lot of the things we did. Tonight was a night of growth.”