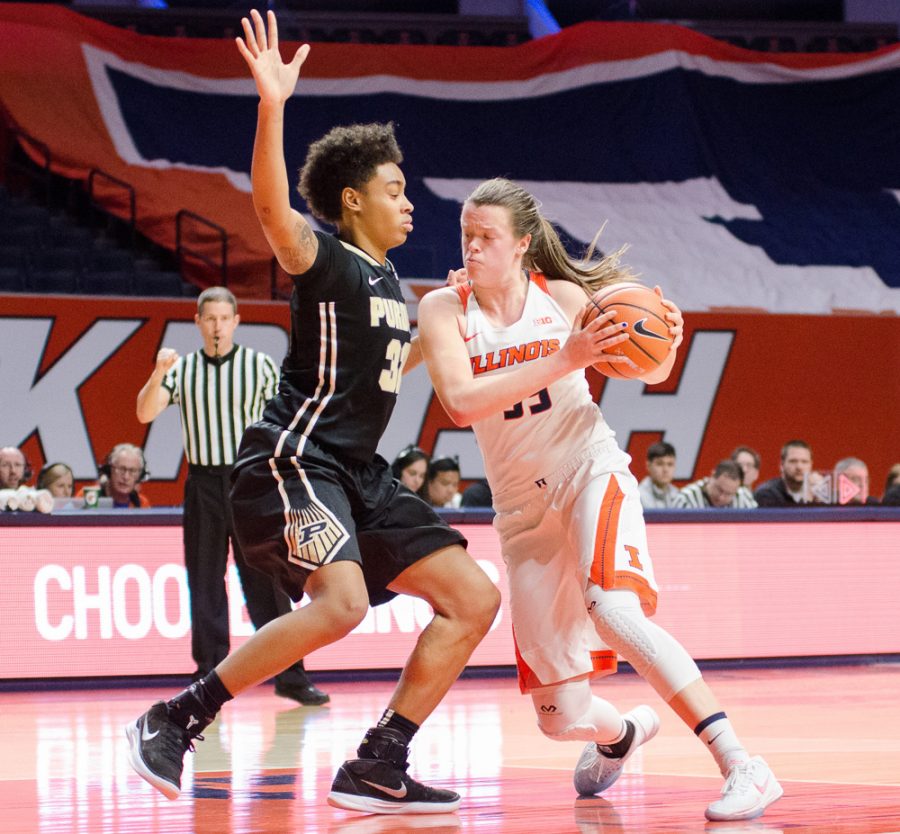 Alex Wittinger drives the lane during Illinois’ 73-54 loss to Purdue on Sunday, February 4.

While many would have expected the No. 16 Buckeyes to run away from the Illini early, Illinois hung around. Ohio State held just a 38-33 lead heading into the halftime break.

The junior forward would register 30 points to go along with 16 rebounds, including 11 offensive rebounds.

Wittinger felt she played well, and was determined to do her part on the glass.

“I deliberately tried to focus on rebounding today, and that helped offensively,” Wittinger said.

To try and prevent Wittinger’s touches, Ohio State utilized a full-court press on the Illini, forcing 17 turnovers, and scoring 26 points off of them.

“The biggest thing is (if) we can keep (Wittinger) off the glass. She was great offensive rebounding. I thought our press was effective,” McGuff said. “We were able to disrupt Illinois and turn them over, take those turnovers (and) turn them into points.”

Coming out of the locker room, the Buckeyes (21-6, 10-3 Big Ten) seized control, rode the record-setting Mitchell (28 points and five three point shots) and her fellow senior guard Linnae Harper (20 points and 12 rebounds) to an 88-69 victory.

As the losing streak for Illinois extended to 14, head coach Nancy Fahey has been forced to try and find small positive notes to take from games, and she felt her team’s defensive strategy was effective in limiting Ohio State in the first half.

“The defensive philosophy in the first half was solid. We call it a bubble, where you just keep trying to bounce them out (of the paint),” Fahey said. “We understood they were gonna hit some shots eventually, but I thought we had a pretty solid plan.”

Although Illini fans may be tired of hearing the same sort of speech from opposing coaches believing in Fahey’s future plans, McGuff echoed the same type of sentiments offered by Wisconsin coach Jonathan Tsipis and Purdue coach Sharon Versyp.

“Nancy’s doing a good job. They look organized,” McGuff said. “They’re playing hard. It’s not easy to always get your team to show up and play hard and that’s where I give her a lot of credit.”