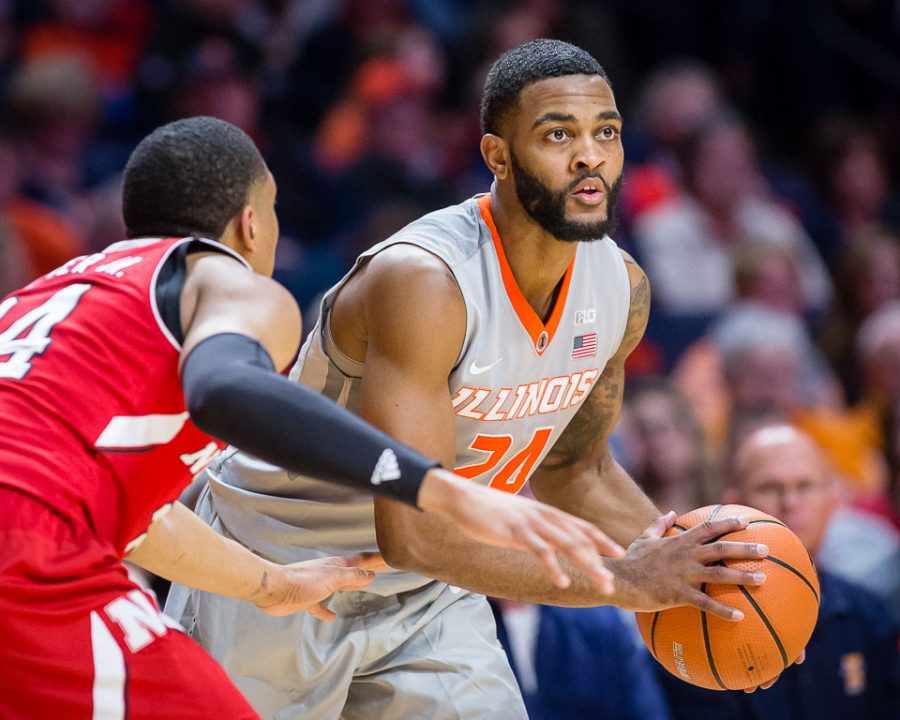 Illinois guard Mark Alstork (24) looks to pass the ball during the game against Nebraska at the State Farm Center on Sunday, Feb. 18, 2018.

Three-point shooting has been a big focus for the Illini this season, and in Sunday’s matchup with Nebraska, it paid off. While scoring droughts have plagued the Illini all season, the shooting against the Huskers was absolutely lights-out. In the first half alone, Illinois shot just over 62 percent from the floor, including nearly 78 percent from beyond the arc.

While you certainly can’t expect them to shoot at that level every night, it was a nice change of pace to see shots falling and an efficient offense.

But that was not able to carry over to the second, as the Illini opened up, scoring just four points in the first nine minutes. Leron Black eventually stopped the drought, but nonetheless, the efficiency took a big dip in the second. All in all, they finished strongly enough to shoot just over 43 percent from the floor, leading to a 72-66 Illinois victory.

The big story all season, aside from the overall struggles, has been the emergence of Trent Frazier. Now, don’t get me wrong, Frazier has been phenomenal all season, and he had another solid game against the Huskers, but this game was dominated by the power forward duo of Leron Black and Kipper Nichols.

The combo of Black and Nichols went for a total of 40 points on the night, allowing the offense to open up for a nice inside-out combo that led to multiple threes for Black, Nichols and the rest of the sharpshooters.

It’s important to recognize how dominant these guys can be on nights like this, considering Black is still coming back for another year and Nichols should be back for two more. They alone, along with Frazier, form a very strong 1-2-3 punch for next season. Add in complementary guys like Mark Smith, who will certainly progress in his sophomore season, Da’Monte Williams and five-star guard Ayo Dosunmu, and the pieces are there.

One of the biggest complaints is the lack of bigs who can compete at a Big Ten level, and while Nichols and Black aren’t the size of guys like Isaac Haas or other Big Ten big men, they are two very solid pieces. Both provide stable scoring options and the size to battle with the majority of the guys that Illinois will face in the post.

Frazier’s been the hero for most of the season, but for Sunday’s game with Nebraska, it was all about Black. I mentioned his play with Nichols earlier, but not enough can be said about how good Black was on Sunday. He finished with 28 points and seven rebounds, but even all of that doesn’t explain how well Black played on Sunday.

Beyond the stats, Black’s superb play does a few things for the Illini. First off, it frees up the other shooters and allows them to spread the floor. For a heavy portion of the second half, Black drew double teams nearly every time he touched the ball, leading to open threes for guys like Frazier and Mark Smith. Aside from opening up for others, it also helps to generate more shots of his own from beyond the arc.

Aside from the straight-up scoring ability that Black possesses, he can create havoc for opposing teams even when he doesn’t have the ball. In games like Sunday’s, where Black shot the three-ball at a high percentage, they almost require a ball-denial approach from opposing defenses. Anywhere from the free throw line and within is basically a layup for Black, so stretching his range beyond the arc goes a long way for head coach Brad Underwood and the rest of the offense as well. Combine all of that with his prowess on the glass, and you can see just why I’d undoubtedly name him the MVP of this Illini team.

Illinois was favored by one point in this game, and honestly, it came down to just about that. Heading into this one, I never would have imagined that the Illini would be within a couple of points in the odds department, but here we are, and Vegas was right again.

The Illini carried a three-point lead into the final minute, before free throws and stops ultimately propelled the Illini to a six-point victory. How the handicappers knew it? I don’t know. Maybe they’re all wizards or something. But one thing’s for sure: they got it right again.

Up next: Michigan State

This was a nice win, but the next one does not get any easier. A trip to Michigan State to play the No. 2 Spartans is never fun, and even coming off of this win, the next game does not look great for the Illini. Black and Frazier will play huge roles again, so a lot of it may come down to how they play, but stopping the lottery-pick duo of Miles Bridges and Jaren Jackson does not seem probable.