Illinois tennis takes down No. 15 Duke, No. 11 Florida at ITA Championships 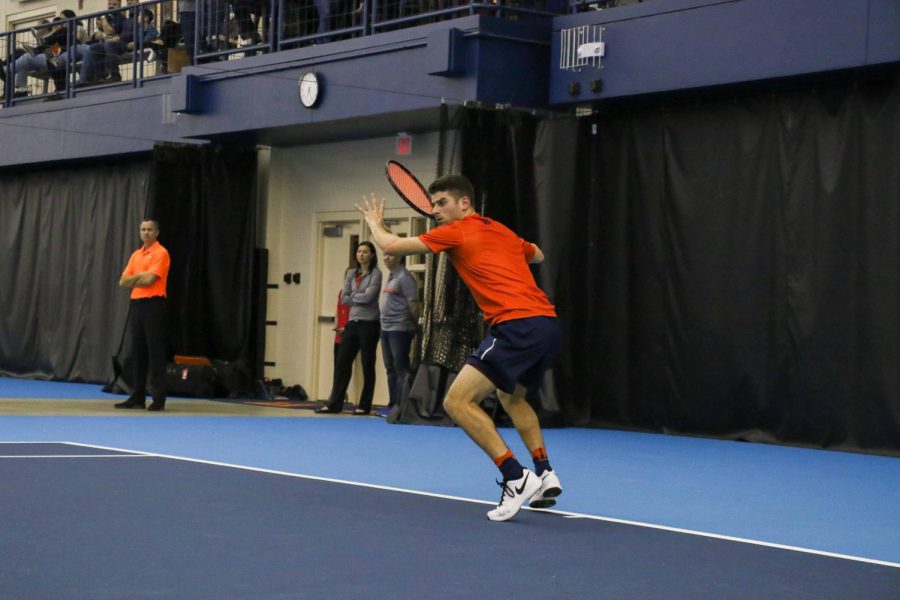 Illinois' Aron Hiltzik prepares to strike back the ball in the meet against University of Kentucky on Feb. 24, 2017 at the Atkins Tennis Center in Urbana.

The No. 10-ranked Illinois men’s tennis team found itself in a familiar situation on Saturday at the ITA Championships in Seattle, Washington.

The Illini had dropped their opener on Friday against No. 7 UCLA, having struggled to establish momentum early and losing the doubles point before ultimately falling 2-4.

Illinois head coach Brad Dancer was disappointed with the result and put the blame on himself.

“UCLA played better than us today. Watching the match unfold, I knew there were a few things we could do to prepare better,” Dancer said in a press release. “Our guys always play hard, but we just have to execute better and this is on the coaching staff. We have to make sure that we are covering everything when we prepare.”

The freshman doubles pair of Alex Brown and Caleb Chakravarthi was unable to get the job done against Duke’s Ryan Dickerson and Jason Lapidus, losing 6-2, and sophomores Zeke Clark and Aleks Kovacevic followed suit, losing 7-5 to Duke’s Nicolas Alvarez and Catalin Mateas.

No. 40-ranked Aron Hiltzik and Aleks Vukic were at 6-6 (1-5) in their matchup when the doubles point was decided.

It looked as if the team was mirroring the start from its UCLA loss.

But then, Illinois responded.

Kovacevic gave the Illini a commanding 3-1 lead after his 6-1, 6-2 win over Dickerson, and Clark clinched the win for Illinois at No. 4 singles, winning 6-3, 6-4 over Sean Sculley.

Dancer was pleased with his team’s response after going down early in doubles.

“We didn’t prepare for doubles the way we need to and it showed today,” Dancer said in a press release. “This is a good rebound win. As I’ve said all year so far, we are capable of more.”

The win over Duke was Illinois’ fifth win over ranked opposition this season. Except for the season-opening 4-0 win against unranked Georgia Tech on Jan. 27., the Illini have faced only ranked opponents to date.

Dancer attributed the victory to the team’s determined mindset.

“Resilient effort by our guys today. We’ve been fortunate enough to play Duke twice now, not at full strength,” Dancer said in a press release. “They have great players, so it’s a challenge. Having said that, yesterday’s loss took some of our soul. In some ways, I don’t mind that, because it means our team came to Seattle to win.”

The Duke win also secured a matchup with No. 11 Florida in the third and final fixture of the ITA Championships on Sunday.

Illinois came out much stronger against the Gators than in either of the weekend’s previous outings.

This time around, the team was able to capture the doubles point.

Illinois quickly rattled off three wins in singles to clinch a 4-0 win over the Gators. Khlif won again, earning his second dual match win of the year, blanking Chase Perez-Blanco, 6-0.

Kovacevic did the same, shutting out Andrade 6-0, and Vukic closed it out with a 6-2 win against Perez.

The two wins against Duke and Florida gave Illinois two top-15 victories on the season and brought the team’s record to 6-3.

The Illini hit the road again next weekend as the team is set to travel to Lexington, Kentucky, to take on Kentucky, who lost to Duke 4-1 on Feb. 11.