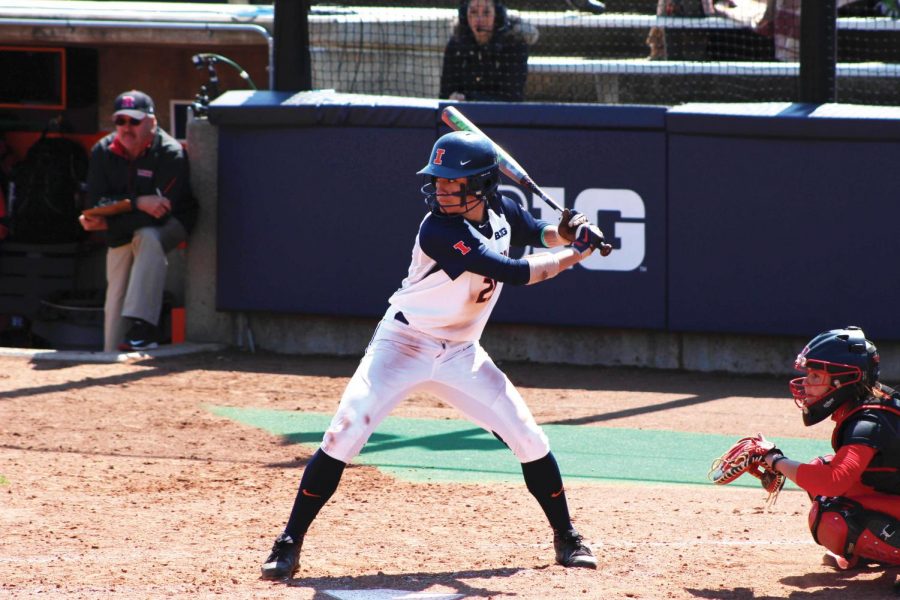 Illinois' Carly Thomas bats in the game against Rutgers at Eichelberger Field on Sunday, Apr. 3, 2016.

Illinois softball came out of its weekend trip to Chapel Hill, North Carolina, 2-2, splitting its games with North Carolina and Pittsburgh.

The Illini got off to a winning start against the Panthers on Friday, prevailing 5-4 in nine innings.

Pittsburgh started off up 1-0 after a first-inning home run, but junior Carly Thomas answered with Illinois’ first home run of the season in the bottom of the first.

The teams traded runs throughout the game, but Pitt held a 4-3 lead going into the bottom of the seventh inning. With two outs, junior infielder Alexis Carrillo homered to deep center field, tying the game and forcing extra innings.

The game remained knotted at five until a Pittsburgh throwing error gave freshman pinch runner Rhein Trochim an opportunity to score from third, giving the Illini a 5-4 win.

Head coach Tyra Perry was impressed with Carrillo’s performance on a weekend that was filled with inconsistencies for the team.

“(Carrillo) came through with several clutch hits throughout the weekend and has been playing with that energy and effort we’ve been talking about and what we’re looking for from all of our players,” Perry said. “As she continues to work and develop her game and her skill, I believe she will continue to come through for us.”

The second game of the day, against North Carolina, went poorly for Illinois.

North Carolina won 6-2 after a four-run fifth inning allowed the Tar Heels to take a commanding lead. Edwards, who started for Illinois, took the loss after pitching 4 1/3 innings. Senior Erin Walker made her season debut, pitching 2/3 of an inning, while Danielle Brochu closed, allowing only a single walk and no hits in 1 1/3 innings.

Illinois rebounded on Saturday with a 5-2 victory over North Carolina.

Oestreich moved to 2-2 on the season, giving up two earned runs in six innings. Edwards entered in the seventh inning to close out the Illini win.

Perry was glad Oestreich gave the team a strong presence at pitcher.

“Oestreich has shown a level of consistency that we need,” Perry said. “She’s still working on a few things, she’s pretty new to the Division I game, but she’s really working together with coach McMahon and she’s shown a lot of promise on the mound.”

Carrillo went three for four at the plate and designated hitter Rowan McGuire drove in two runs on the day.

On Sunday, Illinois was routed 9-0 by Pittsburgh.

The loss moves the Illini’s record to 3-6 on the season, but the team will have until March 2 to shore up its weaknesses ahead of the Coach B Classic at Southern Illinois.

Perry is going to stress the importance of playing with maximum effort and maintaining confidence at the plate in clutch situations throughout practice over the next week. She noted the team has not consistently met the levels needed to succeed in those areas.

“Pitchers, when they get a ground ball or fly ball, we need to make sure that we’re giving every single ounce of ourselves to make a play on the ball, and I don’t feel like we’re doing that consistently,” Perry said. “We’re going to talk a lot about that. We’re also not coming up with the hits that we need in clutch, RBI situations consistently.”

Normally when the team has a layover between a series of games, there will often be a couple of days off to recover mentally and physically. But with the weekend’s results, Perry wants to devote enough time to correcting her team’s mistakes and shortcomings.

“There was an opportunity to take multiple days off had we continued to play well,” Perry said. “In light of today’s game and some of our inconsistencies, we’re going to use that time to work to get better and solidify our defense and offense.”