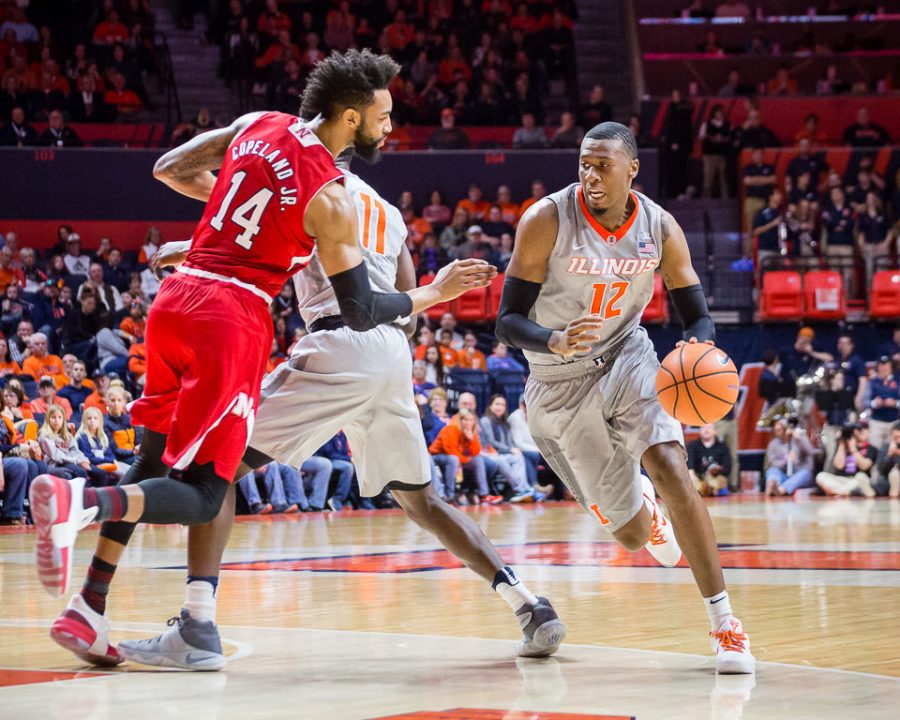 Illinois forward Leron Black dribbles to the basket during the game against Nebraska at the State Farm Center on Sunday, Feb. 18.

On the court, Leron Black has no problem talking. His deep, raspy voice can be heard barking out Illinois’ tasks on both sides of the ball.

But when he’s not on that 94-by-50 foot stretch of hardwood, he usually doesn’t have much to say. Black has only met with the media a handful of times this year and keeps his statements brief. He gives all the credit to his teammates and coaches, even when he’s asked about himself.

It’s not that he is afraid of the attention, he simply doesn’t care about it. He lets his game speak for itself, and this season, it has been far from quiet.

“He’s had an unbelievable year,” said head coach Brad Underwood. “He’s been really good. (But) like I said, I always want more from him. I always expect more from really good players.”

Black stands at just 6-foot-7, but despite being undersized at power forward, he has emerged as Illinois’ most consistent player. He doesn’t play above the rim or blow past many defenders, but his offensive arsenal is just as effective.

He knocks down open looks, throws jump hooks over both shoulders and uses his trademark fadeaway to get shots off over taller defenders.

Over the past three games, Black is averaging 22.7 points, including a career-high 28 points on Sunday. Against Nebraska, he made 11 of 18 field goals attempts and at one point netted seven consecutive shots. His full repertoire was on display, yet he didn’t have anything special to say after his big performance.

“Just feeling the same as I always do,” Black said.

Even though Black won’t talk about it, Underwood commended his power forward for expanding his game. Originally, he pictured Black as a player who would pound the glass and occasionally score around the rim.

But after seeing how polished Black’s offensive game is, Underwood thinks the next step is getting to the free throw line.

“You start getting him to the line, six, eight, 10 times a game,” Underwood said. “Now you have a guy everyone has to fear because of fouls.”

In the team’s most recent outing against Michigan State, Black made seven of eight shots from the charity stripe. He leads the team in both attempts and makes this season and is shooting 80.2 percent, ranked 12th in the Big Ten.

Illinois has two games left before it closes out the regular season and prepares for the Big Ten Tournament. The Illini have had their moments of triumph and failure this year, but through it all, Black has remained steady.

Underwood knows other teams will continue to key in on Black, but he’s confident the junior will adjust when necessary, just like he has all season long.

“When you dive into a scout and you see how people are playing us,” Underwood said. “How he’s getting his points, it’s pretty impressive.”