Illini’s best not enough for No. 9 Boilermakers 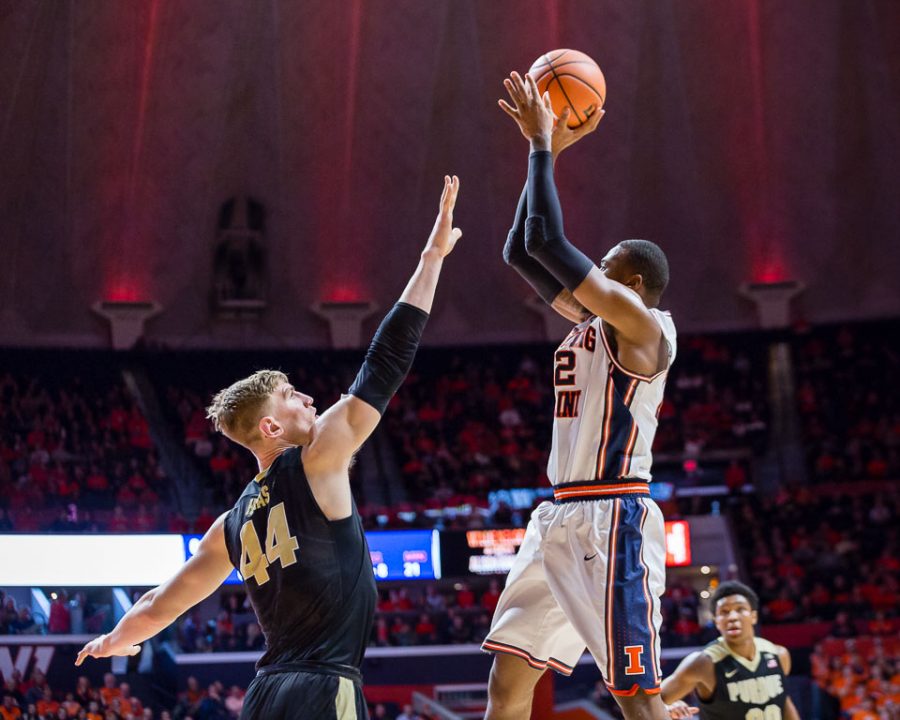 Illinois forward Leron Black (12) rises up for a shot during the game against Purdue at the State Farm Center on Thursday, Feb. 22, 2018.

“Good college basketball game,” is how head coach Brad Underwood opened up Thursday’s presser, and that’s exactly what it was: a good basketball game. Despite the loss, the Illini played one of their most complete games all season, and thanks to huge games from Trent Frazier and Leron Black, had a shot at beating the No. 9 team in the country.

But, despite the great game from the Illini, Carsen Edwards played what might have been his best college basketball game ever, dropping 40 points in a winning effort on the road.

Underwood went on to talk about how his team has gotten better all season, and it is truly impressive how far they’ve come. But, let’s take a deeper look into tonight’s game and check out some of the biggest takeaways I had.

Black has played great basketball all year, but over the past few games, we’ve seen him elevate to another level. Black has averaged 15 points per game this season, while chipping in five rebounds and nearly an assist per game as well. But, over the past few, he has gone beyond that.

Against Purdue, Black stepped up again in what may have been his toughest test of the year, going up against the likes of Isaac Haas and Matt Haarms — who are both well over seven feet tall. But, the size didn’t bother Black, as the big forward went for a cool 28 points, while still grabbing three boards on the night.

This all goes to show just how good Black really is, and that with more talent around him next year — a la Ayo Dosunmu and whoever else joins the team in Champaign — he could be a legitimate threat for Big Ten Player of the Year next season. His numbers should only improve, and he’s already shown he’s one of the most efficient and effective scorers in the Big Ten — if not the country. Head coach Brad Underwood said before the season that he was an All Big Ten Team type of guy, and Black has done well on fulfilling that prediction this year.

Frazier has been the man all season, and against Purdue, he was again. Frazier had 20 points, and six assists, while running the offense the majority of the game. Frazier had one of his patented hot streaks, going for all of his 20 points in the second half and even pushing them to an Illini lead. But, despite another big game, he was not the only guard to shine on the night.

Da’Monte Williams had one of the best games of his young career, scoring 11 points, while dishing out two assists and adding four rebounds. Williams has been a bit of a “do-it-all” guy all season, but he only reiterated that wide skillset against the Boilermakers. Barring a brief stint in the locker room after re-aggravating his knee, Williams very well might have played the last ten minutes straight, after locking in tight on both ends.

Mark Smith also sneakily had a really nice game. After being the target of plenty of criticism because of his slow play in the Big Ten, he is starting to look like the guy that was making fabulous finishes and playing great basketball in the beginning of the season. While it isn’t necessarily showing up in the stat sheet, the confidence is there and it’s going to be exciting to see his development heading into next year.

Not to mention, Te’Jon Lucas also had a really good night. He hit multiple three-pointers, leading to 12 points while racking up six boards and five assists on the night as well. That right there is four guards who all played very strongly and on the same page — something we have not seen much this season. If they can keep this up next season with the addition of Dosunmu, this group has the potential to be scary good.

Stars shine brightest in Champaign (and just against Illinois in general)

We’ve seen it all year, but opposing teams’ stars continue to rise to the occasion night in and night out against the Illini. Thursday against the Boilermakers, it was Carsen Edwards, who went for 40 points, five rebounds and three assists, ultimately leading the Boilermakers to victory. We saw Miles Bridges, Jaren Jackson, Jawun Morgan, and plenty of other Big Ten stars have career nights against the Illini, and Thursday was no different.

Some of this comes with the lack of size, but there’s definitely times where the team needs to make the necessary adjustments to keep these guys in check. Edwards was the difference in Thursday’s game, and if there was just a bit more contain, this could have been a very different result.

It blows my mind week in and week out how good these guys are at what they do. On Illini Drive none of us thought this would be a good game, considering the immense size advantage for Purdue and what we thought would be a Finke-less Illini team, but Underwood and co. showed up. Frazier showed up, black showed up, and just like that the whole team got going and kept the team in the whole game.

Had I been handicapping this game, I would have had Purdue as at least 15-point favorites, but after a last-second three by Frazier, they got it right again and the Illini covered that spread.

I still don’t know how they do it, but Vegas continues to amaze.

This is it, the final game of the season. Illinois closed it out at home with the Purdue loss, and following that they will finish out the regular season on the road at Rutgers. After a dominant win last time the two squared off, the Scarlet Knights will be looking for revenge in Piscataway, NJ, and the Illini have a shaky history closing out the season there.

If the Illini play like they did against Purdue, it will be a layup, but that is a big if and will require a great performance on the road for the first time all year.