Illini looking to the future on Senior day 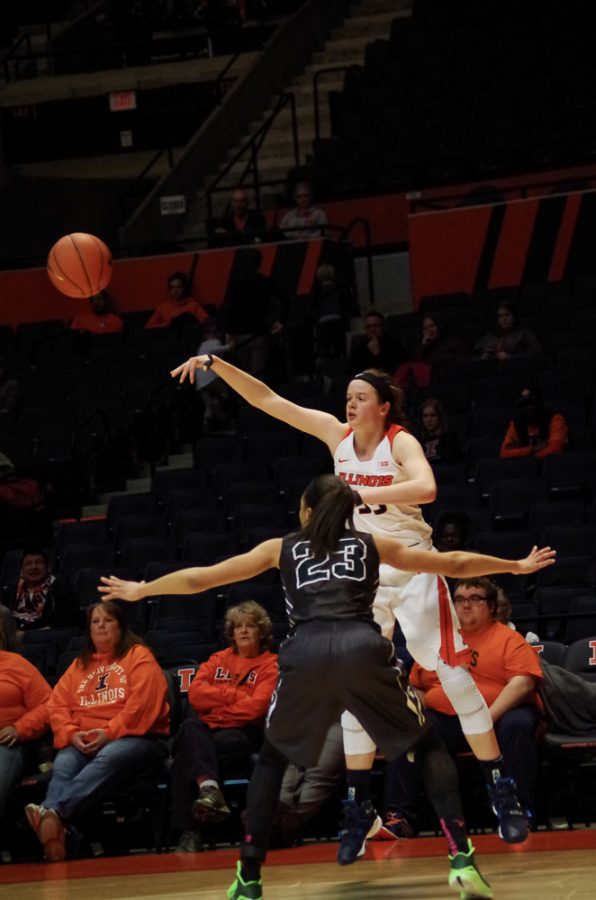 Illinois’ Alex Wittinger (35) jumps above her opponent to pass the ball to her teamate at the game against Michigan State on Wednesday, Feb. 24th, 2016. The Illini lost 43-71.

While the season has probably not quite gone the way Alex Wittinger thought it would in the win-loss column, the Illinois junior forward has had a breakout year, averaging 14 points and 9 rebounds.

A few individual performances that stand out are her 18 point, 11 block, 10 rebound triple-double on Jan. 23 at Penn State, and her 30 point, 16 rebound performance against Ohio State (and Big Ten record setter Kelsey Mitchell).

Rather than rely on self-motivation, Wittinger puts her faith in another source to stay confident, even though her team has not had the success she envisioned at the start of the year.

“If I would put my faith in myself, that’s not gonna work, because I am a person, I make mistakes. I change from game to game so things aren’t gonna go as planned sometimes,” Wittinger said. “I really try to play for God. He’s consistent and I know that if I’m doing my best, he’s pleased with me, and that keeps me in the mindset of not getting down.”

With the Illini’s postseason aspirations all but gone, Wittinger believes that if the team continues to follow Nancy Fahey’s plan, they will improve next season.

“As long as we continue to get behind what coach Fahey’s trying to teach us we’re gonna keep improving,” Wittinger said. “She’s knows what she’s doing, she (has) such winning experience.”

As far as this season goes, the Illini will have one final chance to earn a conference win before the Big Ten tournament when they welcome Minnesota to the State Farm Center on Sunday.

The Golden Gophers, who are currently projected by ESPN’s Charlie Crème to be a 10-seed in the NCAA tournament, will be hoping to avoid a slip-up, as a loss to the Illini would certainly send them closer to the bubble.

For Wittinger, a native of Delano, Minnesota, the game represents not only another opportunity to get a victory, but a chance to compete against her home-state school.

“I always enjoy paying Minnesota,” Wittinger said. “I do really enjoy playing there (at Minnesota) because that’s where I grew up – it is special.”

While many Illini fans may be looking ahead to next season, when Wittinger will be joined by nationally-touted incoming-freshman Mckenzie Blazek and Arieal Scott, Sunday will be the last game in Champaign for seniors Kennedy Cattenhead and Ali Ball.

In a season where she has been in and out of the starting lineup, Cattenhead has remained positiv and appreciates everything she has learned during her time at Illinois.

“It’s a lot of different emotions. Its been fun, exciting, tough,” Cattenhead said. “All in all, those emotions have taught me to be a better person on and off the court.”

When the final buzzer sounds Sunday, and Cattenhead and Ball are treated to “Hail to the Orange” one last time, the memories that will stick with her go far beyond the basketball court.

“The thing I’ll remember most is the family atmosphere,” Cattenhead said. “We’re around each other all the time so those moments on and off the court are super special to me.”