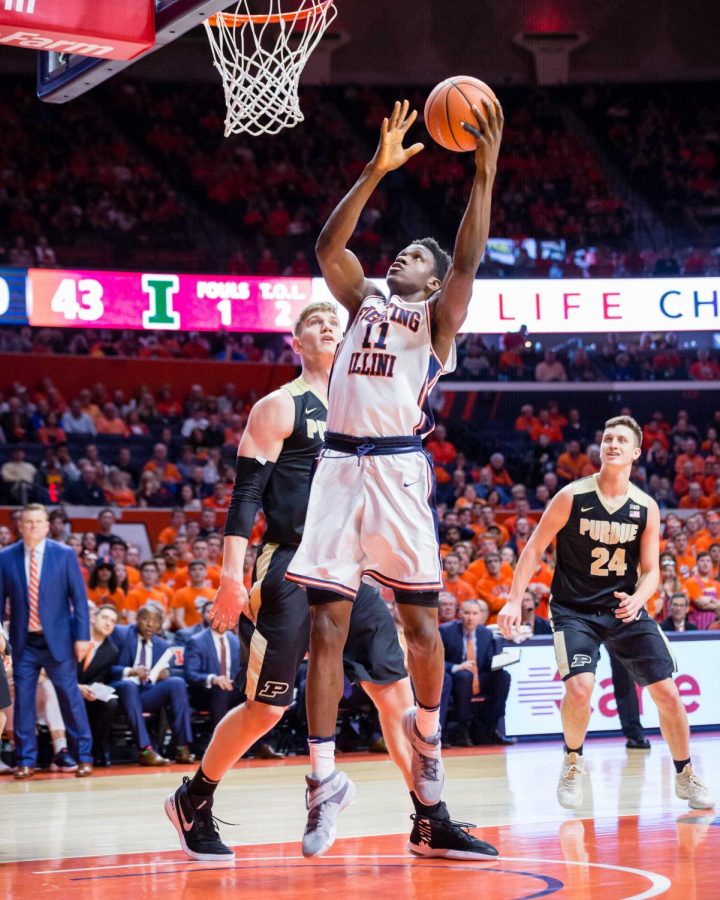 Illinois forward Greg Eboigbodin (11) puts up a layup during the game against Purdue at the State Farm Center on Thursday, Feb. 22, 2018. The Illini lost 93-86.

Trailing 37-28 in the midst of a 14-6 run by Purdue, Illinois needed a basket from anyone to stop the bleeding.

On the Illini’s next possession, Greg Eboigbodin caught the ball in the post, turned and missed a point-blank layup at the rim. Head coach Brad Underwood threw his hands up in the air as if to say, “What more can you ask for?”

A few plays later, Underwood called a timeout and subbed Eboigbodin out of the game.

The missed layup was obviously frustrating, but it was also an example of just how far Eboigbodin has to go.

“We’re trying to get him to have confidence,” Underwood said. “He’s very, very good and comfortable in practice. Now, we get in games, and he sees legit size, and it’s a little different for him. It’s a learning experience.”

Eboigbodin already has many attributes that can’t be taught. Standing at 6-foot-9 and with a 7-foot-3 wingspan, he is clearly the Illini’s most athletic big man. While it hasn’t translated as fluidly on the offensive end, Eboigbodin’s athleticism is hard to ignore on defense. He’s shown he can rotate when one of his teammates gets beat off the dribble, rebound the ball and erase shots at the rim.

But perhaps the strongest part of Eboigbodin’s game is his ability to run the floor. He doesn’t show much fatigue throughout games because for most of his life, his stamina was built up playing soccer.

“Soccer is just the best sport ever,” Eboigbodin said. “I’m sorry, I know I play basketball, but I don’t think I’ll ever quit playing soccer. I grew up playing it right from scratch. If you go to Africa, you see kids kicking bottle caps without shoes. Even oranges, they don’t even have to peel it. It’s just fun.”

It wasn’t until Eboigbodin moved to the United States from Nigeria in 2013 that people started pushing him to trade in the grass for the hardwood. Eboigbodin said he was 6-foot-1 as an eighth grader and grew an additional 6 inches that year. He won’t admit that he became too tall for soccer, but he did acknowledge that a basketball career seemed more realistic.

The following year, Eboigbodin enrolled at University of Detroit Jesuit High School and began playing for legendary head coach Pat Donnelly. Donnelly helped Eboigbodin develop his game, and by the time he became an upperclassman, Eboigbodin was an integral part of the team.

During his junior campaign, the Cubs went a perfect 28-0 to win the 2016 Michigan Class A state title. In his final season, Eboigbodin averaged 13.8 points, 13.4 rebounds and 1.5 blocks to lead his team to a 20-4 record before losing in the state quarterfinals.

It wasn’t the ending Eboigbodin wanted, but when it came time make his college decision, he believes it was an easy one.

“I actually went out when I was being recruited with Leron (Black), Mark Smith, Da’Monte (Williams),” Eboigbodin said. “I looked those guys up, and Mark Smith was Mr. Basketball. I said, ‘Oh, I can play with Mr. Basketball.’”

But despite meeting those would-be teammates first, it was Trent Frazier who would eventually become Eboigbodin’s roommate.

Frazier said he enjoys sharing a room with Eboigbodin and added that the two have learned a lot from each other.

“He has really good character,” Frazier said. “He’s still learning the game, but he’s really fun to be around. I love him. He’s like my big brother, so he’s a really good mentor to me.”

While Eboigbodin is still trying to figure things out on the court, he’s shown flashes of what type of player he could potentially be. In limited action this season, he has scored eight or more points four times and has recorded four games with at least five rebounds.

He’s also started in two games, replacing Michael Finke who missed four games with a concussion. Eboigbodin said he came to Illinois to learn from players like Black and Finke, not replace them. But given the circumstances, he was still grateful to fill in.

“I would say it’s a dream come true,” Eboigbodin said. “I never thought I was going to start my freshman year, any games. But as soon as coach (Undwerood) said I was going to, I just took up the challenge. I’m not where I want to be yet. But I just learn from it every day moving forward.”