Bennett Williams ready to step into bigger role for Illinois 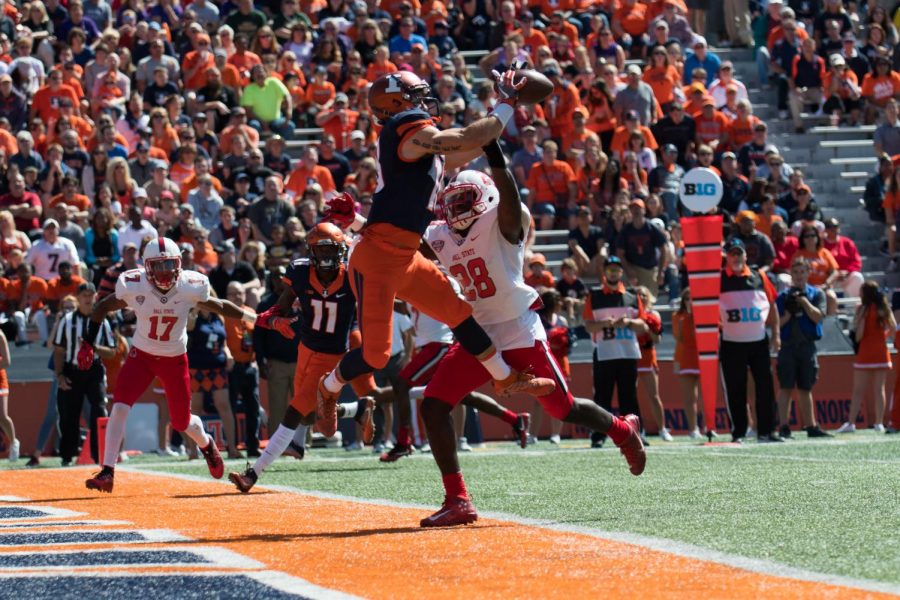 Illinois wide receiver Mike Dudek catches a touchdown pass during the game against Ball State on Sept. 2 at Memorial Stadium. Dudek is getting ready for his senior season.

Bennett Williams came into his freshman season at Illinois without too much fanfare, but he quickly established himself as a presence in the secondary, starting seven games and appearing in 11.

He led the team with three interceptions, ranked second in the Big Ten in tackles for freshmen (64) and was the first true freshman to start at safety in a season opener since 1980.

Williams knows the expectations are higher this year.

“Last year when I came in, not a lot of people knew who I was,” Williams said. “Now I have some accolades, a little bit of (publicity), but nothing changes for me. I’m just going to do the same thing; I’m going to work hard this year. Expectations are going to be raised, but I’m not living up to anyone else’s, I’m living up to mine.”

He’s confident he can do just that, now having a full offseason in the program under his belt. With his freshman year, spring practices and eventually summer camp, the Campbell, California, native feels he’s making significant strides with his game.

Last season, the Illini went 2-10, not winning a game in the Big Ten Conference. Williams said the team needs to bring consistent energy and not cut any corners this season.

After wide receiver Mike Dudek played his first snaps of college football in 981 days, scoring on a 16-yard touchdown against Ball State, he went on to catch 24 passes for 262 yards the remainder of the season.

The year was cut short by injury struggles — something Dudek is familiar with, having dealt with two ACL surgeries that caused him to miss the 2015 and 2016 seasons. He appeared in seven contests, starting six. He also returned punts for the Illini, averaging 10.8 yards per return.

“Last year, I was almost there, but I wasn’t fully there,” Dudek said. “I think just the mental aspect, then the soreness, building up on me.”

With Dudek’s senior season before him, he is expected to play a large role in the Illinois receiving corps, which returns Ricky Smalling, who led the Illini with 510 receiving yards, and Louis Dorsey, a tight end who led the team with 3 touchdowns and racked up 395 yards.

Dudek said that despite most of his fellow receivers being younger, the unit can be a quality group this season.

Dudek said his dad nearly always asks him about his knee when talking on he phone. On Monday, night Dudek said he didn’t.

The two-year anniversary of Lovie Smith’s hire as head coach of Illinois was Wednesday. Smith is 5-19 in his two seasons at the helm of the program.

Despite the lack of positive results on the field, the program is going to look different than it has so far in Smith’s time.

In progress is the construction of new practice facilities, and on Monday the athletic department received a seven-figure donation for the project, which is set to be completed in 2019. Last month, Stu and Nancy Lovesick donated $5 million.

“I’m excited about what’s happened in the past, but there’s so much excitement about these next years as we move forward with our program, so many good things happening around here,” Smith said. “We had a big gift donated to our facility, just seeing the work that’s being done out there right now with the physical building.”