Thomas steps out of the shadows during offseason 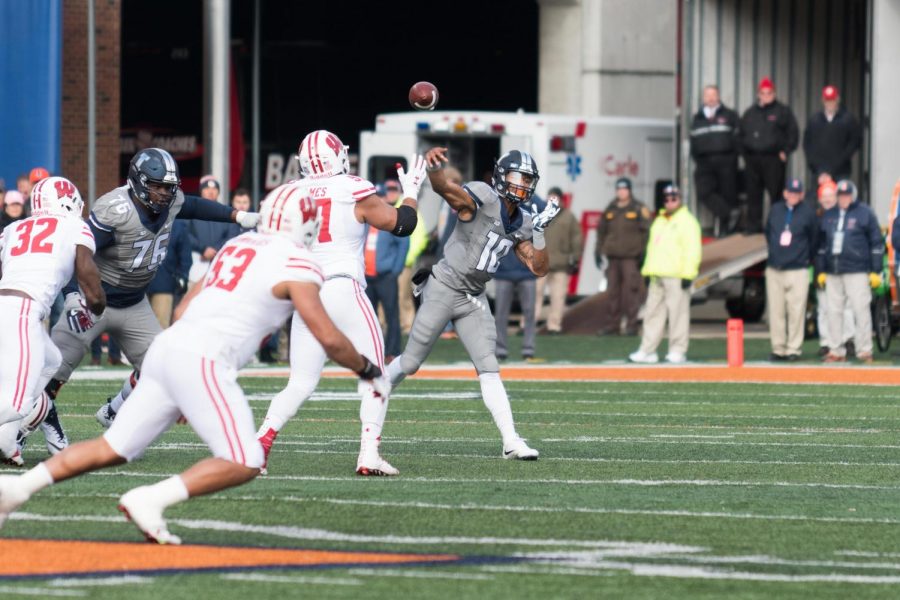 Illinois quarterback Cam Thomas throws a pass under pressure during the game against Wisconsin on Saturday, Oct 28. The Illini lost 10-24.

In the wake of several postseason transfers, there is one quarterback remaining.

The now-sophomore was mostly in the shadows behind Chayce Crouch and Jeff George, both of whom are no longer a part of the team.

Now he is tasked with the leadership role on a team that is just as young as he is.

“I’m definitely trying to lead,” Thomas said. “Stepping into a leadership role, but being a younger guy sometimes it’s hard, but everyone on the team knows I’ve got their best interest and they have my best interest.”

On top of having to fill that role, Thomas has to also get used to the new way that recently hired Rod Smith wishes to run the offense.

While Thomas doesn’t believe that learning the new offense will be too difficult, Smith’s terminology might be more of a task.

But the duo has had and will continue to have more meetings and get to know each other much better. They each expressed the importance of Thomas being more or less the sole focus of Smith during spring ball.

Smith had a similar experience at Arizona and knows just how much Thomas can gain from the focused attention.

“It’s more love,” Smith said. “You’ve got more love from coach Smith, sometimes that’s not a good thing, but he’s going to benefit from it.”

Spring football allows the team the perfect time to fall back into the swing and invites time to interpret the newness of the coach’s system.

Defensive end Tony Adams suffered a shoulder injury early in the season and didn’t quite get the feel for the game as he would have liked. The sophomore worked hard in the offseason and is excited to come back.

“It was a grind coming back out here after coming off of (an) injury,” Adams said. “I think this year (is going to) be a lot of fun.”

Along with offseason recoveries, the coaches have worked to make sure the team has become much closer, especially following the holes left by the players who are no longer on the team.

On the weekend that “Black Panther” came out, head coach Lovie Smith bought out the movie theater in Savoy for the team.

“Last season, I would say I was a little uncomfortable in the locker room,” Adams said. “Now you feel a whole lot of love (and) people actually want to play for each other, so that’s always good.”