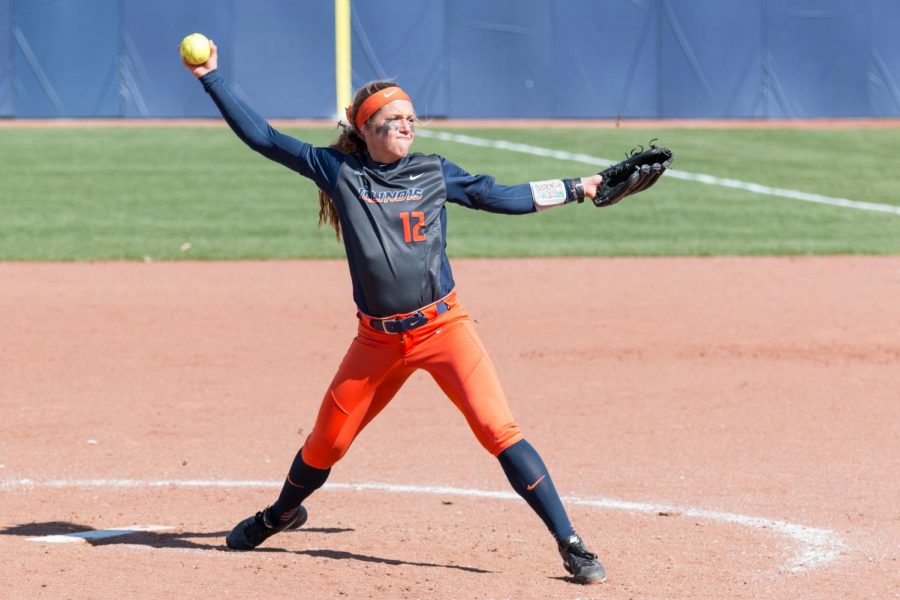 Illinois relief pitcher Taylor Edwards delivers the pitch during game two of the series against Nebraska at Eichelberger Field on April 2. The Illini lost 10-5.

After two losses to Mississippi State on Friday, Illinois came back strong with a two-game sweep of the Seahawks on Saturday and Sunday. The Illini beat the Seahawks 11-0 and 4-3, moving to 11-8 on the season.

Oestreich struck out a career-high eight batters in the win over Lowell Saturday. She is now 7-3 this season.

Despite struggling through the first two games, Oestreich said that she was able to redirect her focus for the second batch of games.

“I think I had a rough first day on Friday,” Oestreich said. “I think overall, I did a good job of bouncing back after that not-so-good performance. I kind of had the mindset of forgetting it and looking forward to the next game.”

Head coach Tyra Perry attributed her team’s success against Lowell to its production on the mound and Oestreich’s performance.

“What the entire coaching staff likes about her is that she’s very basic,” Perry said. “She isn’t too high or too low. She’s very coachable.”

On the weekend, the Illini committed eight errors over three games, all of which came during Illinois’ tournament opener against Mississippi State.

According to Perry, the Illini were in a position to win Friday, but they fell short due to errors.

“It would have been nice to have done a little better overall,” Perry said. “I do feel like in the first game, [Mississippi] State jumped out on us. And we stayed steady and kept fighting, and gave ourselves a chance to win.”

After the first game, Illinois tallied five runs with ten hits. Junior Kiana Sherlund and senior Sam Acosta each picked up two runs. Oestreich pitched the first inning but was replaced by junior Danielle Brochu in the second inning, who finished the day with three strikeouts, five hits allowed and one earned run.

The second game on Friday followed a similar narrative. Illinois found itself struggling on errors after scoring one run in the beginning of the game.

“We started out strong, scored first, but then just kind of leveled out after that in all areas,” Perry said. “I would have liked to see us fight in the second game as well. But they’re a good team; they’re well-coached and in a strong conference.”

Illinoisfell in the second contest 12-1 with junior Taylor Edwards on the mound. Edwards recorded two strikeouts and seven earned runs within three innings. She was replaced by Brochu and senior Kate Giddens.

On Saturday, Illinois turned the tides and shut out Lowell 11-0 with 14 hits. Sherlund led the Illini with three hits, followed by Thomas with two.

The Illini took down Lowell again Sunday in a close 4-3 battle, with Edwards and Oestreich at the helm once again.

Both teams scored in the first inning and remained tied up until the fourth, where Lowell took the lead 2-1. Illinois tied it up in the next inning and the game came down to the wire.

An Illinois grounder in the seventh from junior Alexis Carrillo sent Thomas across home and secured the win.