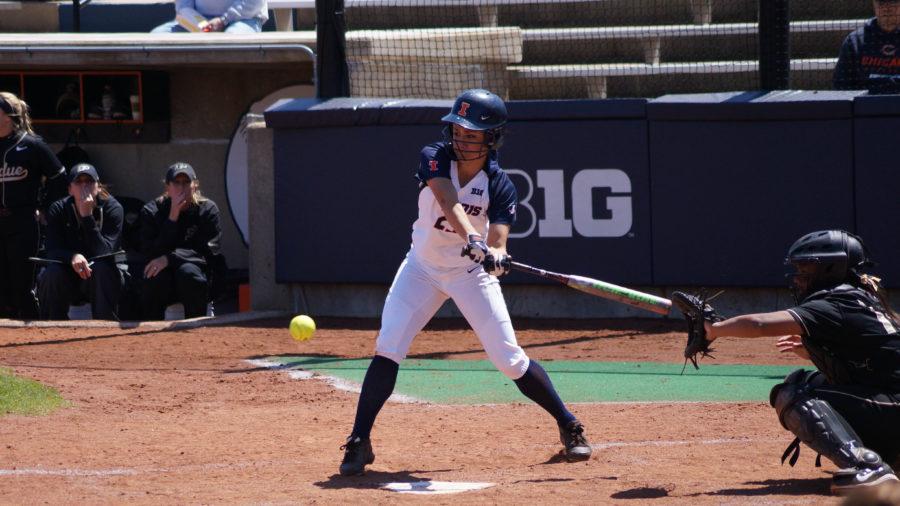 Coming off a split at the Mississippi State Tournament, Illinois is looking to continue growing its attacking mindset as the season progresses.

The Illini (11-8) are set for a doubleheader Wednesday against Mizzou at Lindenwood University. Illinois coach Tyra Perry hopes to reverse the history between the two teams, but she knows the Tigers will present the same type of challenges as Mississippi State, who swept the Illini.

“We’re 1-8 all-time against Mizzou, so I would like to beat them,” Perry said. “I believe they’ll be pretty similar to Mississippi State, so if we can come out and play hard, I believe we can do some really good things for our team.”

The similarities between the Bulldogs and the Tigers lies in the long ball. While Illinois has gone deep 15 times thus far, Mizzou has 29 home runs, even more than Mississippi State’s 21. While she wants her team to respect its opponent, Perry wants to see her team in attack mode from the first pitch.

“Steady,” Perry said. “We have to stay steady, avoid the big inning and have confidence in our game. I [also] want to see energy. Whenever we have a lot of energy, we have a good time and a great chance to win.”

The Illini will hope to carry the energy from their weekend series with Massachusetts-Lowell, where they won both games.

Junior outfielder Carly Thomas, the team leader in RBIs, also likened Mizzou to Mississippi State. However, rather than focus on one game individually, Thomas wants her team to continue learning from each game with Big Ten play on the horizon.

“We did start out a little rough, but I think that we’re learning from every single experience,” Thomas said. “We’re taking away something from every game.”

Both Thomas and her head coach stressed the value of the process, and how often the term gets brought up within the program.

Senior infielder Sam Acosta talked about the specifics of that process, which focuses on effort over results. Acosta will look to continue her recent hitting success, as she comes into Wednesday’s game riding a seven-game hitting streak.

“She (Perry) does talk a lot about the process. Everything is pretty much process-oriented,” Acosta said. “We’re not looking at the outcomes like ‘was it a hit or not?’ We’re looking at ‘were we attacking?’ and ‘did we make good contact?’”

In Mizzou (16-10, 0-3 conference), Illinois will find a team with a respectable record but currently on a three-game losing streak. The Tigers have faced three top-five teams (UCLA, Oregon, and Tennessee) but have combined to go 0-5 in those games, while being outscored 43-9.

They have also faced two other nationally ranked programs, (Oklahoma State and Arizona) yet were also unable to record a victory, going 0-3.

The Tigers are led by junior infielder Amanda Sanchez, who currently holds her team’s triple crown with seven home runs, and 23 RBIs, while batting .522.