From California, Oestreich finds her home with Illinois softball 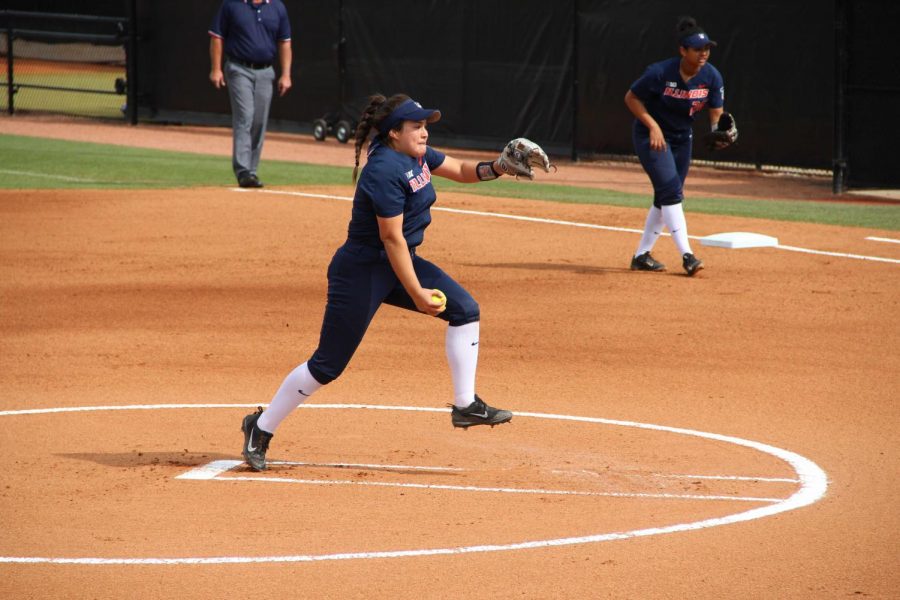 Junior Emily Oestreich pitches for Illinois. Oestreich recently moved from California and is adjusting to being on such a large campus, but she finds comfort in her new teammates.

Being “the new girl” can be scary.

But for junior pitcher Emily Oestreich, it wasn’t so bad.

Oestreich’s journey to Illinois began in at Vintage High School in Napa, California. By her senior year, she had collected two All-State honors, an MEL Pitcher of the Year title and a spot in FloSoftball’s top-100 recruiting rankings. But instead of making jump to a Division I program like some of her teammates, Oestreich opted to attend Lake Land College in Mattoon, a junior college that competes at NJCAA Division I level.

According to Oestriech, she had committed to a Division I program during high school. However, due to undisclosed reasons, she decided to play for a junior college for the first two years.

“I was originally committed to a D1 and then some stuff happened. (Lake Land) was my second option,” Oestreich said. “I did that because I knew I wanted to continue to play softball, and that (community college) has a really good record of moving people onto D1 programs.”

It wasn’t a bad second choice either. At Lake Land, Oestreich received second-team NJCAA All-American honors in 2017, and was a third-team All-American in 2016. She also finished her career as a Laker with the school records for wins, strikeouts, starts, innings pitched and shutouts.

After her outstanding performances in high school and community college, Oestreich attracted the attention of Illinois head coach Tyra Perry. According to Perry, the pitcher stood out as a product of her competition — someone the Illini needed on their pitching staff.

“She’s from California and it’s a state that has a history of a lot of strong pitchers coming out of that area,” Perry said. “We knew she had played tough competition throughout her high school and travel season, and had a good transition to ju-co and played tough teams there as well.”

Oestreich joins the Illinois softball program alongside six other pitchers on staff. That staff is packed with talented pitchers, Perry said. Oestreich’s transfer was a seamless addition to the ladies already on the mound for Illinois.

“The pitcher is involved in every single play on defense, so they set the tone for your game in some cases, but they’re definitely a big, important part of your game in all cases,” Perry said. “She’s very calm in the circle and very confident in what she’s doing.”

The game of softball is a language Oestreich is fluent in, but adjusting to an entirely new group of teammates and coaches made her nervous.

“I was definitely nervous about (being a junior), because everyone had their clicks,” Oestreich said.  “But the team did a really good job of reaching out to me before I even got here, like by following me on social media and texting me.”

After breaking the ice with her fellow players, Oestreich said she was quick to pick up friends off the field. The team lives on the same street, making it easy to make the most of their time off, she said. Some of her teammates have pets as well, which Oestreich said adds to the fun she has with her newfound friends.

On the field, her teammates have also been a guiding force in her 7-3 record on the season so far.

“I’m obviously still new and there’s a lot of stuff I’m still learning. They help explain stuff to me during practice; whatever I need help with,” Oestreich said.

While softball may seem like all fun and games, coming to a newer — and bigger school — was also a part of Oestreich’s transition.

“I was nervous for the big lectures, but I feel like they do a good job here of that,” Oestreich said. “But you still feel like you’re in a small class and you still have a relationship with your professor. I probably have the best grades I’ve ever had right now.”