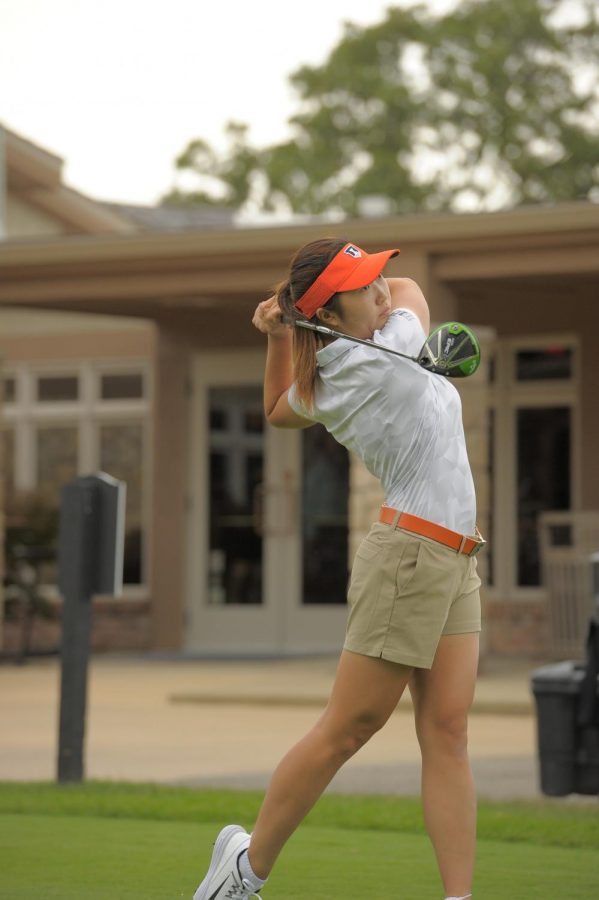 Illinois senior Grace Park takes a swing for the women’s golf team. Illinois participated in a tournament at Briar’s Creek where it placed ahead of Penn State. Park was a major factor in the team’s performance.

The Illinois women’s golf team made a strong showing in Johns Island, South Carolina, at the Briar’s Creek Invitational.

After two days of play, the Illini finished in third place out of a field of 17 teams. Illinois was outpaced by North Carolina and Campbell but finished ahead of Big Ten rival Penn State. Briar’s Creek marks the second top-five finish for the Illini this spring, following a fifth-place finish at the Meadow Club Intercollegiate.

Major contributors to Illinois’ strong finish were senior Grace Park and sophomore Tristyn Nowlin. Both Nowlin and Park carded rounds under par during the tournament, including back-to-back rounds at 1-under for Park on Monday and a final round of 4-under for Nowlin on Tuesday. The two Illini finished 1-under at Briar’s Creek with a three-round total of 215.

“My focus was definitely on and around the greens, so chipping and putting in general,” Park said. “Just knowing where I want to place each of my shots I think was really important. Placement was definitely key at this course.”

Also playing an important role in Illinois’ success at Briar’s Creek was senior Dana Gattone. After starting the tournament with two rounds of even par on Monday, Gattone finished at 2-over-par after carding a 74 during Tuesday’s third round.

The tournament this week was not without its setbacks for the Illini — an early morning rain delay on Tuesday kept players off the course for about an hour at the start of the day  — but according to Gattone, prior knowledge of the course and its frequent inclement weather came in handy.

“At Briar’s Creek, I’d say you always have to think about the weather conditions,” Gattone said. “Notoriously, we’ve gotten a lot of rain at that tournament, so when we come in we always think about how there might be some storms or some weather delays, so that makes it a little bit different. Also, the green speed makes it pretty challenging; those greens are the fastest that we play all year so getting used to that is pretty challenging, but once you get used to it you can make a lot of birdies, and I think we took advantage of that this year.”

Rounding out the Illini’s score were junior Bing Singhsumalee and freshman Ali Morallos, who finished 3-over-par and 21-over-par, respectively.

Singhsumalee recovered from a first-round 75 (2-over-par) with a 1-under-par second round. A third round score of 73 was good enough for a T-20 finish for Singhsumalee — making her one of four Illini to finish in the top 20 as individuals.

Up next for Illinois is the Mountain View Collegiate in Tucson, Arizona, and Singhsumalee is prepared.

“(My goals are to) play consistently and kind of just have a positive attitude on the golf course,” Singhsumalee said. “And play as low as I can go and go in with no expectations.”