Illini squeeze past Northwestern in extras 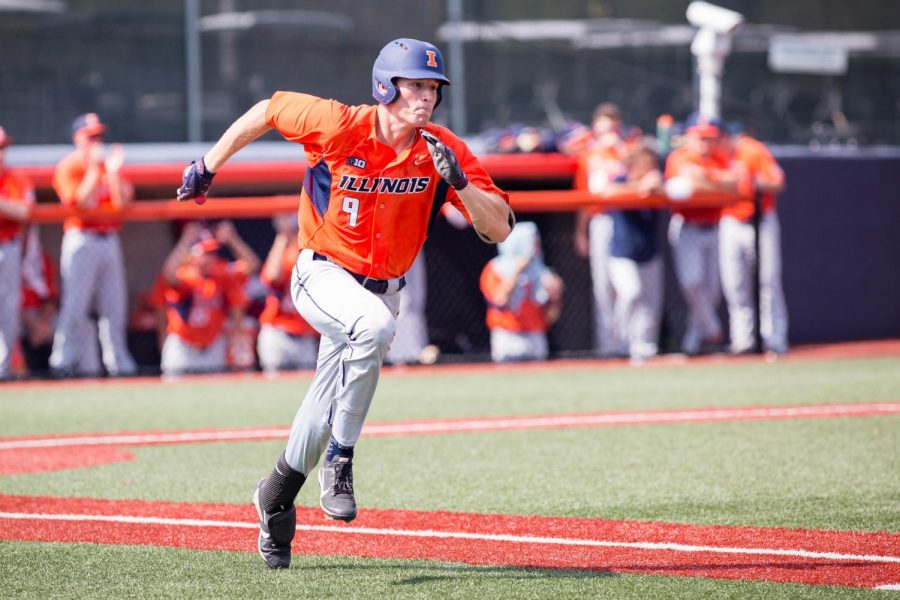 Illinois infielder Bren Spillane (9) runs to first during the game against Indiana State at Illinois Field on Saturday, September 24.

Almost no baseball was played Saturday afternoon in Evanston. But when the “real feel” — a method of factoring in temperature, wind, cloud cover, sun intensity and humidity for a more accurate reading of how cold or warm it is — hit 28 degrees, Illinois and Northwestern met on the field.

The scoreline was the same as the first game between these Big Ten foes, but it took extra innings for the Illini to walk away with a 5-4 victory.

The Illini and Wildcats traded momentum throughout the game, but the final shift occurred when left fielder Doran Turchin broke through for a line-drive double in the eleventh. The hit drove home the first baseman Bren Spillane who had gotten on base with a single earlier in the inning.

Turchin had been visibly frustrated after flying out or being put out at first multiple times.

But he made contact with the ball when the Illini needed it most.

Northwestern had the momentum early on. The Wildcats were up 3-0 in the fourth after an errant throw from second baseman Michael Massey got past Spillane and allowed two runners to score.

Catcher Jeff Korte got the Illini on the board in the fifth inning with a two-out double that scored Massey and ended the team’s longest period without a hit all season. In the sixth, the Illini tacked on three runs, capped by a Massey RBI that allowed Spillane to score to make it 4-3 Illinois.

Starting pitcher Andy Fisher lasted through the bottom of the fifth where Northwestern’s Jack Claeys hit an opposite-field homer to tie it up at four apiece. After, Fisher was relieved by redshirt-junior Quinten Sefcik (1-0, 3.86 ERA). Sefcik kept Northwestern off the board during the seventh and eighth innings.

Massey had his third hit in the top of the ninth with a double, but he was left stranded and in the bottom of the inning Northwestern had a chance for a walk-off win. However, right-handed pitcher Ryan Schmitt kept the winning run at third after relieving Sefcik, and the game headed to extras.

Neither team was able to put together much in the tenth. In the eleventh, Spillane opened it up with a single before being brought home by a big line drive from Turchin. It was enough, as Joey Gerber came in and prevented any final Wildcat offensive, securing a second consecutive 5-4 win.

Head coach Dan Hartleb attributed his team’s win to its composure when going down in games and intense situations late.

“The (Big Ten) is so balanced; all the teams are so well-coached,” Hartleb said. “We’re finding ways to win; we believe we’re going to win. Our guys never panic (or) give into pressure. We’ve played in a number of tight games. our guys are getting it They just play to win.”

He gave credit to Northwestern starter Hank Christie, who kept Illinois off the board for longer than any other team has this year.

“We hit a few balls on the nose, but I thought (Christie) had really good command and was ahead in the count a lot,” Hartleb said. “Then when Michael got the hit up the middle, we kind of relaxed a little bit and came up with a big couple of innings.”

The Illini have already wrapped up their first Big Ten Conference series victory in winning the first two games of the series against their in-state rivals.

On Sunday, they’ll have a chance to get a sweep and Turchin stressed the importance sweeping a Big Ten opponent on the road. He said that no matter who the opponent is, nothing will be given out, there are no free wins.

Hartleb was pleased with his team’s “quality at-bats,” and said they are part of why the Illini are in a position to sweep the Wildcats.

But he doesn’t think it will be easy.

“Winning series is so important, and we’ve done that,” Hartleb said. “Now we need to get greedy. Anytime you can sweep, especially on the road, it’s very difficult to do.”