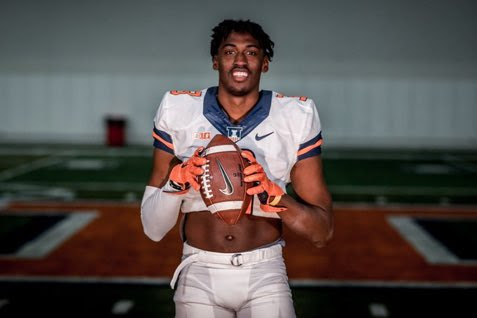 Illini football commit Marquez Beason poses during an official visit at the University. Beason’s relationship with Isaiah Williams has given Illini fans hope for the successful vision Lovie Smith has for the team.

When Marquez Beason committed to Illinois on March 10, he became the highest-ranked recruit since Arrelious Benn and Martez Wilson in 2007.

Hop forward only 13 days later, and head coach Lovie Smith decided he wouldn’t just match the chips on the table, but upped the ante.

Five-star quarterback Isaiah Williams announced he would become a member of Illinois’ 2019 recruiting class via an announcement video over his personal Twitter account Friday.

A commitment from the No. 1 prospect in Missouri and the No. 27 recruit in the country came as a surprise to many, as the dual-threat quarterback had offers from Alabama, Michigan, Ohio State and Oklahoma.

“We talked about us competing,” Beason said. “I was stoked when he finally announced it, and the world was shocked.”

Beason, the four-star athlete out of Bishop Dunne High School in Dallas, Texas had offers from over 40 schools, including Ohio State, LSU and Texas A&M. The 5-foot-11 wide receiver and defensive back sits as the No. 54 recruit in the nation. He also sits as, possibly, Illinois’ No. 1 recruiter on social media.

Ever since announcing his intention to throw on the orange and blue, Beason has been a social media machine. Any football recruit that expresses the slightest interest in the Illini program can almost guarantee themselves an interaction with Beason.

“I have a very big social media platform so people will be sending me things about people getting offers, so when I see it I just do what I do,” Beason said.

What Beason does is simply recommend recruits across the nation come join him on the football field. And while running backs coach Thad Ward, wide receivers coach Andrew Hayes-Stoker and tight ends coach Cory Patterson may be more well known as Illinois go-to recruiters, Beason feels as though he has a role to play as well.

Beason has made an effort to reach out to many of the nations top recruits, and Williams was no exception.

However, Beason wasn’t the only reason Williams committed to the Illini. Patterson coached Williams ever since he was a youngster and helped rebuild Trinity Catholic High School into a St. Louis powerhouse. The former head coach was brought on to the Illinois coaching staff to help recruit the top talent from the St. Louis area. Williams was No. 1 on his list.

The Patterson hiring for Illinois and now a Williams commitment has meant interest from several other highly ranked Trinity Catholic recruits. For example, four-star inside linebacker Shammond Cooper has long kept Illinois on his list, while four-star wide receiver Marcus Washington who was originally not heavily involved with Illinois, tweeted out that things may have changed after Williams announced his commitment.

If one thing is for sure, it is that Beason has moved on to adding these two names to his list of desired commitments, along with many others. Beason said No. 100 recruit in the nation Erick Young and No. 204 recruit Bobby Wolfe are two of his top targets.

Beason and Williams, along with a commitment from three-star tight end Griffin Moore already has Illinois ranked as the No. 24 recruiting class in the nation and seventh in the Big Ten.

With the 2019 recruiting class only set to grow, Beason is excited to get on the field and make a difference for himself and the program.

“When I step on campus I will make an immediate impact, the whole 2019 class will make an immediate impact,” Beason said. “If I went to Texas or Texas A&M I would be just another name, but at Illinois, I can build my own legacy, that’s really the big thing. I can build my own legacy and turn the program around at the same time, and put it back on the map.”