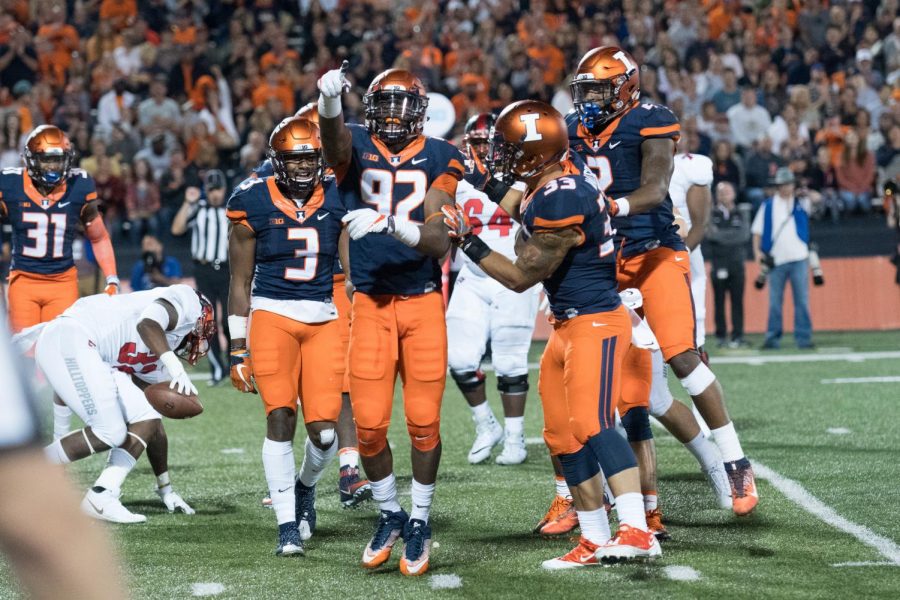 Illinois players celebrate a defensive stop in their game against Western Kentucky on September 9, 2017. Illinois picked up its second and last victory of the season in a 20-7 win.

After starters Tre Watson and Julian Jones announced they would transfer from Illinois following the team’s two-win season in 2017, it was evident the linebacking corps would be very different in 2018.

Although Del’Shawn Phillips is returning for his senior season and is expected to start, it is unclear who will emerge as the other starting linebackers for an Illinois team that will look to win its first Big Ten Conference game since a 31-27 victory over Michigan State on Nov. 5, 2016.

Phillips, who transferred to Illinois after leading Garden City Community College to a national title in 2016, is not too worried about the situation. He sees potential in many of his teammates and is confident the unit will improve significantly from now to the start of the season.

Though the Illini struggled on both sides of the ball last fall, Phillips believes the experience was helpful for his teammates who played as freshmen.

“We’ve got young guys that are getting older, which is always a plus,” Phillips said. “Of course the talent was there; we saw the talent last year. Now that those guys have a whole season under their belt, going to get a whole spring, a whole fall camp, we’re looking forward to what they can do now.”

Dele Harding, a sophomore who started five games at linebacker and was sixth on the team in tackles, is one player likely to see an expanded role.

Harding said spring ball and training camp will be crucial for the unit to click and to get the schemes down.

“Being comfortable is one thing; you’ve got to know what you’re doing each and every play,” Harding said. “That comes with getting more reps and having confidence during spring ball.”

Another player who could see an expanded role this fall is sophomore Jake Hansen, who tore his ACL in last year’s training camp and redshirted the 2017 season.

Although he is not back to full action yet, he has been doing work on his own and with the other linebackers.

His freshman season in 2016 saw him play in every single game, starting one. Once training camp rolls around, Hansen will be fighting for playing time with fellow sophomores Harding, James Knight, Ayo Shogbonyo and Marc Mondesir, junior Jimmy Marchese and incoming freshmen Khalan Tolson and Jacob Hollins.

Hansen says he is aiming to get fully healthy, to stay healthy and to become a major contributor.

“Mentally, I know the game a little bit better and understand what offenses are trying to do to us,” Hansen said. “I feel that has helped me a lot, and just the longevity of the season, being healthy the whole season as well.”

Head coach Lovie Smith was glad to get back on the practice field after the extended layoff during spring break.

He said the offense, which is adapting to a new up-tempo style under newly hired offensive coordinator Rod Smith, is still in the process of learning. He did say, however, that he has seen improvement already.

“Whenever you take a break, it feels like it’s been forever since we’ve practiced,” Smith said. “But we only have a few more practices to go, and if there is something that we haven’t seen from some of the players, they want to show us. It’s about the time.”

There are four remaining spring practice dates left for the Illini. The final practice, which will take place on April 7 from noon to 2 p.m., will be open to the public.

The Illini got their biggest commitment since Arrelious Benn in the class of 2007 with Isaiah Williams’ announcement on Friday, and although it’s early in the hunt for talent in the class of 2019, things are looking up for Illini.

Currently, the team’s three-man class consists of five-star athlete Williams (who Illinois recruited as a quarterback), four-star athlete Marquez Beason and three-star tight end Griffin Moore. As it stands, this recruiting class is ranked No. 24 in the country and No. 7 in the Big Ten, an improvement from Smith’s 2018 class, which came in ranked No. 55 nationally and No. 12 in the Big Ten.

Speaking Tuesday over the sounds of construction workers inside and outside of the Irwin Practice Facility, Smith is confident his program can maintain its forward momentum.

“That’s a good sound there, it’s a good sight too when you go outside and you see a full construction crew working,” Smith said. “We’re pretty pumped up about this new facility and what it will bring to our program. Recruiting is going well right now, and I think one of the things that has held us back a little bit in the past has been our facilities, but that’s being taken care of.”