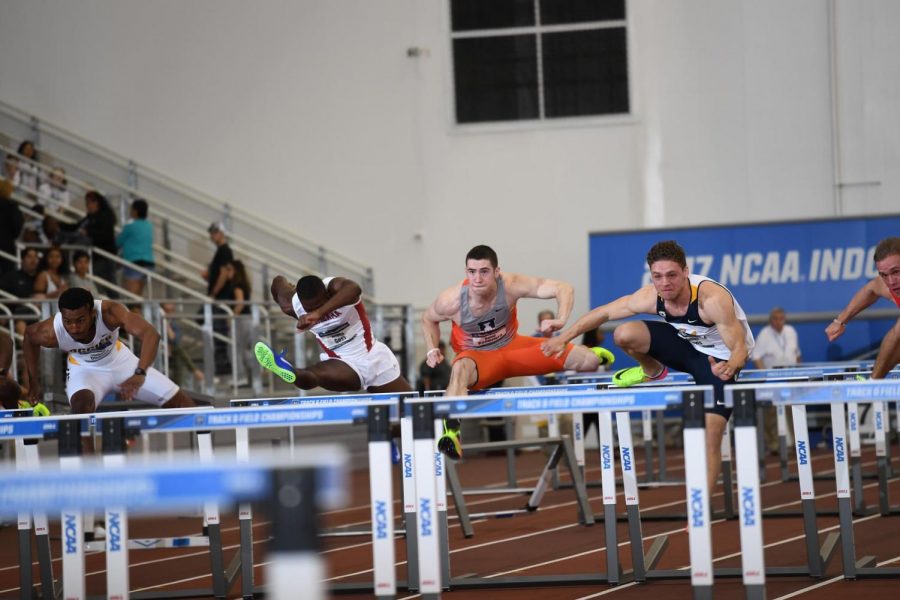 David Kendziera competes in his final NCAA championship where he finished 12th in the semifinals.

After a strong performance in their 2018 outdoor debut in Carbondale, Illinois, the Illini men’s track and field team continues to showcase great potential at the national level.

The team claimed seven different titles, highlighted by senior leader and seven-time All-American David Kendziera’s dominance in the 110-meter and 400-meter hurdles. Kendziera credits his coaching staff for getting him to the level he needs to be prior to his performances, especially when transitioning from indoor to outdoor competition.

“The preparation has changed a little bit,” Kendziera said. “My coaches have taken things from the indoor season that I need to work on and have made me focus on them as we get into the outdoor season. I also got to make sure I have a little bit more endurance because I’ll be doing three events instead of two.”

As Kendziera’s abilities and work ethic expanded, so did his leadership role on the team.

“A couple of us have taken on that responsibility,” Kendziera said. “I just want to lead by example and show them the right thing to do so they can follow in my footsteps. I’ve definitely tried to be more of a vocal leader (this year) and more encouraging… I’m just trying to help out everyone in whatever way I can, whether it’s schoolwork or track or anything my teammates need.”

One of the themes for the team so far this season has been taking advantage of opportunities. From top to bottom, each member of the team has a defined role and their success is vital for the team as a whole.

At the Southern Illinois Bill Cornell Spring Classic, multiple athletes achieved personal records time-wise and the lofty goals being set by individuals and the team has continued to become more ambitious.

Kendziera chooses to keep his personal goals private. However, he holds his teammates very accountable for theirs. As a leader, his influence resonates with the team.

“I just want to see us do as well as we can,” Kendziera said. “Helping to have some of the younger guys step up in ways that make them feel like they’re a significant part of the team — especially in those pressure situations — is important to our success as a group.”

The next big events for the Illini are the Stanford Invite in Stanford, California and Ole Miss Classic in Oxford, Mississippi. Select runners will compete in Stanford on Friday while the rest will be taking their talents to Oxford on Saturday.