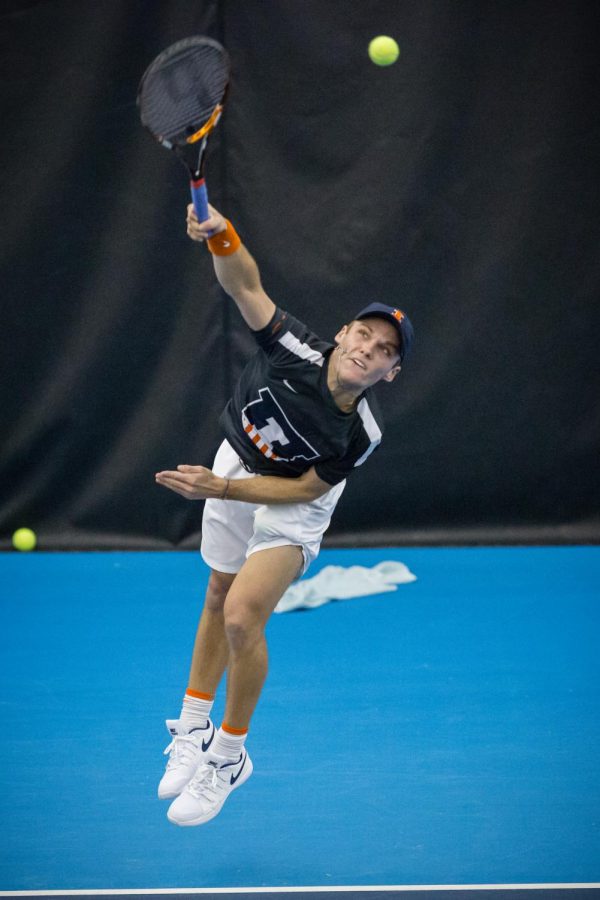 Illinois' Zeke Clark serves the ball during the match against California at the Atkins Tennis Center on Feb. 9. The Illini won 4-0.

WWhile it did not come easily, the Illinois men’s tennis team secured a 4-2 victory Saturday against Michigan.

The Wolverines jumped out to an early lead, securing the doubles point after Harrison Brown and Alex Knight defeated Illinois’ freshman duo of Alex Brown and Caleb Chakravarthi, 6-3. The victory was followed by another, this time from Runhao Hua and Mattias Siimar, who took down the Illini’s Zeke Clark and Aleks Kovacevic.

While the doubles portion of the match did not go the way Illinois wanted it to, the team would make up for it once singles came around.

“Zeke (Clark) was literally outstanding today, I’ve had a vision for how Zeke can play since we recruited him and he was awesome today,” Dancer said.

Although Hua would earn a victory for the Wolverines, beating Aron Hiltzik 6-4, 6-1, the Illini would not let their opponent have anything else, as Kovacevic, Aleks Vukic, and Alex Brown would reel off three straight victories to win the match for Illinois.

Dancer could not have been more proud of his team’s effort, especially with the way they handled adversity.

“I thought we were tough,” Dancer said. “It’s funny, I don’t talk too much about that with our team but overall it was a tough effort. I love seeing that from our guys.”

The win pushed the Illini to 15-5 and continued their perfect run in Big Ten conference play.

While the team’s performance is the most important aspect, Dancer had more than a few individual compliments for his players.

“AB (Brown was) super calm, that’s what I would say about him. Vuki, (Vukic was) tough as nails and then Kova (Kovacevic) did a great job, against a great player, of settling in and being where he needed to be,” Dancer said.

For Illinois, a home tilt with Michigan State is next up on Sunday, with Dancer’s team trying to push the conference undefeated streak to seven games.