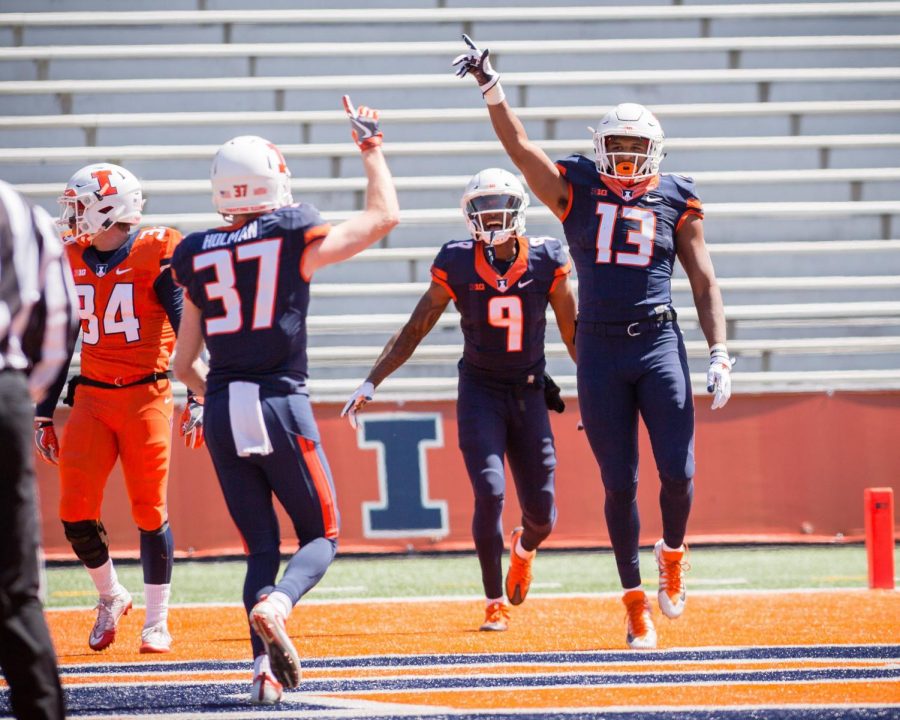 Illinois football held an open spring practice on Sunday. Community members came to watch the team run through practice drills and a scrimmage

To conclude the spring season, the Illini football team split into two teams for a scrimmage in front of faithful fans and plenty of recruits.

The roster was team Butkus rocking the orange and team Grange decked out in blue. In a rather impressive show by the offensive line, Grange took the win 38-3.

The team has been running routes and getting to know the fresh-look offense that new offensive coordinator Rod Smith has implemented.

Junior Reggie Corbin and sophomore Ra’Von Bonner were the top two in the scoring field, as Bonner gained nearly 200 yards for two touchdowns while Corbin closed to a 75-yard touchdown.

“Reggie Corbin can make you miss in open field,” said head coach Lovie Smith. “We saw some good things (on the field). When it’s offense verse defense, someone is going to look good and someone isn’t; we did have a bit of concern in that way.”

Even with slight disappointment from the defense, the scrimmage was only a taste of what is to come for the season, and Smith is confident that it is a positive progression.

“Our guys feel like they can move the ball,” Smith said. “We are heading in the right direction, but we still have a ways to go.”

Sophomore quarterback Cam Thomas plays quite the vital role in moving the ball. Throughout spring ball, he has had a good amount of one-on-one training with Rod Smith.

Lovie Smith said the solo attention is something that Thomas has really taken advantage of.

“Part of his development is getting as many reps as possible,” Lovie Smith said. “Cam has been in every situation; he’s been leading our team.”

Although Thomas feels strange telling the older guys what to do, he said they have been quite welcoming of his leadership role and trust his judgment.

For the receivers, they have spent a lot of the offseason getting to know Thomas.

“Regardless of who the receiver is, I’ve got the chemistry to make it work, so I felt pretty good out there,” Thomas said.

The running backs Bonner and Corbin appreciate Thomas’ dual-threat abilities, as they feel like it gives them more room to work.

When the quarterback signees officially come to campus, there will be five quarterbacks on scholarship, so Thomas’ one-on-one work may diminish. Although, Thomas isn’t worried, and he is focused on getting bigger in his time off.

As for running back Bonner, he is confident in his offensive line.

“We are gonna be in shape,” Bonner said. “The opposing defenses will not when we get down here in the red zone, and they get tired, we’ll just run in the end zone.”

The tempo change seemed to be the biggest difference for the Illini and one that they seem to enjoy, Bonner said. In addition, a lot of general growth has taken place throughout the spring.

“We were young last year,” Bonner said. “Nick Allegretti was the only upperclassmen on the line, but everyone has grown and matured on and off the field.”

Although spring ball only offers a taste of what is to come in the fall, the team is confident this showcase will be enough to share a simple fact as Thomas puts it: