Illinois shows up strong at home 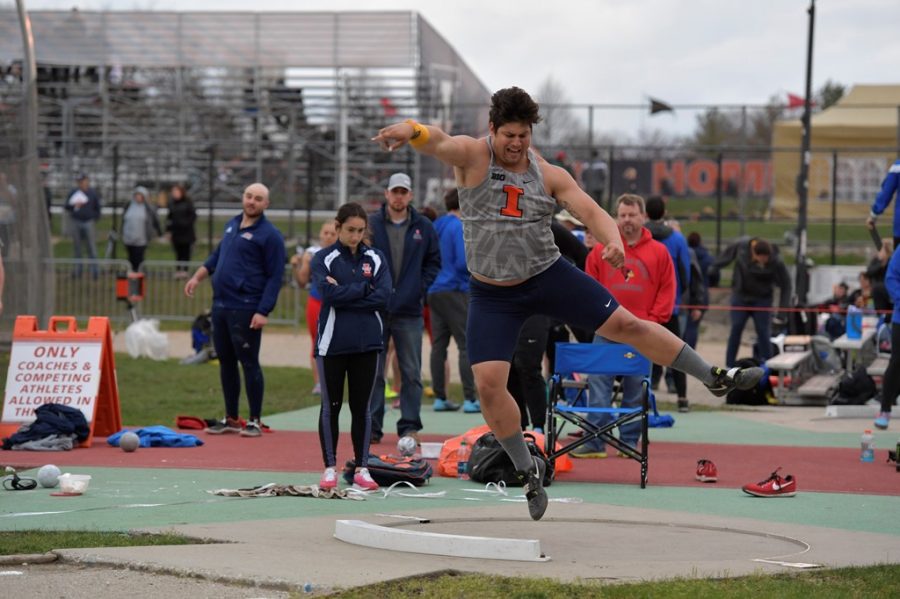 Matsen Dziedzic at the Illinois Twilight meet on Saturday

Junior Devin Quinn broke his own facility record in the 100-meter dash at the Illinois Twilight Meet. His time of 10.11 is the third fastest 100-meter time in school history.

In the field, Illinois recorded four of its 10 team victories. Seniors Parker Deloye and Matsen Dziedzic won their events, as Deloye placed first in the high jump (6’2.75”), and Dziedzic took the title in the long jump (13’10.25”). Junior Jacob LaRocca also picked up victories in the hammer throw (198’3”) and the pole vault (16’8”) respectively.

“I thought Matsen competed really well,” said head coach Mike Turk. “The first three years with Matsen came with a lot of struggles and not much success. Last year, he started to show some glimpses, and this year he’s winning track meets and performing well, and that’s a reflection of growth in both him and the program.”

Along with the three victories, seniors Mo Maat and Michael Hyc each set new personal bests after finishing in the top three in the long jump and shot put. Hyc threw for 56’3.25” while Maat cleared 23’10.25” in the long jump.

On the track, the meet kicked off for the Illini with the steeplechase. Sophomore Caleb Hummer held his pace and freshman Brayden Hamblen recovered from a rough start early on, to pass his teammate around the nine-minute mark. Hamblen finished second with a time of 9:32.21, a new personal best.

Quinn debuted in the 4×100-meter relay, in which the unit of Quinn, junior Joe Haight, senior Cole Henderson and freshman Jason Shannon finished first, with a season-best time of 39.74. The finish marked the second time that the Illini have finished the 4×100-meter relay in under 40 seconds this season.

“I thought the 4×100 races were solid,” Turk said. “I thought the men hit a really nice groove, and while they weren’t great, they were definitely solid. The exchanges last week weren’t very good, and I wasn’t happy about it, so they went out and fixed it.”

Senior Alex Gold snagged the second Illinois victory on the track in the 1,500-meter run, going neck-and-neck with junior teammate Dan Lathrop for first. The two finished within a tenth of a second of each other, running 3:57.29 and 3:57.39, respectively.

Senior David Kendzeira was next to pick up a victory for the Illini, winning for the seventh time in the outdoor season, as he clocked in at 13.52 in the 110-meter high hurdles. He remains undefeated in the event this season. Junior Jonathan Wells also finished runner-up with a time of 14.12.

After the hurdles, Quinn broke his 100-meter personal best with a time of 10.11, the fastest 100-meters any Illini has ever run under assistant coach Adrian Wheatley. Joining Quinn in second and third were Shannon and Henderson, with the former setting a personal best time of 10.42 en route to a runner-up finish.

“Devin is really elevating himself to a higher level in the sport and within the NCAA,” Turk said. “I think that as he grows, he’s going to see new challenges, so for meets like this, it’s nice that he can go out there and compete free and easy. I think he’s feeling really confident and there’s not a whole lot of pressure on him, and as we go into bigger meets, I hope he continues that mindset.”

The Illini picked up their last three victories in the 200-, 400-, and 800-meter run. Haight won both the 200-meter and 400-meter events, while fellow junior Dennis O’Callaghan ran 1:51 for his first-place finish in the 800-meter. Trailing behind O’Callaghan was senior Luke Brahm, who finished second with a time of 1:52.64.

“For me, it’s very hard not to have a personal feeling about this meet because, while it’s not the end, it’s our last home meet with a lot of really special seniors, men and women both,” Turk said. “I love them all to death, and … it’s really sad for me to know that we’re at that point, but it’s gratifying, too, that they’re the people they are. I’m so proud of them all. I think this meet sets us up now to finish the season really strong and have a great experience.”