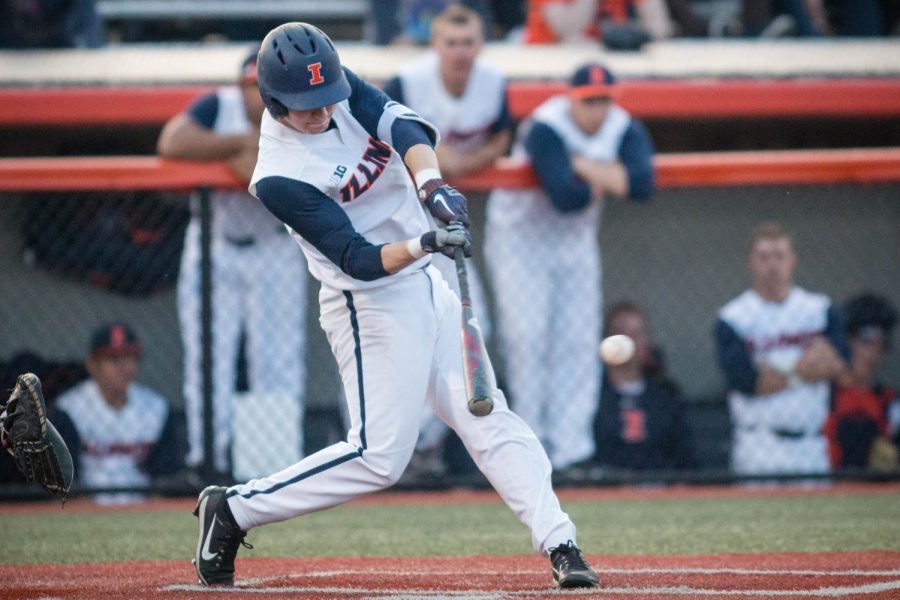 Illinois infielder Ben Troike hits the ball during the game against Rutgers at Illinois Field on Friday. The Illini won 13-12.

Illinois dropped its five-game win streak Tuesday night against Valparaiso 7-11 after struggling to find a source of reliable pitching.

The result was frustrating for a team that had just broken back into the national rankings, coming in at No. 25 in Baseball America’s poll.

Starting sophomore pitcher Ryan Schmitt was taken out of the game before even recording an out in the first inning, which saw the Crusaders (12-19, 2-4 Missouri Valley Conference) put four runs on the board.

Illinois had command issues all night. The Illini resorted to five different pitchers, all of whom gave up numerous hits and runs, with the exceptions of freshmen left-hander Jimmy Burnette and right-hander Ryan Kutt. Brunette gave up two hits in 1 1/3 innings but kept the Crusaders from scoring any more runs, while Kutt came in to close in the ninth and held the opponent.

Head coach Dan Hartleb expressed his frustration with the pitching staff, criticizing the group’s inability to consistently throw strikes and put the team in favorable counts.

“We were very poor on the mound,” Hartleb said. “There wasn’t one pitcher that went out and did a good job. We were behind in the count on a regular basis and then, being behind all the time, we didn’t throw quality pitches.”

Though Valparaiso had a hot first inning start, Illinois answered with four runs of its own, three of which came via a Doran Turchin blast. Junior catcher Jeff Korte batted in right fielder Jack Yalowitz to tie it up at four apiece with a two-out single.

However, Valparaiso’s Chad Jacob knocked one over the right-field fence for a two-run homer in the third, which made it 6-4 Crusaders.

Junior Michael Michalak drove in Turchin to make it 6-5 in the bottom of the third. Michalak has been filling in at first base while D1Baseball.com Midseason National Player of the Year Bren Spillane, junior, has been sidelined with a sprained ankle.

Sophomore shortstop Ben Troike, who has reached base in 37 consecutive games dating back to last season, said Spillane’s absence doesn’t change the fact that the team has a wealth of potential throughout the lineup.

“Our lineup is definitely plenty good to not have (Spillane) in there,” Troike said. “We played most of the weekend without Bren and we still put up our runs; we fought and we got Ws in those games.”

Though the Illini ended up posting seven runs, it was not enough to match the hitting of the Crusaders.

Illini sophomore relief pitcher Zack Jones was removed in the fourth inning after giving up a two-run home run to Blake Billinger after he was inserted for Schmitt in the first inning. Junior right-hander Quentin Sefcik was put in to relieve Jones, but he gave up three earned runs of his own.

Hartleb did not hold back in his criticism following the game.

“They pitched terrible,” Hartleb said. “That’s what I learned (about the pitching staff).”

The team is off on Wednesday after the short turnaround for Tuesday’s game. Hartleb’s squad will return to practice Thursday in preparation for the weekend series in Champaign against Grand Canyon.

“We’ll practice hard on Thursday and hopefully we’ll come out in a good frame of mind,” Hartleb said. “To me, tonight was just a matter of guys; they just came out and put their uniforms on. We had no intensity; we just played poorly from the start.”