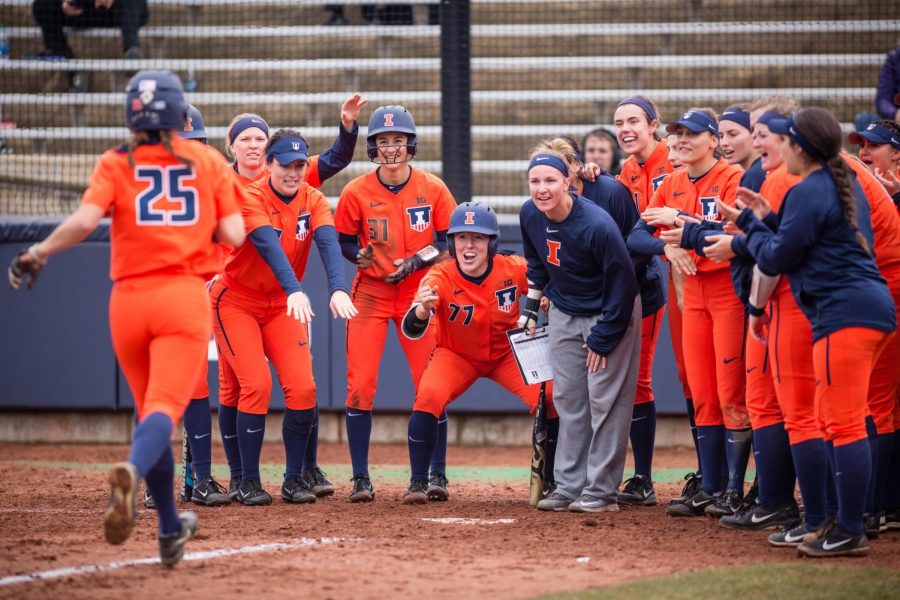 The Illini softball team celebrates at home plate after outfielder Carly Thomas (25) hit a home run during the game against Northwestern at Eichelberger Field on Wednesday, Mar. 28, 2018.

At the start of the bottom of the fifth inning on March 28, the Illinois softball team was down 8-0. It was cold and only the first game of a doubleheader.

But, every time a player was at the plate, the Illinois dugout was up and loud. Each batter had their own cheer, and every time a pitcher fell behind in the count, a chant of “You’ve still got three balls!” echoed across the field.

After the Illini’s second home run of the inning made it 8-5, junior catcher Stephanie Abello came into the dugout as one of the runs batted in. As she began to descend the stairs, she let out a loud yell.

“Will you ever give up?”

Followed by the whole dugout responding with a resounding, “No.”

These cheers are as much a part of the Illini gameday as the crack of the bat or the smack of a ball hitting the catcher’s glove, and go back just as far.

“I grew with the softball culture of cheering, even when I got to college with LSU, and Nichols State before I went to LSU,” Perry said. “We had some of the best cheers.”

That tradition has continued to Perry’s current team, as there is never a dull moment in the Illini dugout on offense.

Perry said the cheers gave her teams energy, something she requires from this team.

“For me, energy is important in the dugout,” Perry said. “Cheering is maybe their choice, but I’ve heard some creative things come out of the dugout and I love it.”

For first baseman Kate Giddens, the cheers go right along with the culture of the team.

“I think it adds to our atmosphere,” Giddens said. “It’s like the Illini way almost. It doesn’t start with us, it started with the people previous to us.”

Perry said in her day she was part of making the cheers, but now she’s passed it on to the players.

Giddens said there were a number of cheers that have been handed down from previous teams and players, but that this team has put their own spin on some of the classics.

Although, they aren’t all hand-me-downs. Gidden’s favorite cheer is a new creation, based on the old Playhouse Disney children’s show “Out of the Box,” which ended in 2004.

The cheer is executed after the opposing team takes their pitcher out, likely after an Illini scoring run. The chant is practically the close theme of the show with the lyrics, “So long… farewell… to you my friend… goodbye for now until we meet again.”

Many of Illinois’ cheers have a similar tone, but with an aggressive edge. However, they also have a good number that is focused on their own players as opposed to the opposition.

Giddens said that she and senior third baseman Sam Acosta are the current masterminds behind the Illini cheers.

Some of the cheers don’t even have lyrics. For senior Rowan McGuire, the best cheer is the one right after the Illini get a hit.

“We get to have someone run down and back, and that one’s just really high energy,” McGowan said. “It’s just a lot of screaming; there’s no words, just scream all day.”

While the production on the field has been inconsistent, the energy from the players has not. No matter if the Illini are up 20-2 against Maryland or working through a cold day against Northwestern, the cheers come loud and often.

“It’s a culture we’ve been brought up in,” Giddens said. “We’re just trying to keep that tradition going, keeping people a little light-hearted instead of having tense focus around all the time.”