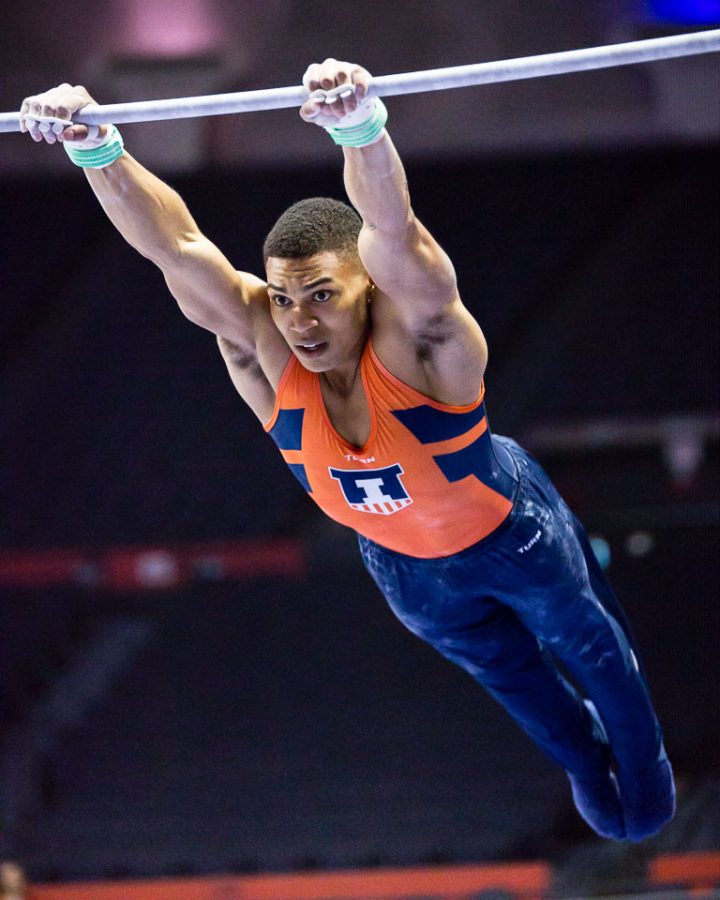 Illinois’ Chandler Eggleston performs on the high bar during the Men’s Big Ten Gymnastics Championships at the State Farm Center on April 7, 2017.

The team competed alongside Stanford, Oklahoma, Nebraska, Minnesota and Penn State in the finals.

The No. 2 ranked Illini had a strong end to their season, which included the program earning its 28th Big Ten title.

The Illini were sitting in third place after the first and second rotation, but a strong showing from redshirt senior Chandler Eggleston on the vault with a season-best 72.431 pushed the team into second place after the third rotation.

Senior Bobby Baker and junior Johnny Jacobson also had season-best performances. Jacobson put up a score of 14.666 and Baker a score of 14.233 on the parallel bars to keep the Illini firmly planted in second place after the fourth rotation, with a total score of 277.826.

Heading into the final rotation, Illinois had a score of 342.691, keeping them in second place behind Oklahoma.

To close things out, the Illini competed in the floor exercise, starting off with a 13.500 from sophomore Jacob Light. The Illini struggled to put up consistent numbers during the event but did finish strong with a 14.336 from sophomore Sebastian Quiana.

The final rotation came down to the wire for all teams. Minnesota ended up topping Illinois for the second place finish with a score of 411.689 to Illinois’ 411.689.