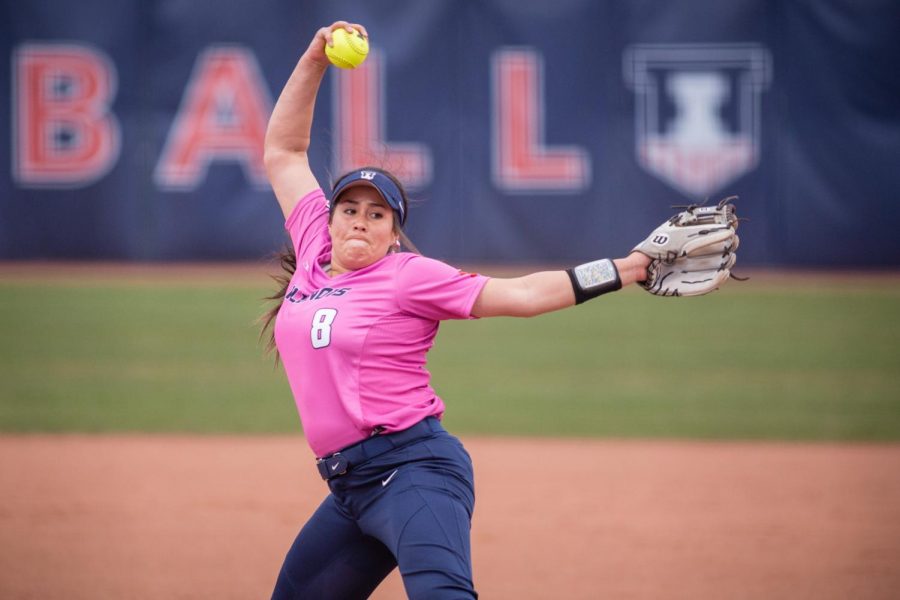 Illinois starting pitcher Emily Oestreich (8) delivers the pitch during the game against Iowa at Eichelberger Field on Saturday, April 21, 2018. The Illini won 6-5.

After easing its way to a 7-1 win Friday night against Iowa, Illinois found itself clawing back in a nail-biting battle on Saturday. The Illini are now 2-0 in its Big Ten series with the Hawkeyes and 8-6 in conference play, 29-15 overall.

“I think, in both games, there were similar elements,” Perry said. “We came out ready to play Iowa, who are really a good team. We knew that and had to have a great plan and a great game plan in order to have success against them.”

The Illini offense bulldozed over the Hawkeyes with the help of freshman Bella Loya and junior Carly Thomas’ bats in the first game. Thomas went 4-for-4 with two doubles and a triple while tallying three runs and two RBIs on the day. Loya followed with a 2-for-4 performance at the plate and three RBIs.

The series opener was deadlocked, scoreless until Thomas clocked a double out to right center in the bottom of the third, scoring junior Kiana Sherlund.

The remainder of the inning saw three more runs. Loya singled out to left, sending Thomas around the bases, followed by senior Rowa McGuire smacking a double to left center for Loya to score. Senior Sam Acosta singled to left and was able to beat a throw to second, allowing McGuire to score for the Illini.

In the fourth, the Hawkeyes opened up with a single run off of an Illini fielding error. But Illinois answered back, with a pair of singles from Thomas and Loya that sent junior Alexis Carrillo and Thomas in to score, respectively.

Illinois capped off its edge on Iowa in the sixth with another run off Loya’s bat. The Illini catcher singled to left field, bringing home Thomas for her third run of the evening.

“I think, when you look at our stat lines, you see that we are supposed to beat (Iowa),” Edwards said. “No matter what,  the win means a lot to us, and I knew we were capable of doing it.”

When the Illini took the field on Saturday, they saw a much different Hawkeyes team.

The contest was knotted up 5-5 Saturday evening at Eichelberger Field. The bases were loaded and Iowa sophomore Lea Thompson was up to bat.

Illini junior Taylor Edwards threw a pitch that sprung into right field off of Thompson’s bat. Junior Kiana Sherlund recorded the out but had to act quickly with a runner tagging in from third and Iowa threatening to take the lead.

Sherlund looked down the line to home plate and catapaulted the ball toward home plate. Nearly grazing the dirt, Junior Stephanie Abello scooped up the ball and made the tag to end the inning.

Perry said she wasn’t surprised by the fast thinking of Sherlund.

“I think people forget that you’re so connected to your players,” Perry said. “Especially someone like Kiana who works tremendously hard and gives her best in every practice. Even as a fan of sports, you want to see a player like that succeed. It keeps us alive.”

Sherlund may have made the defensive play of the game, but Carrillo’s single to left earned the accolade on the offensive side of the ball, bringing Acosta in for the walk-off win.

Loya had a huge game for the Illini, going 3-for-4 with one run. Acosta went 1-for-4 with two RBIs, and Abello also went 2-for-3 with one RBI.

According to Loya, both games pressured her team to fight on offense. She said that one of the reasons she was able to adjust to Iowa’s pitching was with preparation in practice.

“We had a lot more fight (Saturday) for the situation against Iowa,” Loya said. “I think we have really good preparation before the game. In practice, coaches point out the pitcher’s go-tos and their usual patterns. This week,  we were served a lot of rising balls.”

Loya also mentioned that despite the few errors, the Illini have always stayed resilient on defense, especially against the Hawkeyes Saturday.

“We’re a very strong defensive team,” Loya said. “Today, we had a couple of mess-ups, but coach Trout has a saying that goes, ‘Stay tough and have each other’s backs.’ And that’s exactly what we did today.”

According to Edwards, the Illini struggled to start off the game, but once the team found the energy to match its skill on the field, the win followed suit.

“I would say both of our games got off to a little bit of a slow start,” Edwards said. “But once we came together and really started fighting, that changed. There are times we can be there and not really be fighting, so we just have to show the crowd and show each other what we’re made of.”

On Sunday, the Illini completed the series sweep of the Hawkeyes with a 9-7 victory .

Illinois will face IUPUI and Eastern Illinois this week before continuing conference play over the weekend against Penn State.