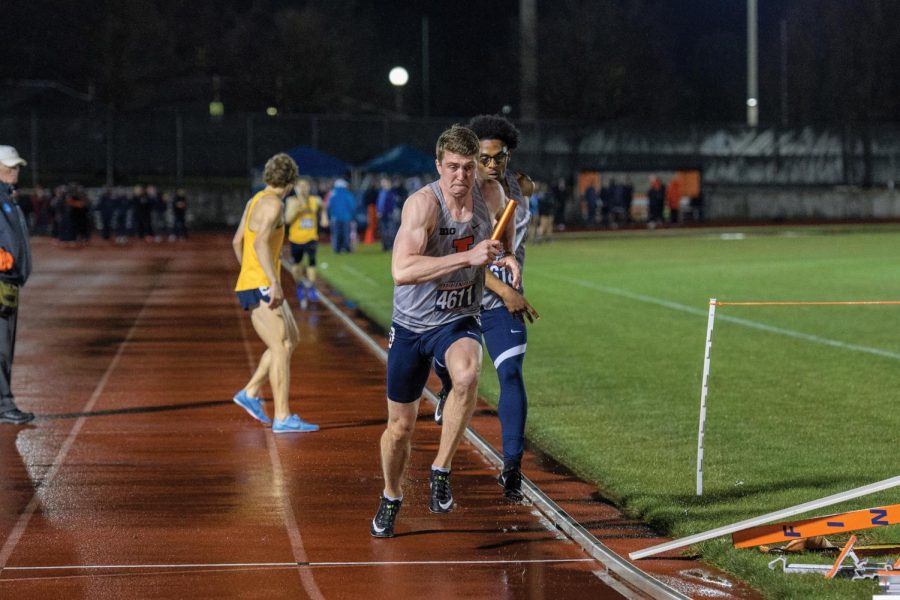 The Illinois men’s track and field team finished third overall in the 2018 HyVee Cup competition at the 109th Drake Relays.

The Illini scored six points in three relay events, while senior David Kendziera led the team out of relay competition with a victory in the 400-meter hurdles.

“I thought they handled the pressure of this meet really well,” said head coach Mike Turk. “One of the things that I was really pleased about was that when things didn’t immediately go our way, we ended up gathering to fight to the end today, and I was really pleased with that.”

Outside of the relay competition, Kendziera’s 400-meter hurdle was the fastest intermediate hurdle race ran in ten years.

Timing 49.94 seconds, Kendziera took the victory and finished over half a second faster than Chris Douglass of Iowa (50.52). It is the fastest time in the event at the Drake Relays since Justin Gamon timed 49.26 back in 2008, and it’s the third time Kendziera finished the 400-meter hurdle in under 50 seconds this season.

Throughout the weekend, the men’s 4×400-meter relay team set two back-to-back season-best times, finishing with a time of 3:09 on Friday and lowering it further to 3:07.64 to finish third in the final event on Saturday. Kendziera anchored for the team, running 46.50.

The 4×400 had surprise performances from another pair of seniors, jumper Parker Deloye and Kenneth Allen, who was returning to the lineup after recovering from injury.

“Kenneth Allen was a big addition coming back into the lineup,” Turk said. “Even though he’s not 100 percent, he’s a really experienced veteran for us and he’s been through all this stuff. To have him out there, he definitely brings a presence that instills confidence in the rest of the guys. Parker Deloye also stepped in and filled a hole in the 4×400 in the finals, and he amazed me with how well he ran. He just went out there and competed his best. He got an opportunity and made the most of it.”

After also qualifying for finals on Saturday, senior Mo Maat was substituted into the anchor leg of the 4×100. The unit of freshman Jason Shannon, senior Cole Henderson, junior Joe Haight and Maat kept up with Purdue and Ohio State into the final straightaway, although Ohio’s Zach Bazille finished just ahead of Purdue’s Waseem Williams and Maat. Their time of 39.89 is their third-best mark this season.

“I think that we’ve just got a really good group of sprinters. Of course, Devin is really good and often provides us with an anchor, but today we made a switch with Mo Maat, and given that, we ran extremely well against the top teams in the Big Ten,” Turk said. “Ohio State is one of the top teams in the country in the 4×100, and those teams have run faster than us so far this year, and given our big lineup change, we were right there with them.”