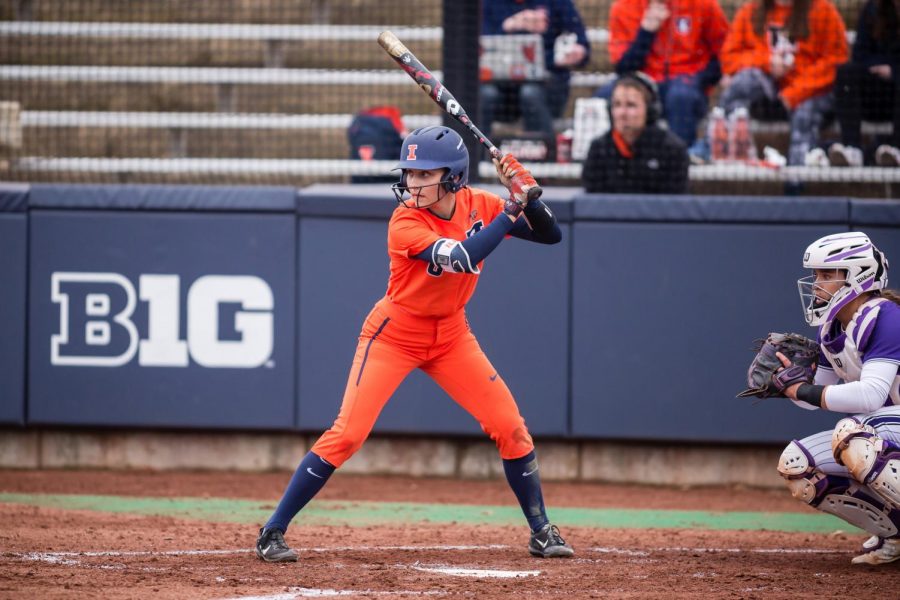 While it was an unusual 48 hours for the Illinois softball team, the Illini weathered the storm to sweep a Saturday doubleheader at Penn State.

The Illini played an inning-and-a-half Friday night, giving up three early runs to the Nittany-Lions. However, thunderstorms in the area would postpone the remainder of the game until Saturday afternoon, which junior outfielder Kiana Sherlund felt helped the team regain its focus.

“It was good for us,” Sherlund said. “We started off the game with a 3-0 deficit, which is never the way you wanna start off the game, obviously, but it was good to take a little breather, take the night off (and) watch video, and we came back.”

The Illini made a comeback in the first game Saturday, as junior catcher Stephanie Abello got them on the board with an RBI single, scoring Carly Thomas.

Still trailing 4-3 heading into the sixth inning, Illinois put together a big inning to gain the upper hand.

The team loaded the bases before senior catcher Rowan McGuire came up with a pinch-hit single to score Leigh Farina. Abello continued her good offensive performance, coming up with a two-RBI single, followed by a Bella Loya two-RBI double and a throwing error that allowed Maddi Doane to score. Before long, the Illini, who were behind to start the inning, led 9-4 heading into the bottom of the sixth and would go on to close out the game 10-4.

Although her team had to wait a day to get back on the field, head coach Tyra Perry was happy with its response.

“We showed a lot of resiliency considering we started the game last night, but we were able to come out today and re-focus,” Perry said. “We ended up giving up three runs in just a short span of time (yesterday), but today, we were able to gain some ground and come back to win the game.”

In the second game, the Illini jumped out to an early lead and refuse to take their foot off the gas. Kiana Sherlund led off with a home run, and the Illini loaded the bases in the second before walking four consecutive times and leading 5-0 after two innings at bat.

Regardless of the runs scored, it was the pitching that impressed Perry the most.

“Anytime you’re playing a double-header against a Big Ten team, it’s gonna be tough so, it was great in game two to come out strong behind the arms of Akilah Mouzoun and Emily Oestreich,” Perry said.

Mouzoun would start and record the first four outs for the Illini before being relieved by Oestreich, who finished the final 5.2 innings, giving up just two unearned runs.

As the pitching held Penn State at bay, Sherlund broke the game open with a fourth-inning grand slam. Illinois took the game 11-4.

“Whenever Kiana is aggressive, the other teams have to watch out because she’s so talented in that she can lay down a bunt, put down a slap (or) swing for power,” Perry said. “She’s one of those rare kids that has speed on the bases (and) hit runs in.”

Sherlund acknowledged that Perry wants her to take an aggressive approach and has even shown her the data to back it up.

“Coach Trout and coach Perry showed me a stat where my batting average is a lot higher when I swing at the first two pitches, and I am definitely making an effort to be aggressive and swing at hittable pitches early in the count,” Sherlund said.

The Illinois bats were certainly clicking on Saturday, scoring 21 runs total. Sherlund felt they got into a rhythm after repeatedly facing the same pitcher from Penn State.

“Penn State has two pitchers who spilt most of the innings, and by the second game today, we had seen everything they had, so (it) kind of felt like batting practice to a lot of us because we knew everything they had already,” Sherlund said.

While many Illini batters had success at the plate, it was Sherlund who stood out. In fact, Sherlund appears to have a knack for doing damage with lots of runners on base.

Of her six home runs this season, Sherlund has four grand slams, which she credits to her teammates for getting on base. Her offensive heroics on Saturday helped to propel the Illini to 33-15 overall.

“I don’t know what’s happening with that,” Sherlund said. “Obviously that can’t happen if the bases aren’t loaded, so kudos to my teammates. I never thought that would be the stat I would have because every time it’s happened I was just trying to hit a ground ball up the middle, and it goes further than I think it ever would.”

The Illini’s quest for a sweep would fall short on Sunday, as Penn State rallied to force the game into extra innings before prevailing in the ninth on a Tori Dubois walk-off homerun. This earned them a victory, which has come few and far between for the Nittany-Lions, who improved to 7-39 this season.

The Illinois bats were quiet most of the day, but two passed balls allowed them to take a 3-2 lead heading into the bottom of the fourth, before Penn State would tie things up on an RBI single by Dani Fey. The two teams were deadlocked until the ninth, when Dubois’ blast sealed the Nittany-Lion victory, pushing the Illini to 33-16 on the season.