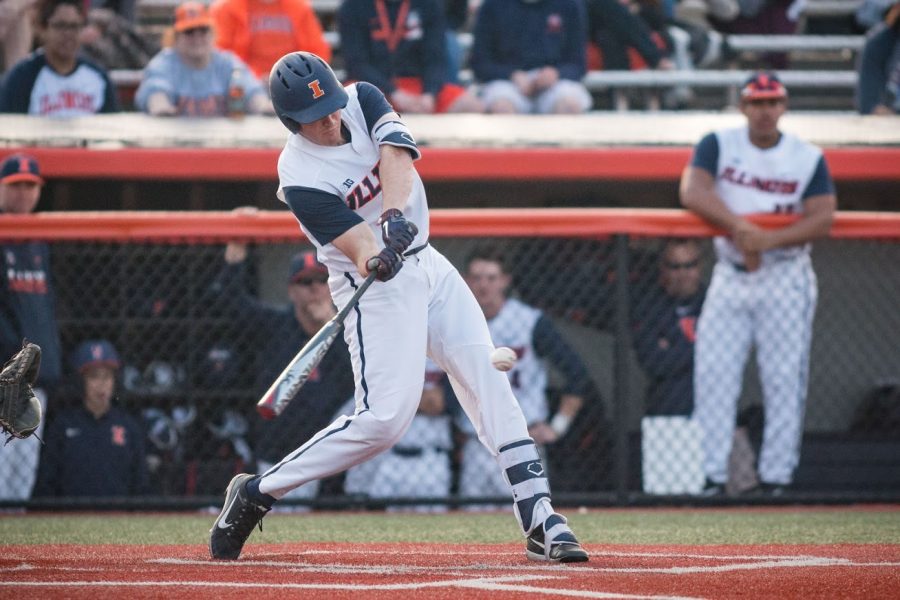 Illinois infielder Bren Spillane (9) hit his 22nd home run of the season in the bottom of the seventh to make it 11-8 on Saturday, May 19.

Illinois was looking to sweep a Nebraska team that had no postseason to play for on Saturday afternoon, but the Cornhuskers rode a six-run burst in the seventh inning to an 11-8 win in the regular season finale.

Things started well for the Illini, who got off to a 3-0 lead despite being outhit 15-8 on the day.

Second baseman Michael Massey singled through the second base gap after his grounder got by Nebraska’s Zac Repinski, which allowed Bren Spillane to score from first base to put Illinois ahead 1-0 in the bottom of the first inning.

Right fielder Jack Yalowitz smacked one over the right-field fence in the bottom of the second inning, good for his fourth home run of the year, which completed the team’s early scoring burst.

Nebraska came back in the fourth inning with three runs, a run started when Angelo Altavilla singled to left field. The junior third baseman went 4-for-5 with two RBI’s despite coming into the game batting .228.

The Cornhuskers added two more in the fifth with a sacrifice fly and an RBI-single from Altavilla, giving them a 5-3 lead.

Illinois answered with three runs in the bottom of the sixth to take the lead back after catcher Jeff Korte doubled to left field to score Michael Michalak and Massey. Third baseman Grant Van Scoy flew out to center next, but Turchin was able to tag from third to score, then center fielder Zac Taylor doubled to bring in Korte and it make it 6-5 Illinois.

The bullpen was unable to keep Illinois ahead, as four relievers combined for 5.9 innings, giving up eight earned runs on nine hits.

Nebraska poured on six runs in the seventh, mostly as a result of home run blasts from Keegan Watson and Zac Repinski.

Big Ten Player of the Year frontrunner Bren Spillane hit his 22nd home run of the season in the bottom of the seventh to make it 11-8, but Illinois could not overcome the deficit.

The loss dropped Illinois to 31-18 (15-9 Big Ten Conference) and resulted in the team getting the No. 4 seed for the Big Ten Tournament, which begins Wednesday.

The Illini will take on No. 5 Indiana (36-15, 14-9 Big Ten Conference) in a chance to avenge an earlier series loss in Bloomington in late April.

Designated hitter Michael Michalak, who had two hits on the day, emphasized the importance of Illinois being able to move on from the loss and focus on the Big Ten Tournament.

Hartleb lamented Illinois’ inability to preserve its leads and extend them when on the front foot.

“We had two different innings where we had a three-run lead, and then we have a two-run lead after we come back,” Hartleb said. “Both times we have leadoff walks and then don’t overcome that. We just need to do a better job of attacking, especially when in the lead.”

In light of his home run, Yalowitz said his confidence has received a boost. After a season of batting .223, a home run and two RBI’s were welcomed.

Like Michalak though, Yalowitz maintained that Illinois must immediately turn its focus to its 9 p.m. CT showdown with Indiana in the Big Ten Tournament opener on Wednesday.

“We went out and beat them Friday night, and then Saturday we played a really tough game and we lost in 12 innings,” Yalowitz said. “We easily could’ve taken two from them at their place. I look at it as payback, it’s also a game that can help build our resume even more if we go and beat Indiana on national television.”