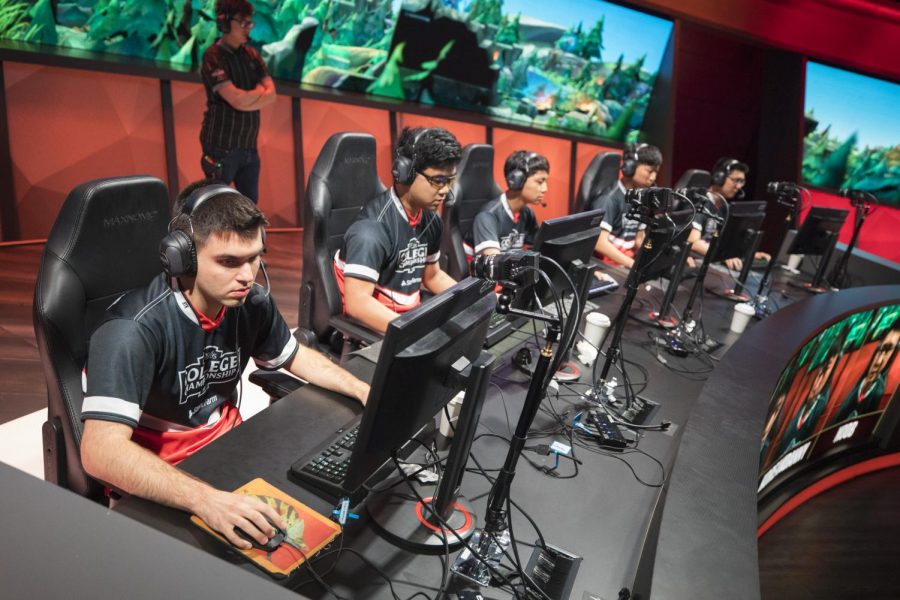 The Illini playing Maryville at the League of Legends College Championships in Los Angeles. Illinois will take on No. 5 seed Columbia in the semifinals on Saturday at 2 p.m. central time.

Coming into this week’s League of Legends College Championship, few would have expected No. 8 seed Illinois to make much noise. The Illini came in rather unheralded and without the funding or scholarships many national e-sport powers have, but that hasn’t affected the team’s ability to get results.

League of Legends is an online multiplayer game where five players on each team summon champions with specialized abilities and battle other teams to destroy each others’ “nexus,” a structure at the heart of a base that each team works to protect.

As the game goes on, each player’s champion works to grow stronger by collecting items and experience while keeping the goal of destroying the other team’s nexus at focus.

The Illini qualified for the eight-team tournament by coming in second place in the Big Ten behind Maryland. Illinois entered as the No. 8 seed, which meant it was matched up with No. 1 overall seed and defending national champions Maryville. Illinois surprised many on the scene and those following the live stream on Twitch by having their way against Maryville, not looking overmatched and gradually gaining the upper hand, until they were able to take down Maryville’s nexus.

The Illini, who with the exception of Joshua Kim, a sophomore who plays as Xeno, were ranked far below Maryville’s players individually. Kim is a top-50 League of Legends player in the world and works as Illinois’ mid-laner, a position that allows him to weave his champion interchangeably through multiple lanes and focus his efforts on controlling the flow of the battle in crucial areas.

The unexpected victory set up a matchup against another e-sports power, Columbia College, which was the runner-up in Maryville’s region of qualification. Illinois, unlike its two opponents and other traditional powers present, like California-Irvine, does not get much support from the University. There are no scholarships for e-sports or University officials who help guide the team. The organization has had to do it all within itself.

Danny Yoon, a senior in statistics, said that he and the team hope their achievements bring attention to their organization and the potential for e-sports at Illinois. With support from the University and the resources that other programs have at their disposal, the Illini believe they could do much more.

Junior economics student Charles Uram is glad that after countless hours dedicated to the game, he and his teammates are getting some recognition.

“It felt really good that all the hard work paid off,” Uram said. “We weren’t wasting our time, we were actually improving. Recognition is a big thing. My parents don’t understand the game but I know they were watching, they were really excited. That’s a big thing for me.”

The team has been together all year, competing second semester, but practicing for at least ten hours per week between competitors. Practice consists of the team working together and individually at the game, practicing with the variety of champions and trying to find the strategies that can best exploit their opponents, but also play to the team’s strengths.

He noted how, in the time he was away from the organization, that it made massive strides competitively and structurally. When he first joined, things were more about just having fun and playing a game they all loved. Now, the organization has taken itself to the level where it can compete with the nation’s — and some of the world’s — best.

“After beating Maryville, we’re really hyped,” Yoon said. “It was a very nerve-racking win, but we are confident (now). We know our weaknesses and strengths after watching a lot of games and practice. I believe with our communication and talents, we can go even beyond we imagined.”

If Illinois can beat No. 5 seed Columbia on at 2 p.m. on Saturday, it will advance to the finals against the winner of No. 2 UC-Irvine and No. 6 Maryland.

To do so won’t be easy, but Uram and the Illini know what they’re capable of, they’ve already proved it to themselves.

“If we get a lead early on it’s going to be very exciting, but they’re a very good team,” Uram said. “So we know just because we have a lead we can’t be greedy and push too much. If we give them an inch, they’ll come back really hard.”

Regardless of the final result, Illinois is priding itself on making the top four and for bringing attention to e-sports at the University.

After tons of time poured into the game and working to get to the top of the game competitively, having their work rewarded by friends, family and the gaming community is a major accomplishment for the Illini, especially without the resources from the University that most of their competitors have.

“Even my parents, they don’t really know what I’m doing,” Yoon said. “I’m just going to LA for free, that’s what they know. Going on TV and representing the school itself, it’s great for me because our team did not get any recognition from school, only a little bit from our friends.”

The semifinal between Illinois and Columbia will be live streamed on Riot Games’ Twitch channel for free at 2 p.m. Central Standard Time.