Turchin looks ahead to pro career, reflects on time at Illinois 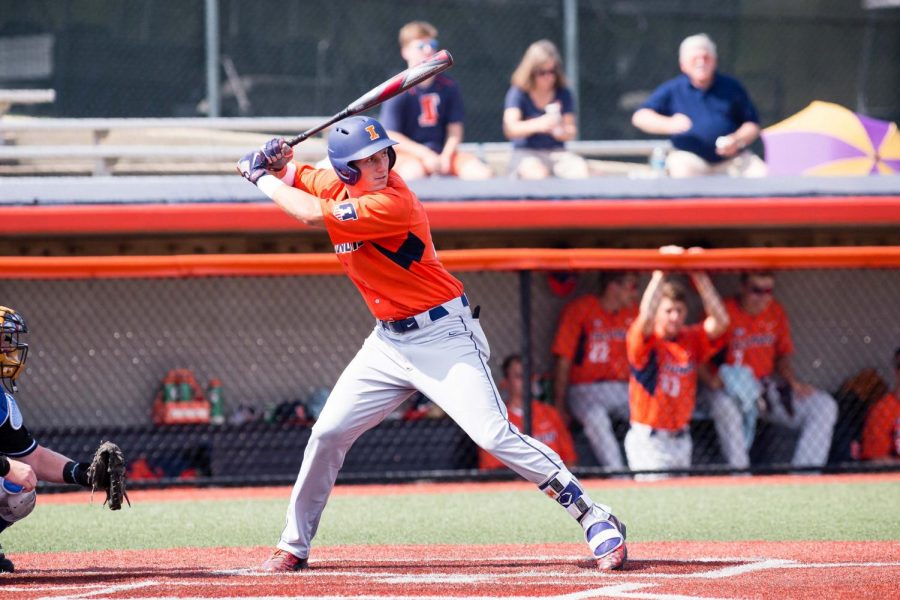 Illinois outfielder Doran Turchin waits for the pitch during the game against Indiana State at Illinois Field on Sept. 24. Turchin was drafted by the Baltimore Orioles in the 14th round of the MLB Draft.

When Illinois baseball’s Doran Turchin was selected in the MLB Draft by the Baltimore Orioles, it signaled the end of an era.

Turchin, an All-Big Ten third team selection, is coming off a strong season with Illinois, posting a .272 batting average (fifth on the team) along with nine home runs (third). He put up career-best totals of 32 RBIs (fourth), a .503 slugging percentage (third) and he started in all 53 of the Illini’s games.

He had to wait until June 6 for the 14th round and the No. 415 selection, but the junior from Oak Creek, Wisconsin, was relieved to finally hear his name called into the ranks of professional baseball.

“(It was good) to finally be able to take a deep breath and let it soak in a little bit and finally realize a dream of mine came true somewhat,” Turchin said. “Obviously, my dream is to play in the major leagues, but this is just the first step of it.”

Like many players drafted, Turchin watched the draft at home with his family and friends gathered around him. He saw Illini teammates Bren Spillane and Joey Gerber go in the third and eighth rounds the day before him, so getting selected himself was a relief and a reaffirmation of the work he’s put in over the years.

“You put in all the time, energy, things you go through, ups and downs,” Turchin said. “For (the Orioles) to think of me and want me to be part of the organization means a lot to me.”

Scouts were impressed throughout the year by Turchin’s power at the plate — opposing pitchers often walked him when trying to avoid his strike zone, but he still collected 96 total bases (third on the team). He also brings lots of speed to the table, stealing 11 bases (second) and regularly using bursts of speed to make plays at left field for the Illini. He didn’t make an error all season, earning a 1.000 fielding percentage.

Ahead of finding out where he’ll play in the Orioles’ farm system, Turchin is maintaining his focus on the simple things: playing hard, keeping his head down and playing with consistency.

That last one’s the most important.

“(Baseball is) a game of failure, I’ve always said that,” Turchin said. “It’s one of those things where if you can be consistent, day in and day out, you’re able to make it pretty far in the game of baseball.”

Along with Turchin, Spillane and Gerber, Illinois right-handed pitcher Luke Shilling and center fielder Zac Taylor were also selected in the draft, with Taylor still unsure of whether he will stay or go pro. Turchin credited the staff and environment at Illinois during his career for being able to develop pro-level prospects, as well as teaching him life lessons.

One of the most prominent lessons Turchin will be taking with him to the pro ranks is that of dealing with failures, which baseball always manages to produce from those who play it.

He’ll never forget catcher Mark Skonieczny’s walk-off home run to clinch the series over Big Ten-leading Maryland in an otherwise disappointing 2017 campaign, Turchin said. And he’ll treasure his 2018 team’s surprising run in the Pac 12-Big Ten Challenge when Illinois dispatched the likes of then-No. 11 UCLA (2013 NCAA Champions), 2012 NCAA Champions Arizona and Washington. The Huskies have gone on to a shocking run to the College World Series after barely making it into the tournament over Illinois and Arizona.

With many of the 2018 Illini’s leaders departing for professional ball, the team will have to rely on those who have been in the program for some time but have yet to play much and a group of incoming talent to continue to build on its winning year.

Turchin has complete faith in the guys he’s leaving behind in Champaign. He knows what’s important and his teammates know it too.

“Main thing’s first: You’ve got to have fun,” Turchin said. “If you’re not having fun, this game’s going to beat you up real quick, real easy. Enjoy the time, enjoy the grind. We’re blessed to play this game still; there are a lot of people who want to play it.”