Big Ten Media Days: Style of offense is its own battle 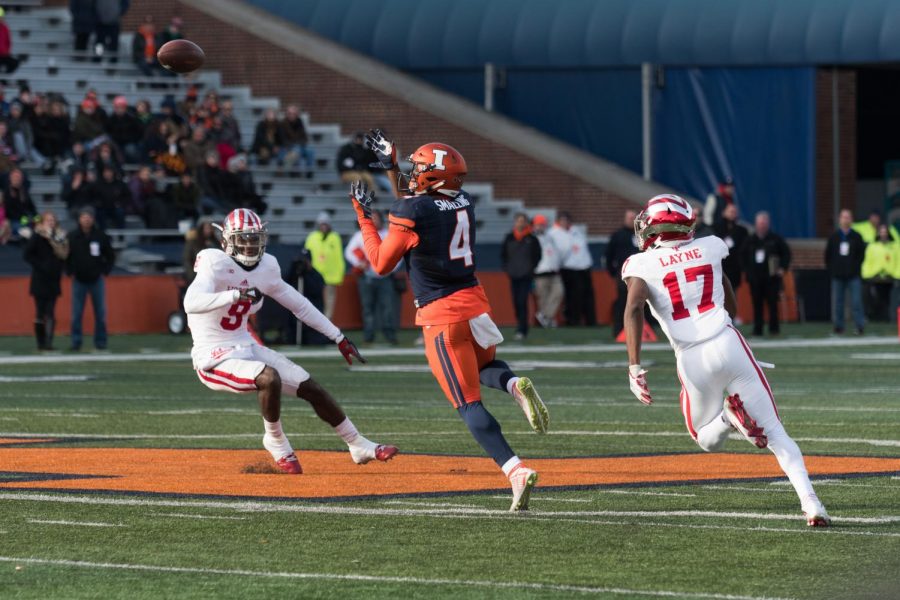 Sophomore wide receiver Ricky Smalling goes up for a catch in the game against Indiana at Memorial Stadium on Nov. 11, 2017. Smalling looks to highlight the Illinois offense this season as it switches to a spread style. Photo by: Quinten Shaw

Traditionally, the Big Ten is known for its hard-hitting, ground-and-pound style of play. With many programs across the country adopting an up-tempo, spread offense in the new era of mobile quarterbacks, the Big Ten could become an outlier.

Penn State led the Big Ten conference with 290.2 passing yards per game, 23rd in the country. Otherwise, more than a few schools ranked towards the bottom nationally, as Illinois, Michigan, Maryland and Minnesota finished outside the top 100. Rutgers ended up with the 124 ranked passing offense, ahead only of schools that run the triple-option offense.

For the most part, the Big Ten stuck to its profile as a physical, defensive, run-heavy conference.

Ohio State, Wisconsin, Minnesota and Michigan all finished in the top 50 for rushing offense, nationwide.

Meanwhile defensively, Wisconsin and Michigan were the second and third-ranked schools in total defense. Ohio State and Michigan State cracked the top 10, with five other schools finishing in the top 40.

At Big Ten Media Days in Chicago, Ohio State head coach Urban Meyer argued teams do not need to follow a trend and instead scheme to the strengths of their personnel.

“I think it’s (about) best available player,” Meyer said. “We’ve won three national titles; two have been with drop-back quarterbacks (Chris Leak and Cardale Jones), also an undefeated season with a pro-style quarterback in Alex Smith. Then you had Tebow, Braxton Miller, and I put J.T. (Barrett) in the middle of both, so we fit whatever we have.”

Iowa coach Kirk Ferentz felt similarly, as he has battled many different styles of offense through his 19 seasons as head coach of the Hawkeyes.

“It’s like everywhere else, our conference is reflective of the entire nation,” Ferentz said. “There are teams that have gone that direction and that’s what they do. That’s the essence of coaching: Figure out where you’re at, what you can recruit to, what your coaches can coach and then you go from there.”

However, the conference’s perception could soon change. The addition of Scott Frost at Nebraska, whose Central Florida team went undefeated last season while averaging 530 yards per game, will bring that program a new look. In addition, Shea Patterson as quarterback for Michigan, a highly-touted recruit and transfer, is known for thriving in a spread offense.

Illinois could also be apart of that change, as Lovie Smith hired offensive coordinator Rod Smith out of Arizona, who is expected to use the quarterback position as a running threat in the Illini’s new offensive scheme.

Smith feels an added weapon under center could free up his receivers on the outside and allow the team more of an opportunity to succeed.

“Guys know the history about playing in this offense, now it’s about getting it done each day,” Smith said. “A guy like Ricky Smalling will love playing in it. When you have an offense where the quarterback is a part of running too, that puts you in a one-on-one situation on the outside, wide receivers love that.”

When it comes to preventing up-tempo offenses from scoring, Indiana head coach Tom Allen has some experience. The long-time defensive coordinator feels controlling offense was the reason he was hired in the first place. He has familiarity with coaching against fast offenses in practice from his time at South Florida and Ole Miss, two programs known for filling up the scoreboard.

Allen feels comfortable stopping any style of offense, just as long as he can contain his opponent to playing one type of scheme.

“One of the reasons Kevin Wilson hired me is because I had been coaching on staffs where the offensive side of the football was a tempo offense,” Allen said. “The biggest thing I wanna make sure we do a great job of is controlling the tempo … as a defensive coach, I wanna be the one dictating tempo.”

As college football continues on the trend toward spread offenses, eyes will be on the Big Ten to see if they stay on their traditional course or make a change.