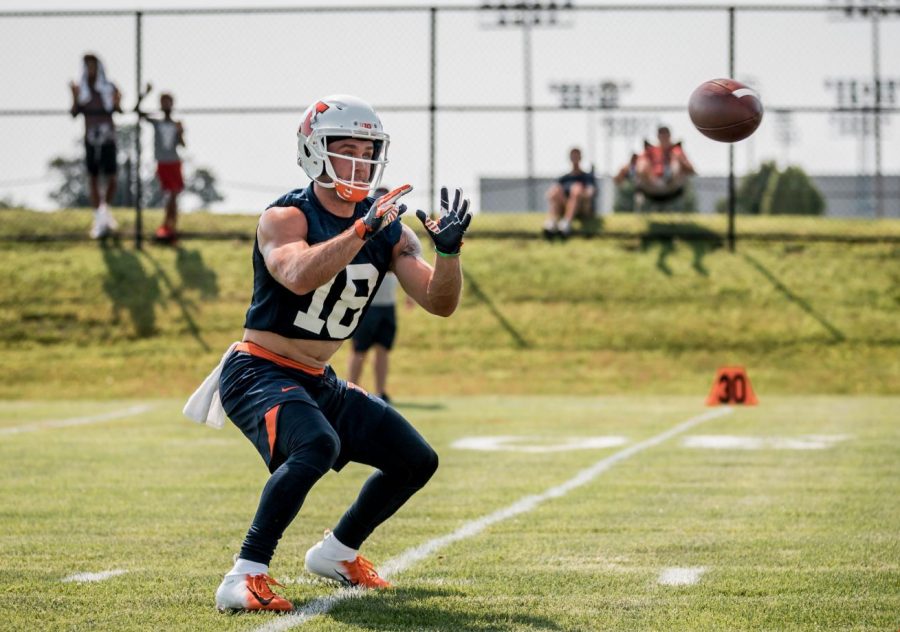 Wide receiver Mike Dudek gets set to catch the football at Illinois football training camp on Friday. Dudek looks to be a leader for the younger receivers and build a relationship with the new quarterbacks.

At this time last week, new Illini quarterback AJ Bush had not thrown a single ball to an Illinois receiver.

Nonetheless, on only the fifth day of Illinois football training camp, Bush trots over to sophomore wide receiver Carmoni Green to address a dropped ball.

“I got you,” Green said, understanding his teammate’s jovial tone.

An interaction like that is precisely what third-year Wide Receivers Coach Andrew Hayes-Stoker wants to see between his unit; a unit that consists of Bush and a crop of young quarterbacks battling for starting jobs.

The fifth-year player is no stranger to competition. Despite a journey that took him from Nebraska to Iowa Western Community College to Virginia Tech and now finally Champaign, Bush has yet to see the field as a starting quarterback.

Bush hasn’t thrown much in college — only 11 attempts in five games — but for the likes of senior receiver Mike Dudek and sophomore Ricky Smalling, who are expected to lead the receiving corps, his more reliable arm and generally smarter decision-making is a welcomed sight.

“It goes to show you the type of person (Bush) is,” Dudek said. “He’s a great leader. He plays with so much passion; one of the most passionate guys I’ve ever played with. You can tell he cares, and he’s going into his final season, so he’s competing hard for that starting quarterback position. He wants all the receivers to know, ‘You dropped a pass?’ He’s gonna be on you.”

The Naperville, Illinois, native also noted gradual progression between the timing of the receivers and the quarterbacks — Bush, sophomore Cam Thomas and the four freshmen, Coran Taylor, M.J. Rivers II, Matt Robinson and Drake Davis. Forming those quarterback-wide receiver relationships takes time, something that takes even longer when the reps at positions are split amongst a high volume of players.

While Bush splits time roughly even with Thomas, Robinson is also getting a solid portion of work. Behind them, Rivers, Taylor and sophomore Cam Miller each continue to get looks from first-year Offensive Coordinator Rod Smith.

Out wide, Dudek and Smalling are the top choices, but each player has been sharing a lot of reps with younger and less proven talents. Highly-rated Green, sophomore Coffeyville Community College transfer Dominic Stampley, senior Sam Mays and converted senior linebacker Justice Williams have all been getting lots of looks in camp.

During practice on Tuesday, Hayes-Stoker gathered his unit toward the end of the day to express his disappointment in their performance, lamenting how some of the receivers used the wet grass as an excuse for their mistakes.

“The expectation I have for those guys is that they don’t lose sight of the goal,” Hayes-Stoker said. “When I’m yelling at them and the competition is on, sometimes they rush the routes. Sometimes some of the small details that are important are forgotten.”

The goal, for players to keep their heads down, make plays and help Illinois win, was lost at times on Tuesday for Hayes-Stoker’s group. He let them know of his disappointment, but that’s nothing unusual for him. It’s just a part of his job, as he tried to demand the most possible from his players.

But Hayes-Stoker has also seen things from his receivers that have given him a bright sense of optimism through the early days of camp. For example, the way Bush got up in Green’s face after that dropped pass. It’s exactly what he wants from a veteran quarterback and a young receiver.

“They’re helping each other a lot,” Hayes-Stoker said. “Carmoni (is) doing a lot better. It’s good because guys need encouragement, they need that. So it’s good that they care about each other enough to do that.”