Clark appreciating intensity from his defensive line at training camp 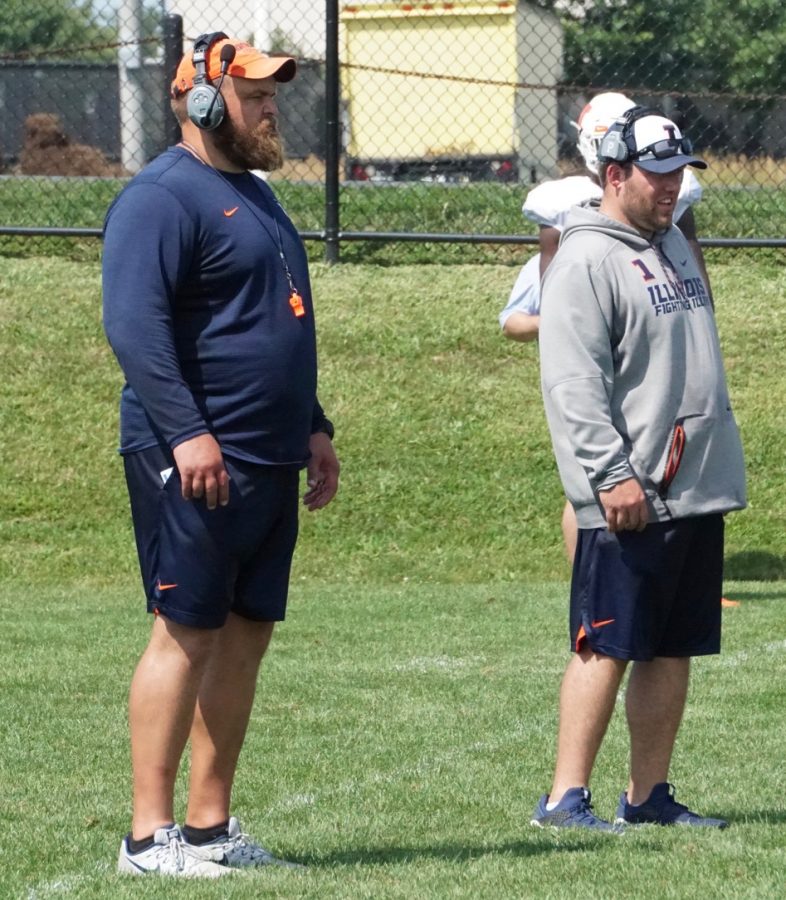 One-on-ones between offensive and defensive lines are a staple of any football practice, pitting the strong against the strong in battles of brute strength and refined technique.

At one point, after sophomore guard Vederian Lowe boxed out sophomore defensive end Owen Carney Jr. and Butkus let them duke it out instead of blowing the play dead, the pair got into a scuffle and had to be separated.

Both Clark and Butkus demanded each player get right back on the line of scrimmage and go at it again.

“In one sense, it shows you that those guys do want to win both very badly,” Clark said. “But it’s also one of those things, it’s like getting in a fight with your little brother. Get down, play the next play and let’s do it between the whistles.”

Another scuffle today in OL vs. DL one-on-one's. Seems like Butkus & Clark's high energy is carrying over to the #Illini

The moment the play was live, Carney exploded with a burst to blow by Lowe, flying into the backfield.

“It felt good,” Carney said after practice. “But everybody gets got. It’s about what you’re going to do in the next round.”

He falls under the same train of thought his coach does when it comes to the occasional extracurriculars that come about as a result of intensity on the practice field.

“We get after it, man,” Carney said. “Even me today, I got into it with Vederian Lowe, but it’s just good competition, it’s iron sharpening iron. At the end of the day, he’s going to get me better just like I’m going to get me better. In the game, I doubt the other player on the other side of the ball is going to let up, so why would I do that in practice?”

The line is showing early signs of a driving desire to win and compete, Clark said, and he wants to see a lot more of it.

Last season, Illinois’ defensive line was the worst in the Big Ten defending the run and one of the worst in the country (No. 116, allowing 218.5 yards per game). Tied for 102nd in the country in team sacks (1.58 per game) and tied for 115th in team tackles for loss (4.4 per game), the Illini struggled severely to get enough pressure to disrupt opposing quarterbacks.

Clark has his theory about why the Illini were so poor defensively before his arrival in the spring.

“People always talk about sacks; it’s one of those things where if you don’t stop the run on first and second down, you’re never going to get those opportunities,” Clark said. “We’ve got to stop the run first and that starts with us four up front.”

That idea seems to be supported by Illinois ranking 105th in third-down conversion defense (43.7 percent) last season. The Illini consistently gave up solid and large gains to opposing running backs, which would allow teams to get into plenty of third and manageable situations, where only a couple yards were needed to get the first down. This, combined with an offense that could only muster 174 first downs all year (No. 125 of 129 in the NCAA Division I Football Bowl Subdivision) and ranked 102nd in time of possession, meant the defense was on the field for a long time in games.

To avoid a tired defense that can be worn down steadily throughout games, the Illini have to be much improved against the run, according to Clark. To do so, he’ll need promising sophomore end Bobby Roundtree to step it up in the rush game, and he’ll need the likes of junior tackles Jamal Milan, Tymir Oliver and the rest of the unit to make significant strides in that part of their games as well.

Oliver, for his part, is thriving as one of the veterans in the unit. He’s expected to start, along with Milan, Roundtree and potentially sophomore Isaiah Gay on a unit that is eager to prove its ability.

“I know younger guys are looking up on me,” Oliver said. “I can honestly tell if I mess up one rep or jog or act lazy, I can look at the younger guys and say, ‘He did the same exact thing that I just did. I gotta fix that.’ I’m looking and I’m realizing that I have a huge impact and have to correct my mistakes as well.”

When he does mess something up, whether it’s trotting back from a play blown dead or not using the right technique, Clark is right there to give him a piece of his mind.

“He tells you,” Oliver said. “If you’re doing something that is not what a leader or a captain would do, he’ll tell you. ‘You don’t this, you don’t do that, you’re supposed to do this.’ I respect it, everything that he says.”

It’s not uncommon to be across the field and hear Clark do just that, whether he’s expressing disappointment, pride or giving instructions. He won’t be happy with anything other than relentless intensity from his guys. That concept has been a focus of his since he arrived on campus, and he’s hopeful that if his guys buy in completely, it will pay big time dividends on the field.

“Be a dominant player every single play,” Clarks said. “Don’t just be a third down, finesse guy, that can’t be our M.O. here. We want to put our hands on people every single day, strike blockers, get off and make plays.”