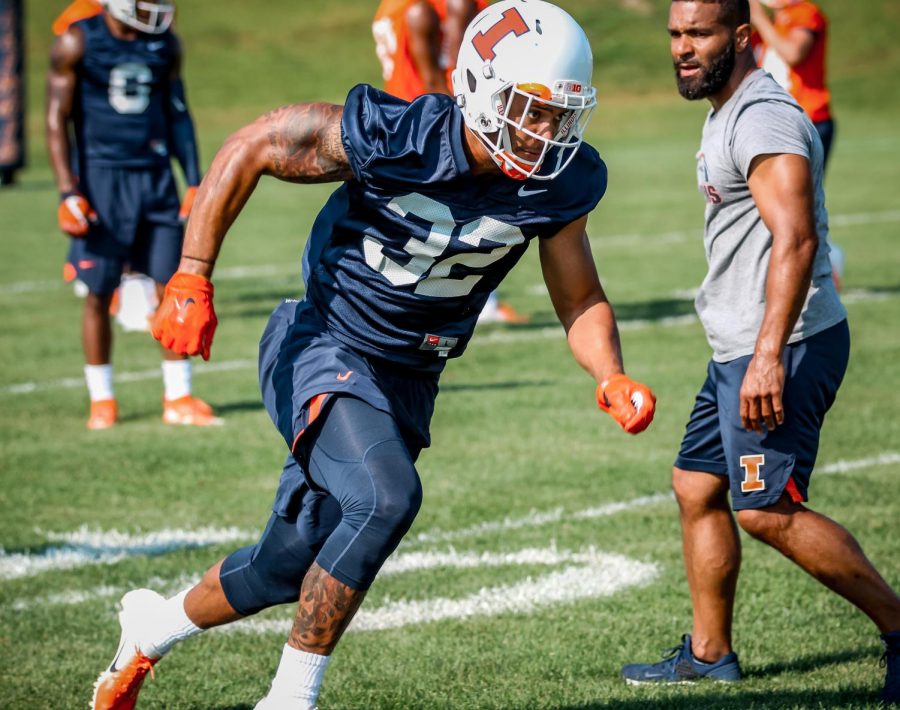 Senior wide receiver Justice Williams runs during Illinois training camp on August 3, 2018. Williams is transitioning from the linebacker position and quickly moving up the depth chart. Photo by: Illinois Athletics

On a Thursday night in the fall of 2017, linebacker Justice Williams got his shot.

“It’s going down,” Williams would tell former Illini quarterback Jeff George. “If I move to receiver, it’s going down.”

Williams lined up with Jaylen Dunlap, a former teammate who was, at the time, one of the team’s best defensive backs. The ball was thrown up in his direction, it was a simple fade route.

“It was like a one-hander, it was probably my best catch ever,” Williams said. “It was really cool.”

It’s now a catch that has been remembered by teammates and staff members alike, but more importantly, it’s a catch that must have caught the attention of head coach Lovie Smith.

Williams recounts a lot of the position switching talk as merely a joke. He had experience in the position from playing both linebacker and wide receiver in high school, at the end of the day, he was recruited to play defense.

But that didn’t stop him from confronting his head coach.

“I went up to Coach Smith’s office, jokingly asked if I could move to receiver, and then come springtime it actually happened,” Williams said.

Now that training camp has gotten underway for the Illini, the reality of Williams lining up at the receiver position is all too real.

Since day one of camp, Williams has been in the thick of things. New Illini Offensive Coordinator Rod Smith has not been shy about getting him involved, as Williams continues to be in the mix with first-string wideouts Mike Dudek, Ricky Smalling and Sam Mays.

“You have to run a lot on offense,” Williams said. “Let’s just put it this way, I had to run three step with linebacker, now I’m running 15 steps at receiver, it’s a lot more.”

The practice routine is only one adjustment Williams has experienced during the teams training camp that runs from Aug. 3 and caps off with a fan appreciation event on Aug. 18. The six-foot-three receiver has made sure to point out he has plenty to work on, even if it’s just the little things.

“One thing I know I needed to work on was how to stop,” Williams said. “Sounds kind of dumb, but one thing coming from linebacker to wide receiver, going at full speed and trying to stop on a dime is something I need a lot of help on.”

The help has come from teammates Ricky Smalling and Mike Dudek, two receivers that are looked at as potentially the offense’s top playmakers. Williams has praised the work his teammates have done to put him in the position he is today.

“(Justice is) a big strong receiver, go up and get the ball, still learning a few things but he will be ready by Kent State, I can promise you that,” Smalling said.

The transition has been rather smooth for Williams, and a lot of that can not only be contributed to his play in high school but his understanding of defensive schemes.

“In high school, it was, ‘hey man, go run a slant, go run a fade, go do a hitch,’” Williams said. “Now, it’s you got to read the coverages, so actually knowing what defenses do, what coverages look like, it makes making my route conversions a little bit easier.”

While Williams has been able to learn from the veterans at the position, he has been able to bring a different perception into the film room. He has worked with new freshman receivers to better their understanding of defensive coverages.

As for his individual play on the field during training camp, Williams has been pleased.

“I feel like I’m doing pretty well right now,” Williams said. “Just little things I need to catch up on, but we will get there.”

When it comes to the team as a whole, Williams has plenty of confidence to go around. With the season slowly inching closer and closer for the Illini, Williams has only one way to describe what’s going to happen game one.