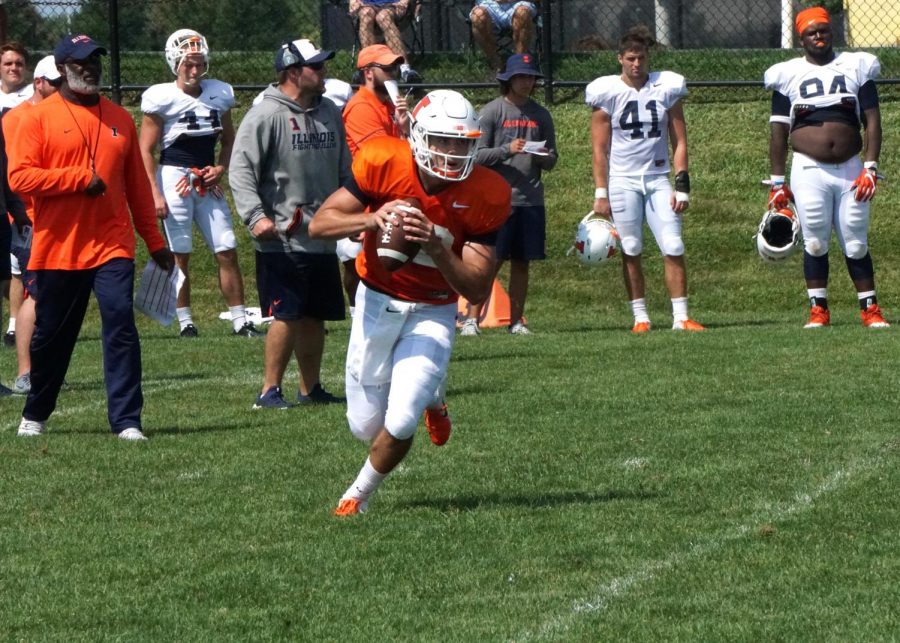 Quarterback Matt Robinson runs out of the pocket at training camp on August 10, 2018. Robinson is highlighting a group of freshman quarterbacks that looks to make an impact. Photo by: Gavin Good

Ahead of Lovie Smith’s third year, and with the arrival of his second recruiting class, Illinois football is set to be, statistically, the youngest team in the nation in 2018.

Underclassmen make up 76.5 percent of the Illini roster and the program only has nine seniors.

Similar to last season, Lovie’s recruits are going to have to play early. The season may be on the horizon, but plenty of competition is still going on in training camps and playtime is on the line.

As camp moves along, senior AJ Bush is beginning to separate himself as the coaching staff’s favorite play caller. On Monday, he continued along that path, looking more comfortable in the pocket after he had been a bit skittish at times when under pressure.

He connected with sophomore receiver Carmoni Green for a breakaway touchdown pass Monday after Green beat Nate Hobbs on a fly route. As Green stretched the distance between himself and Hobbs, Robinson delivered a near-perfect throw into his hands.

However, he’s not without his flaws — he has made some poor decisions and errant throws at times — but makes fewer mistakes than his fellow freshmen quarterbacks.

Robinson comes from southern California’s Trinity League, one of the best conferences in high school football. He feels his time at J Serra Catholic has prepared him well for the speed of the college game as well as new offensive coordinator Rod Smith’s high-octane offense.

Listed at 6-foot-1, Robinson is probably closer to 5-foot-11. During his recruiting, his smaller stature gave programs concerns, but he doesn’t think this gives him a disadvantage under center like others may think.

“Obviously, a lot of guys are taller,” Robinson said. “I’m about six feet, but they list me at 6-foot-1. You see guys like Drew Brees and Russell Wilson, Baker Mayfield. There are a lot of (shorter) guys, I think it’s a myth. You throw through windows, you can see over the line, it’s not a problem.”

Each is adjusting to the speed of the game at the Big Ten level, but say they enjoy the competition for playing time and reps.

“The way my high school went, I’ve had quarterback competition every year,” Rivers said. “Coming in, I know I’ve got to put forth my best effort and do everything I can to the best of my ability. (I want to) make sure that each and every one of the other quarterbacks is ready, too, so whoever’s number is called is ready to go when it’s the game.”

Taylor comes from a different situation at Peoria, where he was the unquestioned guy under center, but knows the competition will force him to play at a higher level.

“It’s different for me because I was used to taking all the reps,” Taylor said. “Now it’s like, every rep you get, you’ve got to make the best of it. When you’re not in, you’ve still got to take mental reps from the quarterback that’s in it before you.”

Norwood, Sims grinding away in backfield

The staff has said it likes Norwood’s speed, so he could see some action as a change-of-pace guy in certain situations. Both will likely play in 2018, but their action may depend on the health of those in front of them more than their own ability at this point.

Each back is being used in all aspects of Rod Smith’s offense, whether it be popping out into the slot for pass plays, being active in pass protection or taking the ball in the backfield.

The approach from the staff continues to be focused getting guys like Norwood and Sims ready for any situation.

Slaughter adjusting to level of play

Belleville, Illinois, product Jordyn Slaughter has seen a lot of meaningful reps in camp so far, especially for a true freshman who was only cleared for full contact within the last month after undergoing offseason shoulder surgery.

Typically working in the second unit of linemen, Slaughter said the biggest adjustment has been the tactical side of the game, specifically learning the new schemes in Rod’s offense. It’s a step up from being able to simply overpower defensive linemen like he was able to do in high school.

Coming to campus on the mend, Slaughter has had to catch up to some of the other newcomers since being fully cleared.

“My first month was pretty hard, conditioning with (strength and conditioning coach) Boese and in the weight room trying to get my strength back,” Slaughter said. “Working with (head football athletic trainer) Jeremy Bush, trying to work on my mobility and stuff like that. I think I’m coming along great. Like two weeks ago, we got in this thing called the bod pod, where it measures our body mass percentage. I’ve put on about 15 percent more muscle since I’ve come here. So that was a good thing for me. And I’ve dropped about 20 pounds since I’ve come here.”

Slaughter noted the best advice he’s received so far on how to fit into the picture on the line is simple: “Just work hard and keep my head down.”

“What Coach (Butkus) tells us is to be seen and not heard,” Slaughter said. “That’s a big thing for freshmen, not to be all loud-mouthed. Just to work hard and our hard work will show.”

Other freshman linemen have yet to see action like Slaughter — Reuben Unije has been held out of camp with an injury and Kievan Myers has yet to join the team in camp.

Martin among young standouts at defensive back

The clear strength for Illinois so far in camp has been the secondary. By returning the likes of ESPN Freshmen All-American Bennett Williams and welcoming in a new group of talented recruits, Illinois feels very good about its defensive backs.

Newcomers Jartavius Martin and Delano Ware are impressing and getting a lot of meaningful reps, though it looks like sophomores Kendall Smith and Michael Marchese could see more time on the field this year.

“I’m getting a lot of reps on the field and my coaches are helping me when I mess up,” Martin said. “Then I got the players helping me right beside me and encouraging me to do better each and every play.”

Like for many of the freshmen, one of the biggest jumps from the high school level to the college game is in the sheer amount of time football takes up. Guys just aren’t used to focusing solely on football from about 6 or 7 a.m. until around 9 p.m.

“Practices are much longer than high school practices and the schedule is harder working around,” Martin said. “You don’t have a lot of time to do a lot of things, but I’m adjusting pretty well.”

The Lehigh Acres, Florida, native has looked comfortable in the Illini secondary so far and he’s made some waves in the action so far too.

“The interception the other day at practice, you know that boosted my confidence a lot,” Martin said. “It let me know what I’m actually capable of and breaking up deep balls. I’m just working hard every day.”

Brown emerging as an option at nickelback

Expect a lot of nickel this year. Freshman Sydney Brown has moved from corner early on to nickelback, where he has looked surprisingly comfortable.

For Brown, who transferred from his Ontario high school to St. Stephen’s in Florida before coming to Illinois, the transition to so much football each day has been welcome. The under-the-radar recruit has demonstrated his ability early after the Illini were the only Power Five school to offer him.

The Illini have a wealth of young defensive back talent that has yet to be mentioned here, including freshmen Ron Hardge III, Kerby Joseph and Dylan Wyatt, who have all seen a solid number of reps (though Wyatt has been out recently with a knee injury).

Brown thinks the new blood is reflective of the direction the program is and has been traveling in so far during head coach Lovie Smith’s tenure.

“Losing is the past, looking forward, it’s a whole new season,” Brown said. “Just got to look ahead, stay confident and hopefully with all the new players we have coming in and with the freshmen from last year who had great success, hopefully we can make something happen this year.”