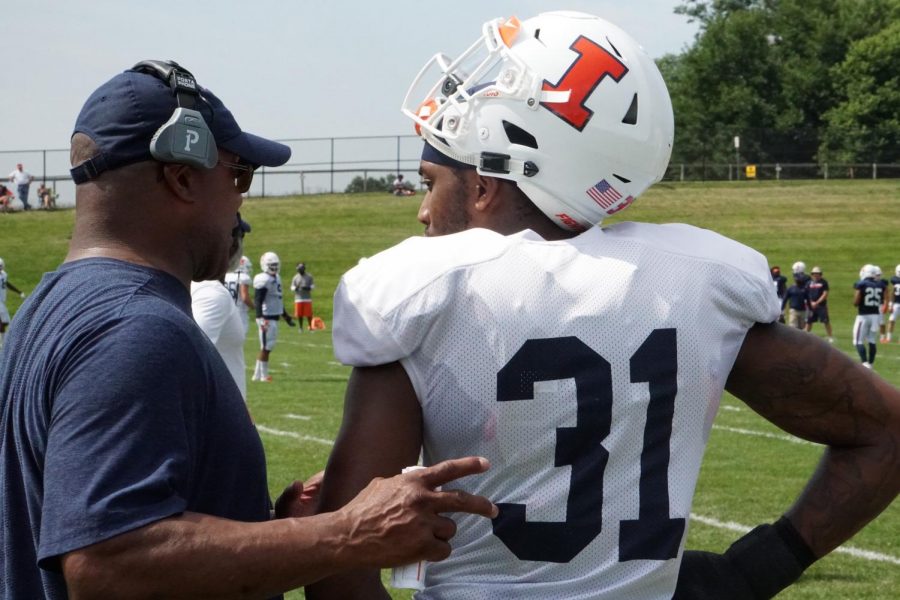 Assistant coach Gill Byrd speaks with Cameron Watkins during practice at Illinois football training camp on Wednesday. Byrd will be one coach that will have to makeup for the loss of cornerbacks coach Donnie Abraham after he left the team due to personal reasons.

After the resignation of cornerbacks coach Donnie Abraham for personal reasons on Tuesday, head coach Lovie Smith had to brush off his position coaching skills and step into the role himself.

It’s no matter of concern, Smith made sure to point out after practice.

After all, he has spent time coaching defensive backs at Tennessee (1993-1994) and Ohio State (1995). He’s also coached linebackers at the collegiate and pro levels, and while working under Tony Dungy as an assistant for the Tampa Bay Buccaneers, Smith helped develop the famed Tampa 2 defense.

“As a head football coach, they kind of keep us away from coaching a lot of the time,” Smith said. “You get an opportunity, you seize the moment.”

Losing a position coach two and a half weeks ahead of the season opener doesn’t allow much time for the team to replace Abraham. Although the situation isn’t new for Smith, who during his first two seasons functioned normally with only nine coaches instead of a full 10.

Along with that fact and Smith’s experience, passing game coordinator and safeties coach Gill Byrd brings a wealth of NFL experience working with corners — he was Smith’s cornerbacks coach in Tampa Bay in 2014 and 2015.

Smith’s youngest son, Miles Smith, who is in his first year on staff as a defensive graduate assistant, can also fill-in when needed. He’s worked primarily with the nickel backs, but will likely see an increased role in Abraham’s absence.

“We have things in place,” Smith said. “You know when you have a football team you have starters and then you have a backup plan, in case something happens. That’s what you have on your coaching staff, lots of us have a background (coaching cornerbacks).”

While Smith and his staff insist they are well-equipped to manage the change, it’s the players who will actually have to learn from a different source now.

Junior Cameron Watkins knows things are going to be different and they already have been the past two practices, but he feels the corners are in good hands with Smith and the rest of the staff. Smith brings a bit of a different coaching style to the unit, emphasizing some things differently, but maintaining the same schemes and techniques that were in place already.

“Coach Smith is a more hands-on type of guy,” Watkins said. “He wants us to know what everybody is supposed to be doing in coverages and the formations. Coach Abraham’s more technique-sound; he wants us more to be in tune with the cornerback position, although he did want us to know whatever everyone else was supposed to do. Coach Smith’s emphasis is more on the entire picture.”

Watkins has had three different coaches ahead of his fourth year at Illinois, so Abraham’s sudden move doesn’t faze him. His focus is on ensuring that the number of young freshmen in the group feel comfortable.

“For me, it’s a little easier to adjust,” Watkins said. “But for the younger guys, I’m trying to take them under the wing and try to make sure everyone is okay with the situation and knows what’s going on. To make sure we’re still in accord with everything we do.”

Sophomore Tony Adams acknowledged that it did hurt to lose Abraham, someone the corners had built relationships with after his first year and during the offseason. But like Watkins, Smith and the rest of the Illini, Adams believes the change will not affect much within the team or on the field.

His confidence in Smith mirrors what he had in Abraham. The Belleville, Illinois, native feels strongly that with the talent on the roster, new recruits and veterans alike, the cornerbacks and secondary will be solid for the Illini.

“Jartavius ‘Quan’ Martin is real athletic, Ron Hardge is very long so he can get his hands on you quick,” Adams said. “Then we got Dylan Wyatt, that’s my little man right there. Dylan, very energetic, he breaks on balls very well. And we’ve got Nick Walker, he brings that smooth-legged back, fast type of dude. We brought in a lot of speed, we brought in a lot of depth. I know they’re going to help us this season.”

Walker returning to practice after a serious-looking head injury has been a positive development for the Illini.

“It was real scary,” Adams said. “I’ve been knowing Nick for a little while. It’s always good to be back on the field with him.”

The coaching change and a few early injuries, combined with a number of college football pundits picking Illinois to finish last in the Big Ten West, have contributed to an intense hunger to win within the program, Adams said.

The Illini want to succeed in the faces of their doubters; it’d make it that much sweeter.

“We know what we’ve got to do,” Adams said. “We’ve just got to go out there and prove people wrong. It is a big chip (on our shoulder), playing like the underdog; you’ve got to love it.”